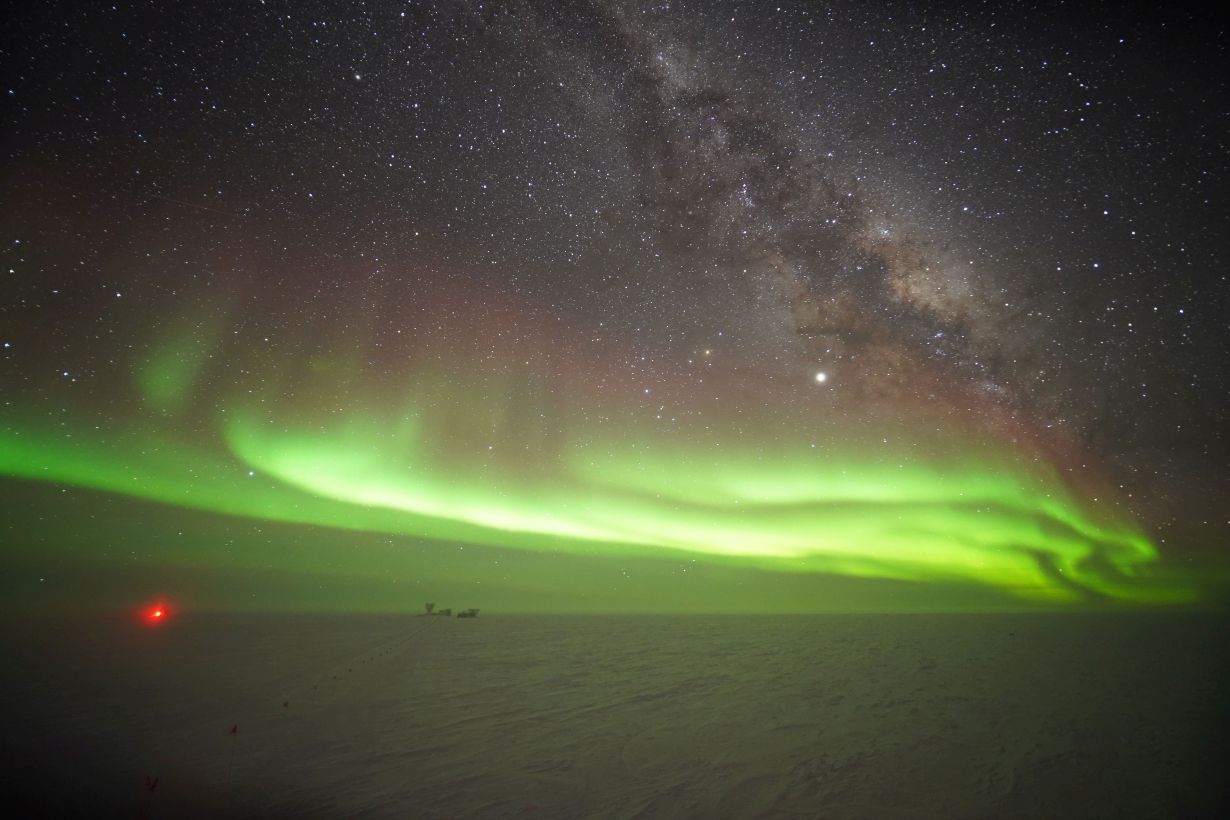 Polar light above the South Pole. The red point is the IceCube Laboratory. The neutrino experiment proper is installed several kilometers deep in the ice. (Photo: Kathrin Mallot, IceCube, NSF)

In 2017, the IceCube Neutrino Observatory that is part of the US-American Amundsen-Scott South Pole Station found convincing proof of a first source of high-energy cosmic neutrinos. Now, the observatory is being upgraded with German participation. The IceCube detector is being extended to also measure lower energies and, hence, the properties of neutrinos with so far unreached accuracy. In this way, understanding of basic processes in the universe, such as physics in galactic nuclei, will be enhanced. For this, international funding in the amount of about 37 million US dollars is provided. Karlsruhe Institute of Technology (KIT) will also be involved in the IceCube upgrade.

IceCube serves to measure high-energy neutrinos in an ice volume of one cubic kilometer. As neutrinos proper do not emit any signals, the tracks of myons are measured precisely. Myons are elementary particles sometimes produced by the interaction of neutrinos with ice. Contrary to neutrinos, myons carry an electric charge. On their way through the ice, they produce a characteristic light cone, the so-called Cherenkov radiation. Highly sensitive detectors measure this blue radiation. Currently, 5160 detectors on 86 cables are installed 1500 to 2500 m deep in the ice.

“Within the framework of the IceCube upgrade project, seven additional cables will be installed deep in the ice in the middle of the existing lines. They are equipped with 700 upgraded detectors,” says Dr. Andreas Haungs, Head of the IceCube group of KIT. “The ice in and around the detector is highly transparent, which is ideal to study the properties of very quick, i.e. relativistic, particles.”

The IceCube upgrade project in the amount of 37 million US dollars will be installed in the Antarctic summer 2022/23, partly financed by the USA with 23 million dollars from the “NSF Mid-scale Research Award”. The planned IceCube upgrade detector will consist of two different types of optical modules to test two technologies for the future tenfold enlargement of IceCube, IceCube-Gen2. One of the new optical sensors, the multi-Pixel Digital Optical Module (mDOM) was developed in Germany by groups at the universities of Erlangen-Nuremberg and Münster and by the German Electron Synchrotron DESY. DESY and KIT, as research centers of the Helmholtz Association, finance the construction of 430 mDOMs with a total of EUR 5.7 million. Compared to previous modules, mDOM has a much larger and segmented detection area, as a result of which a much higher sensitivity is reached.

The Federal Ministry of Education and Research (BMBF) supports the collaboration of large-scale research institutes and universities in the IceCube project, an example being the development of optical and acoustic devices for the precise calibration of the detector, simulation and calibration methods, and the development of novel sensor concepts for IceCube-Gen2. “Together with measurements of other signals from the depth of the universe, such as cosmic rays, high-energy gamma quanta, or gravitation waves, the IceCube upgrade experiment will contribute decisively to solving the mysteries of physics of highest-energy processes in our universe,” expects Andreas Haungs.

The IceCube Neutrino Observatory is located at the Amundsen-Scott South Pole Station, directly at the geographic South Pole. The science program is executed by the international IceCube collaboration of more than 300 scientists from 52 institutes in twelve countries. After the USA, Germany is the second important partner of IceCube. On the German side, the Helmholtz centers Deutsches Elektronen Synchrotron DESY and Karlsruhe Institute of Technology (KIT) take part. In addition, the universities of Aachen, Berlin (Humboldt-Universität), Bochum, Dortmund, Erlangen-Nuremberg, Mainz, Munich (Technische Universität), Münster, and Wuppertal are involved.