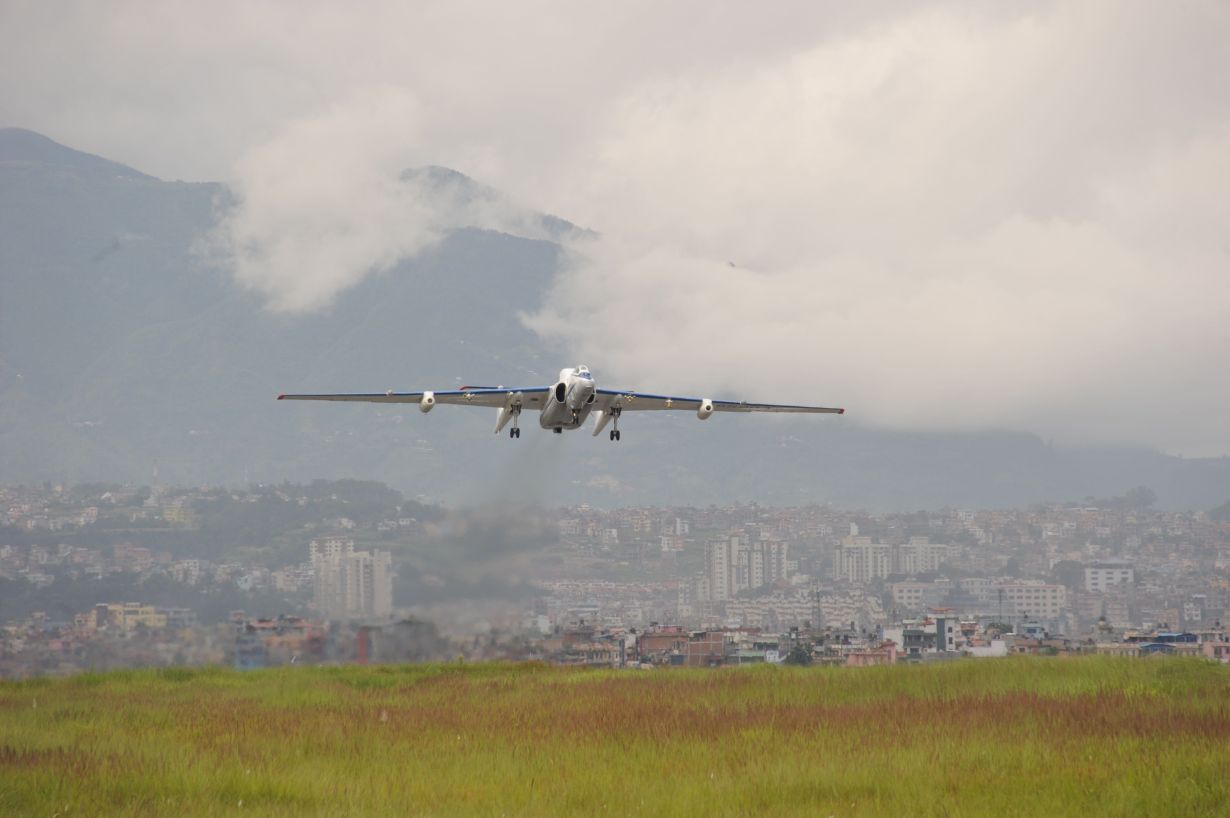 The Asian tropopause aerosol layer (ATAL) is located at twelve to 18 kilometers height above the Middle East and Asia. This accumulation of aerosols in the Asian monsoon was discovered first in 2011. Its composition and effect, however, have been unknown so far. A European consortium of scientists has now found at this layer consists of crystalline ammonium nitrate. In the AIDA cloud chamber, climate researchers of Karlsruhe Institute of Technology (KIT) demonstrated how this substance is formed in the upper troposphere. The results are reported in Nature Geoscience.

Using a smart combination of remote sensing, in situ measurements, meteorological model calculations, specific laboratory measurements, and detailed numerical simulations, the team studied the distribution and composition of aerosols in the ATAL. Aerosols are smallest suspended particles from a variety of natural and anthropogenic sources. In the atmosphere, aerosols act as condensation nuclei to which gaseous water vapor attaches and, thus, forms cloud droplets. For the first time, a research aircraft flew through the upper levels of the Asian monsoon to study key processes of global importance. The different methods and instruments complemented each other to verify the measured results. Scientists from KIT, Forschungszentrum Jülich (FZJ), Johannes Gutenberg University and Max Planck Institute for Chemistry, both in Mainz, Alfred Wegener Institute, the University of Wuppertal, Laboratoire de Métérologie Dynamique, Paris, and the Istituto di Scienze dell’Atmosfera e del Clima, Rome, took part.

“Surprisingly, we detected crystalline ammonium nitrate as a main constituent in large parts of the ATAL,” says Dr. Michael Höpfner from the Atmospheric Trace Gases and Remote Sensing Division of KIT’s Institute of Meteorology and Climate Research (IMK-ASF). The unexpected results measured, among others, by the GLORIA instrument of KIT and Forschungszentrum Jülich were then confirmed by climate researchers at KIT’s AIDA cloud chamber: “Our experiments revealed that, contrary to the prevailing opinion, liquid ammonium nitrate droplets crystallize to solid particles at minus 50 degrees in the presence of small, mainly sulfur-containing pollutions. These solid particles continue to exist even under temperature and humidity conditions of the upper troposphere,” says Dr. Robert Wagner from the Atmospheric Aerosol Research Division of KIT’s Institute of Meteorology and Climate Research. With satellite observations, the researchers indeed found large amounts of ammonium nitrate aerosols above Asia. These observations reach back into the year 1997 when the ATAL was not yet supposed to exist.

“With this, we have solved the long-standing puzzle of the composition of ATAL,” says Michael Höpfner. So far, it has been considered highly improbable that this aerosol exists at such high altitudes, because the precursory ammonia gas is washed out of the atmosphere very quickly by rain. “But we detected unparalleled ammonia concentrations during the Asian monsoon: the values are up to fifty times higher than in previous measurements,” Höpfner adds. This ammonium mainly originates from agriculture, in particular from lifestock farming and fertilization. The highest ammonia emissions are currently found in Asia. During the monsoon, polluted air masses are transported from the land surface to heights of up to 18 km. Here, ammonia reacts to ammonium nitrate, an aerosol that influences both the formation and properties of clouds.

“It is now for the first time that our data prove that ammonium nitrate aerosols are omnipresent in the upper troposphere during the Asian monsoon,” Höpfner says. These results are relevant in particular to the interactions of clouds and aerosols, which represent one of the biggest uncertainties in climate modeling. Moreover, the findings prove that ammonia emitted on the ground has a big influence on the processes in the upper troposphere and potentially on the Asian climate.

The aircraft campaign was part of the StratoClim project in which 37 scientific organizations from eleven European countries, the USA, Bangladesh, India, and Nepal collaborate under the direction of the Alfred Wegener Institute, Helmholtz Centre for Polar and Marine Research. The high-altitude aircraft M55-Geophysika carried 25 specially developed instruments to heights above 20 km, about twice the height usually reached by airplanes. A major instrument on board of Geophysika was the infrared spectrometer GLORIA (Gimballed Limb Observer for Radiance Imaging of the Atmosphere) measuring height distribution of a variety of trace gases along the flight path. Measurements during the flights mainly concentrated on ammonia, as it is largely involved in the formation of aerosol particles. GLORIA presently is the only instrument that can measure ammonia at these heights.

Based on the data measured by the satellite instrument MIPAS (Michelson Interferometer for Passive Atmospheric Sounding) of KIT’s IMK-ASF for height distribution of more than 30 trace gases between 2002 and 2012, the scientists for the first time acquired the global distribution of ammonia and ammonium nitrate at the same time. For their studies, they also used the AIDA (Aerosol Interactions and Dynamics in the Atmosphere) facility on KIT’s Campus North. It is the only facility worldwide, where aerosol and climate processes can be studied under atmospheric conditions. In the facility, all temperature and pressure conditions in the lower and middle atmosphere can be simulated.