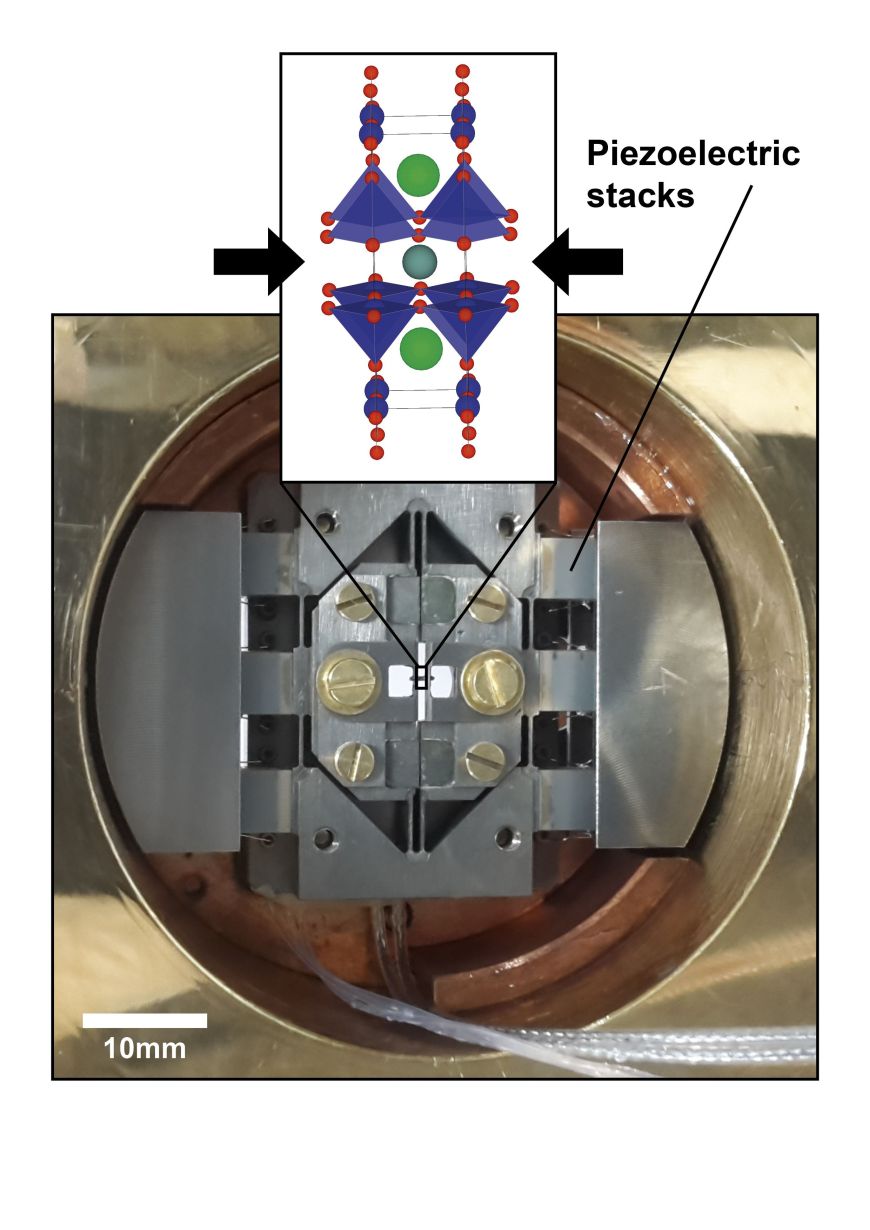 To apply controlled pressure to their microscopic superconducting sample (graphics), researchers use sensitive brackets with actuators based on the piezoelectric effect. (Fig.: KIT)

High-temperature superconductors can transport electrical energy without resistance. Researchers at Karlsruhe Institute of Technology (KIT) have carried out high-resolution inelastic x-ray scattering and have found that high uniaxial pressure induces a long-range charge order competing with superconductivity. Their study opens up new insights into the behavior of correlated electrons. The researchers report on it in the Science journal  (DOI: 10.1126/science.aat4708).

Researchers led by Professor Matthieu Le Tacon, director of the Institute of Solid-State Physics (IFP) at KIT, have now made a significant step forward: they have shown that high uniaxial pressure can be used to tune the competing states in a high-temperature superconductor. In addition to IFP at KIT, the Max Planck Institute for Solid State Research in Stuttgart, the Max Planck Institute for Chemical Physics of Solids in Dresden, the European Synchrotron Radiation Facility (ESRF) in Grenoble, France, and the Universidad Nacional de la Plata in Argentina took part in the study. The results are presented in the Science journal.

In the charge ordered state, the electrons ‘crystallize’ into stripe-shaped nanostructures. This electronic state is usually observed in these materials when superconductivity is suppressed using very large magnetic fields, making it hard to investigate using conventional spectroscopic tools.

Inducing this state in YBa2Cu3O6.67 using uniaxial pressure instead of magnetic fields allows to study its relationship to superconductivity using x-ray scattering, as the researchers from Karlsruhe, Stuttgart, Dresden, Grenoble and La Plata discovered in their work. They have in particular been able to identified strong anomalies of the lattice excitation conneted to the formation of the charge order. “Our results provide new insights into the behavior of electrons in correlated electron materials and into the mechanisms yielding to high-temperature superconductitivity” explains Professor Matthieu Le Tacon from KIT. “They also show that uniaxial pressure has the potential to control the order of the electrons in such materials.”