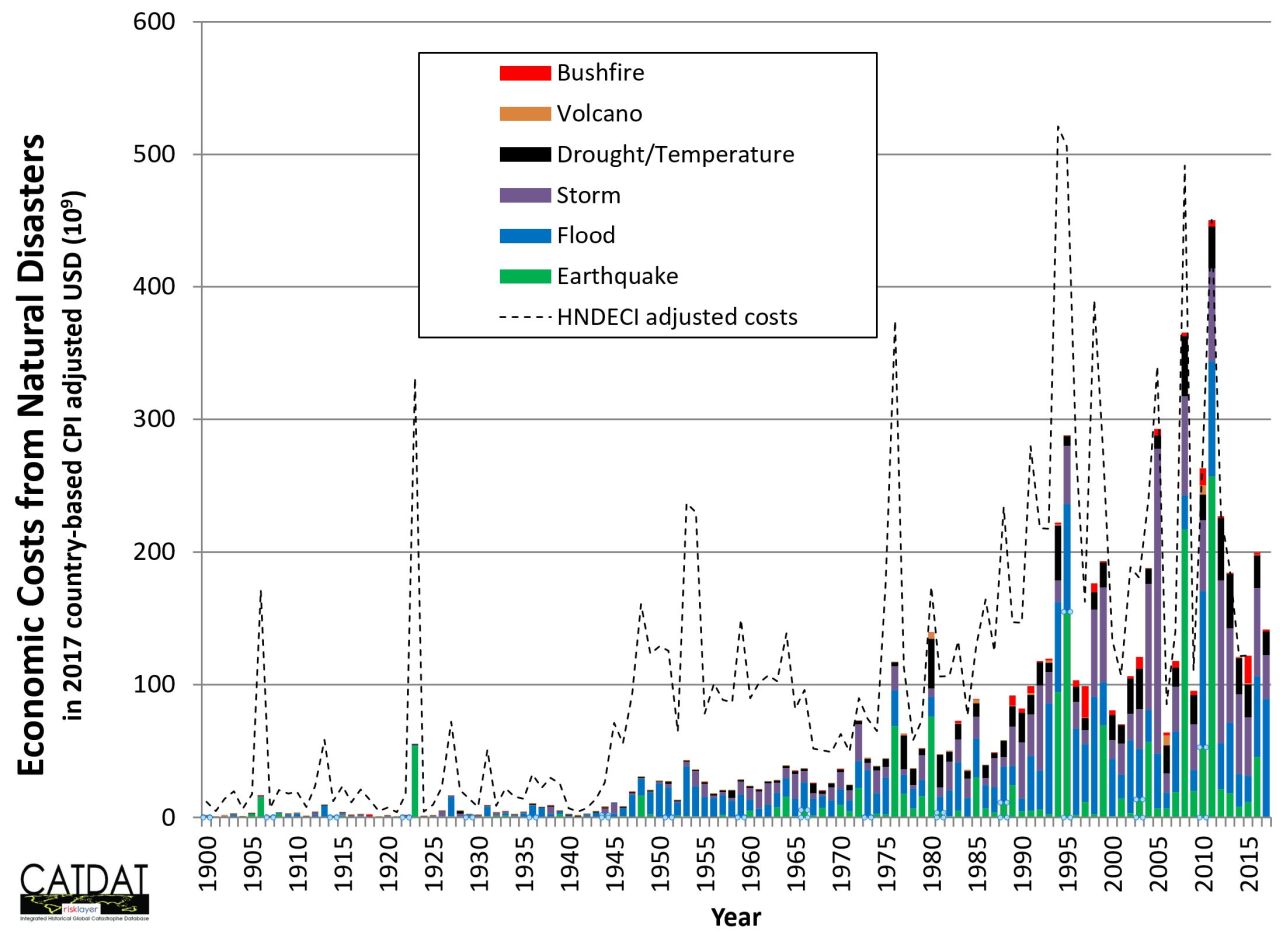 Due to Hurricane Harvey, this is now the 8th year in a row where global losses have exceeded 100 billion USD. (Figure: KIT)

Hurricane Harvey, which at the beginning of the week has hit the US state of Texas with devastating damage and now rages over Louisiana, is in third place among the world’s most expensive storm disasters. This was found out by researchers at Karlsruhe Institute of Technology (KIT). Their estimated expected damage of around $58 billion for Texas alone puts this ravaging tropical storm already now among the ten most expensive natural disasters since the year 1900. Depending on how the weather patterns and flooding develop, the cost could increase to over $80 billion.

"The direct damage itself is extensive,” says geophysicist James Daniell who researches at KIT’s Geophysical Institute and Center for Disaster Management and Risk Reduction Technology (CEDIM) and points out that “depending on how the weather develops during the next few days, we may see this estimate rise.” The actual damage may amount even to at least $80 billion, depending on the assumptions providing the basis for the calculations. In the past ten years, only hurricane Sandy, which devastated the East Coast of the US in 2012, caused greater damage: The loss then amounted to $70 billion. Hurricane Katrina, which inundated large parts of New Orleans in 2005, was even more expensive: The direct economic damage amounted to $160 billion. Katrina, which claimed 1833 human lives, is considered one of the most devastating natural disasters in the history of the United States. Harvey so far has killed about 30 people.

Ninety percent of the damage modelled so far by Harvey have been due to flooding,” Daniell says. Only about ten percent of the calculated damage was caused by high wind speeds of up to 212 km/h. Residential real estate is the most severely affected by the storm, Daniell estimates the damage at $19 billion. Whereas damage to government property and infrastructure is estimated by the CEDIM researchers at $18 billion, damage to commercial and industrial property is assumed to amount to $16 billion, and damage to consumer goods such as vehicles is estimated at $5 billion. “Losses thus amount to three percent of the gross domestic product of the state of Texas,” Daniell says. According to him, the state’s built inventory has an equivalent value of $4.5 trillion. “Approximately one percent of that inventory is likely damaged; but it is the indirect losses in this event that will be large due to the large disruption.”

Daniell has obtained these data by means of a risk model he developed to calculate the direct economic damage after natural disasters since 2009. To this end, he has created a natural disasters database comprising 60,000 entries (CATDAT) since 2003. According to CATDAT, one third of the overall economic damage of $7 trillion since the year 1900 is attributable to flood disasters. Whereas earthquakes have caused 26 percent of that damage, storms have been responsibe for 19 percent, and volcanic eruptions have caused only one percent of the losses. The lead position is held by the Tohoku earthquake of March 2011. At the Pacific coast of Japan, almost 19000 people lost their lives. Damage amounted to the incredible sum of $218 billion. “In absolute annual terms, economic damage through natural disasters has increased over the past hundred years,” Daniell explains. Whereas, over that entire period, flood disasters have been the biggest causes of economic damage, the more recent past since 1960 has experienced destructive storms and storm tides to be contributing as much as 30 percent.

CATDAT relies on socioeconomic indicators such as building data, the Human Development Index (HDI), or gross domestic product, and provides the basis for the damage model supporting governments and aid organizations in estimating the extent of a disaster and in disaster management. It was successfully applied in many disasters already including the Tohoku earthquake in Japan and during typhoon Haiyan in the Philippines. The relevant information has been compiled by Dr. Daniell since 2003 from worldwide online archives, books, reports of institutions, publications, and other data.  The database is being updated annually.

For a first summary of the incident and a detailed description of the damage estimates, please refer to the CEDIM report on hurricane Harvey at http://www.cedim.de/download/FDA_Harvey_2017_report1.pdf