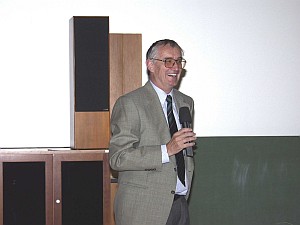 Robert Klanner is granted the 2016 Julius Wess Award by the KIT Center for Elementary Particle and Astroparticle Physics (KCETA) of Karlsruhe Institute of Technology (KIT). The Austrian experimental physicist is professor emeritus of the University of Hamburg. Klanner receives the award for the development of the fundamentals underlying silicon trackers. In the past 33 years, their use has led to the discovery of new particles and measurement of their properties. Media representatives are invited to attend the award ceremony on March 03, 2017, 3 pm.

Robert Klanner is granted the 2016 Julius Wess Award for his fundamental contributions to the development of silicon microstrip detectors. These instruments designed with microelectronics methods can very precisely measure the tracks of decay particles of heavy elementary particles. The measurement principle is based on the fact that some heavy elementary particles, such as the top quark or Higgs boson, decay into heavy quarks that fly a short distance through the detector before they also are subject to decay. From the precise measurement of daughter particles, conclusions can be drawn with respect to the origin of the parent particles. The first application for which silicon track detectors were designed in the early 80s was the investigation of mesons with charm quarks. Their lifetime measurement provided information on the so-called weak force. The detectors constructed in Munich and at CERN had about the size of a chip used for digital cameras.

Work of Klanner was the basis for the rapid development of microstructured silicon detectors in high-energy physics. Now, silicon track detectors are applied in every modern particle physics experiment. Discovery of the heaviest elementary particle, the top quark, announced by the Fermilab in Chicago in 1995 required a silicon detector with a sensitive area of several square meters. The world’s largest silicon detector with a sensitive area of 220 m² is found in the CMS detector of the LHC accelerator ring at CERN. For 20 years now, several institutes of KIT have made important contributions to these experiments, also in cooperation with the institute headed by Robert Klanner. Silicon detectors will continue to play an important role in the future, for instance in the search for exotic particles beyond the standard model and for studies of the Higgs boson.

Robert Klanner, born in 1945, studied in Munich and was conferred his doctorate in the early 70s in Protwino in the then USSR. After that, he worked for a short period at the University of Illinois, Urbana in the USA before he moved to the Max Planck Institute for Physics, Munich, in 1975. In 1984, he went to work with DESY, Hamburg, and to contribute to the construction of the ZEUS experiment in the HERA accelerator ring. Klanner assumed a number of executive functions for the ZEUS experiment, among others that of a spokesperson of the collaboration. In 1996, he was appointed professor by Hamburg University. From 1999 to 2005, he was Research Director of DESY. Robert Klanner also was long-standing member of the Executive Board of the Deutsche Physikalische Gesellschaft (DPG, German Physical Society) and co-editor of the scientific journal “Nuclear Instruments and Methods in Physics Research A”.

Program of the Award Ceremony
(The ceremony will be in English)

The Julius Wess Award is named after Professor Julius Wess who worked tirelessly in the area of theoretical and experimental elementary particle physics during his 20 years of employment with Karlsruhe University, today’s KIT. During this time, he published work of outstanding international importance. Field theory terms, such as the Wess-Zumino effect or the formulation of the first super-symmetrical quantum field theory, the Wess-Zumino model, will forever be associated with his name. The Julius Wess Award of the KIT Elementary Particle and Astroparticle Physics Center (KCETA) is endowed with EUR 10,000. The research award is granted to elementary particle and astroparticle physicists for exceptional experimental and theoretical scientific achievements which expand and deepen our understanding of the fundamental laws of physics.

Since its establishment five years ago, the KIT Foundation has been promoting research, education, innovation, and academic life at KIT. As a non-profit foundation under public law, the KIT Foundation finances its tasks nearly exclusively through donations by friends and sponsors. More information about the KIT Foundation can be obtained at its office or at www.stiftung.kit.edu.

At the KIT Elementary Particle and Astroparticle Physics Center (KCETA), 360 employees are working to develop a strategy for future developments in this discipline. The Center covers nine scientific topics of experimental and theoretical nature, which ultimately focus on the origin, development, and state of the universe and the processes taking place in it.