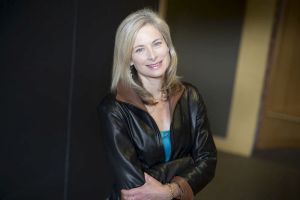 The Center for Elementary Particle and Astroparticle Physics  KCETA of the Karlsruhe Institute of Technology (KIT) will present the 2015 Julius Wess Award. The award goes to Professor Lisa Randall, an American theoretical physicist and author from Harvard University. Randall will receive the award for her research on unifying the fundamental forces of physics. Media representatives are welcome to attend the award ceremony on Friday, July 8, 2016 at 3 p.m. at KIT Campus North.

In her presentation “Dark Matter and the Dinosaurs: The Astounding Interconnectedness of the Universe” the award winner will bring together the interconnectedness of the universe with developments on our planet in her own unique way. She is a proven expert in communicating even complex concepts of physics in a clear and understandable way.

“Lisa Randall has established a promising line of research and has shown that higher-dimensional theories exist, which combine gravitation with other physical interactions,” Professor Thomas Hirth, Vice President for Innovation and International Affairs at KIT, explains. “Together with other highly respected efforts in the field of supersymmetry she is building on Julius Wess's works at KIT in an impressive way, and has significantly deepened our understanding of the laws of physics.” Randall has recently devoted herself to dark matter, a field that is also being researched at KCETA at the theoretical and experimental levels.

Lisa Randall is the second of three daughters of a sales representative and a teacher from Queens, New York. In 1980, she graduated from the sciences-oriented Stuyvesant High School in Manhattan, New York. She went on to study at Harvard University (bachelor's degree 1983) where she earned her doctorate under Howard Georgi with her thesis “Enhancing the Standard Model” in 1987. Lisa Randall subsequently held professorships at MIT and in Princeton before returning to her alma mater in Harvard. She has written four highly respected popular-scientific books which have been translated into many languages. She was included in Time Magazine's list of 100 most influential women in the world. Lisa Randall wrote the libretto for the opera “Hypermusic Prologue: A Projective Opera in Seven Planes” (music: Hèctor Parra), which has been shown in seven states so far.

The Julius Wess Award commemorates Professor Julius Wess who worked tirelessly on theoretical and experimental elementary physics during his twenty years at the Karlsruhe Institute of Technology, and who published works of internationally outstanding importance during this time. Field-theoretical terms such as the Wess-Zumino effect or the formulation of the first supersymmetrical quantum field theory, the Wess-Zumino model, will forever be associated with his name.

The research award is presented to elementary particle and astroparticle physicists for exceptional experimental or theoretical achievements, which expand and deepen our understanding of the fundamental laws of physics.

At the KIT Center Elementary Particle and Astroparticle Physics (KCETA), 360 employees are working to develop a strategy for future developments. The center focuses on nine experimental and theoretical areas, which ultimately lead to questions on the origin, the development and the state of the universe and its activities.

Program of the ceremony:

5:35 p.m. Dark Matter and the Dinosaurs: The Astounding Interconnectedness of the Universe, Lisa Randall, Harvard University

Followed by a reception