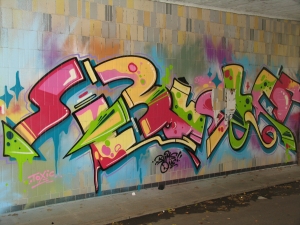 Graffiti are omnipresent: Artistically interwoven signatures can be found in subways, on walls, and on trains. Some consider the tags and styles of young graffiti writers willful damage to property, others understand them as an expression of creativity that brings color into the urban gray. Scientists of Karlsruhe Institute of Technology (KIT) and the University of Paderborn now cooperate to establish the “Informationssystem Graffiti in Deutschland” – InGriD – (Information system on graffiti in Germany). This information system will help study this phenomenon in interdisciplinary cooperation.

“For many scientific disciplines, graffiti are a highly interesting field of research,” Professor Martin Papenbrock says. The art historian of the KIT Institute for History of Art and Architecture cooperates with linguist Professor Doris Tophinke of the University of Paderborn to collect and store 120,000 photographies of graffiti. This large digitization project is aimed at systematically acquiring the photos and making them accessible and evaluable for scientific research. The graffiti are painted on walls or bridge pillars with spray cans, markers, or paint rollers. They are figurative representations or often only words and names that are distorted or decorated figuratively. This makes them interesting for writings- and image-based research. 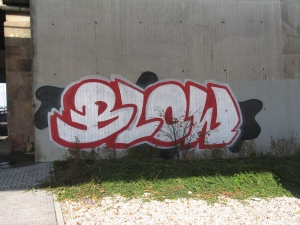 A throw-up is a simple, rapidly produced, two-colored pictorial graffito, consisting of outlines and fill-ins. It is also called “quickpiece” or briefly quickie. If the fill-in is sprayed in silver color, this is referred to as “silver piece” (briefly silver) or “chrome”. (Photo: Paderborn University). 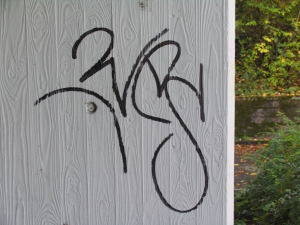 Tags are linear signatures of sprayers. They are made with the spray can or colored pen. They are encountered isolated or as a signature of a larger, pictorial graffito (writing/style). Comments are often designed in the tag style. (Photo: Paderborn University)

For the Information System on Graffiti in Germany, the photos that are mostly kept in public archives or institutions are classified into language- and image-related categories and provided with exact data. Later on, these photos can be found in the database when looking for the place or time of the photo or for certain criteria, such as the color and technique or the carrier medium, such as a noise barrier or a power box. “For the first time now, it is possible to study graffiti on the basis of a large data volume,” Papenbrock says. The photographies were taken from 1983 to 2015 in Mannheim, Cologne, and Munich. It is planned to further extend the documentation spatially and temporally. “Mannheim is an excellent example, because the photos, of which some date back to the 1990s allow for the development to be pursued over a period of 15 to 20 years,” the art historian says. Among others, it is possible to find out how long some of the mostly young actors are active and how graffiti spread in urban space. Hence, the Information System on Graffiti in Germany is not only of interest to the history of art and linguistics, but also a source of information for ethnology and sociology, cultural and media sciences. “Graffiti show where the places of action of young people are and give planners of urban quarters important hints as to where urban conflict zones are located,” Papenbrock says.

The project scheduled for a duration of six years will start in April 2016 and be funded by the German Research Foundation with EUR 850,000 for the first three years, with this amount being equally shared by the two universities. InGriD is developed with the technical support of the Center for Information and Media Technologies (IMT) of Paderborn University and the University Library of Paderborn. At KIT and Paderborn University, three doctoral students each are involved in the setup of InGriD.