Through the Monsoon: Aircraft Mission to Determine Impacts on Air Quality and Climate Change 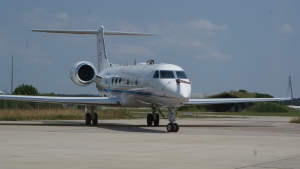 For the current campaign, the HALO research aircraft is to fly 100,000 km. Two measurement instruments of KIT are on board. (Photo: Marco Neumaier, KIT)
With the plane from Cyprus to the Maldives and back. For 65 atmosphere researchers from all over Germany, this is no vacation trip, but hard work. In a research mission with the HALO research aircraft of the German Aerospace Center, they study whether and how monsoon rains in Asia affect the self-cleaning capacity of the atmosphere. Two measurement instruments of Karlsruhe Institute of Technology (KIT) are on board of the aircraft. Among others, the concentrations of ozone and acetone are measured by KIT’s climate researchers. The campaign is coordinated by the Max Planck Institute for Chemistry, Mainz.

“The Earth’s atmosphere is capable of cleaning itself and of removing greenhouse gases or exhaust gases produced by traffic. Hydroxyl radicals, i.e. highly reactive molecules, convert these pollutants into water-soluble compounds that are then removed in the form of rain. The radicals are the ‘detergents’ of the atmosphere,” Andreas Zahn and Marco Neumaier, KIT, say. The scientists assume that drastic increase in air pollution in Asia also affects the atmosphere’s self-cleaning capacity and, hence, air quality all over the world and climate change. The monsoon is the world’s largest weather system. The gigantic air flow develops above Asia in particular and whirls pollutants up to a height of 15 km. The campaign is aimed at improving the understanding of transport processes and chemical reactions in these air masses. At the moment, twelve measurement instruments are installed on board of HALO.

For the campaign of 30 days’ duration, KIT’s climate researchers developed two very light and highly sensitive instruments. One is designed to analyze the concentration of atmospheric ozone with a temporal resolution of ten measurements per second. “The concentration of ozone is an important indicator of how reactive air is. In addition, ozone concentrations measured in the upper atmosphere yield important information on the position of the tropopause, i.e. the boundary layer between the troposphere, where weather takes place, and the above ozone-rich stratosphere,” Dr. Andreas Zahn of the KIT Institute of Meteorology and Climate Research (IMK) says. 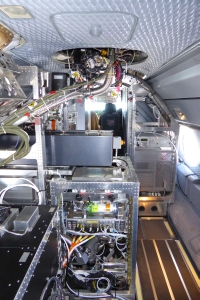 On board of HALO: In the background on the right, the rack with the measurement instruments of KIT is visible. The ozone instrument is located at the top and the mass spectrometer at the bottom. (Photo: Dr. Felix Geiger)
Moreover, a proton transfer reaction mass spectrometer developed by KIT is on board of HALO. It is a highly sensitive instrument that measures smallest traces of volatile organic compounds in real time during the flight. Concentrations are below 0.1 millionth of a gram per cubic meter air. Examples of such compounds are acetone, acetonitrile, and methanol. Recently, a study of the KIT researchers confirmed that acetone is an important source of hydroxyl radicals. “Acetone is released directly by plants in the summer and produced from anthropogenic hydrocarbons by chemical reactions in the atmosphere,” Dr. Marco Neumaier, IMK, explains. Acetonitrile trace gas is produced by the combustion of biomass, e.g. during forest fires and forest clearing. “Based on the measurement, we can precisely determine the share of air pollutants produced by combustion and draw conclusions with respect to transport paths of air masses from the ground to higher altitudes,” Neumaier says.

The OMO (acronym of Oxidation Mechanism Observations) mission was conceived by the Max Planck Institute for Chemistry together with Forschungszentrum Jülich, the German Aerospace Center, Karlsruhe Institute of Technology, and the Universities of Bremen, Heidelberg, Leipzig, and Wuppertal.

OMO started on July 21. First, measurements are made above the Arabian peninsula and the Arabian Sea. Then, the aircraft, crew, and team will head for the Maldives to analyze the atmosphere above the Indian Ocean and the Bay of Bengal. Afterwards, the researchers will spend another two weeks on Cyprus before they and their jet will return to Germany in late August. After the measurement campaign, the research aircraft of the type Gulfstream G 550 with a range of about 8,000 km and a ceiling of more than 15 km will have spent about 120 hours in the air and covered a total of 100,000 km.