Ozone and Climate: With the HALO Research Aircraft to the North Pole 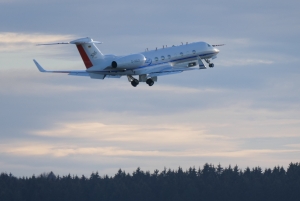 The arctic tropopause region is the focus of the measurement campaign with the German research aircraft HALO (Photo: Andreas Minikin, DLR)

Thanks to the Montreal Protocol on the Protection of the Ozone Layer, pollution of the Earth’s atmosphere by ozone-depleting substances, such as chlorine or bromine from halons and chlorofluorocarbons (CFCs), decreased over the past years. Ozone is, however, not only influenced by these substances, but acts as a greenhouse gas itself: Its impact on climate near the ground is highest in the tropopause region, the transition zone between stratosphere and troposphere at 7 to 17 kilometers altitude. The complex processes taking place there are subject of an extensive measurement campaign with the German research aircraft HALO. The campaign is coordinated by climate researchers of Karlsruhe Institute of Technology (KIT) and carried out in close collaboration with several partners.

“The tropopause region above the Arctic has hardly been studied so far with focused airborne observations. For the present measurement campaign, the HALO research aircraft has been equipped with a combination of specially developed sensors. In particular, we want to better understand the processes influencing ozone and other climate-affecting trace gases in the Arctic tropopause region in winter,” Hermann Oelhaf of the KIT Institute of Meteorology and Climate Research, says. He coordinates the campaign together with his colleague Dr. Björn-Martin Sinnhuber.

“We know that climate change due to the increase in the concentrations of CO2 and other greenhouse gases will have a strong impact on the ozone layer. But in the Arctic winter, the processes involved are complex due to the interaction of atmospheric circulation and chemistry. We do not understand some of these mechanisms sufficiently well to make reliable predictions for the future,” Björn-Martin Sinnhuber explains. While the increased concentration of greenhouse gases causes global warming on the ground, it leads to cooling in the stratosphere.

Contrary to the South Pole, where every year in the southern hemisphere spring an ozone hole develops, comparable extreme ozone depletions above the Arctic were observed in a few, very cold winters only. “It is still an open question whether climate change will indeed cause more cold winters in the Arctic stratosphere or whether changes of atmospheric circulation will rather lead to its warming,” Sinnhuber says. 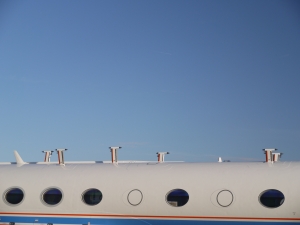 Via seven trace gas inlets atmospheric air is drawn in and directed to the onboard in-situ instruments on board. (Photo: Hermann Oelhaf, KIT)

During the campaign, the researchers will in particular focus on processes controlling ozone, water vapor, and other trace gases in the tropopause region, i.e. in the transition zone between troposphere and stratosphere at 7 to 17 kilometers altitude. At polar latitudes, it is found at 7 to 12 km altitude. “The distribution of climate-influencing trace gases in the tropopause region is controlled by transport pathways, by which air masses from the Arctic enter the mid-latitudes and vice versa, and by exchange processes between the stratosphere and troposphere,” Hermann Oelhaf explains. HALO (High Altitude and Long Range Research Aircraft) can reach altitudes of up to 15 km and has a range of more than 8,000 km, which makes it particularly suited for such studies. 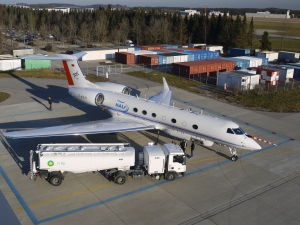 An important measurement instrument on board of HALO is the GLORIA infrared spectrometer developed and built jointly by scientists and engineers of KIT and Forschungszentrum Jülich. “With GLORIA, we can observe temperature, cloud parameters, and a number of relevant trace gases in the atmosphere,” Hermann Oelhaf says. The infrared spectrometer analyzes thermal radiation of the atmosphere and identifies trace gases based on their spectral signature, much like a fingerprint of the molecules. As thermal radiation emitted by the atmosphere itself is measured, the method also works during polar night. GLORIA combines a spectrometer with an infrared camera and, in this way, can observe two-dimensional trace gas distributions – resembling finely woven curtains along the flight path – in far more detail than before. “We obtain new insights into vertical and horizontal transport processes as well as into the interaction between high thin cirrus clouds and trace gases, such as water vapor, in the tropopause region. Both are critical parameters in the climate system,” Oelhaf explains.

About 70 scientists, engineers, technicians, pilots, and logistics specialists will be present at the “Arena Arctica” hangar in Kiruna, Sweden, near the polar circle. Partners in the project “POLSTRACC – Polar Stratosphere in a Changing Climate” alongside the Karlsruhe Institute of Technology (KIT) are the Forschungszentrum Jülich (FZJ), the German Aerospace Center (DLR), and the Universities of Heidelberg, Frankfurt, Mainz, and Wuppertal, as well as the Physikalisch-Technische Bundesanstalt. Presently, first test flights are carried out from the DLR base at Oberpfaffenhofen near Munich. Between January and March 2016, the “Arena Arctica” will be used as the base for 10 to 15 research flights across the polar sea towards Greenland and the North Pole.