From KIT’s Geophysical Institute to the ISS 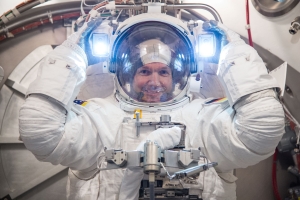 50 days left until the start: Alexander Gerst will live and work on the ISS for six months. (Photo: NASA)

He will be the eleventh German in space: On May 28, Alexander Gerst, astronaut of the European Space Agency ESA, will leave for the International Space Station ISS together with the Ameri-can Reid Wiseman and the Russian Maxim Suraev. Gerst, who is 37 years old, studied at the then University of Karlsruhe. In 2003, he was conferred his diploma by the Geophysical Institute. For a period of six months, he will work on the ISS as a technician and scientist during the expeditions 40 and 41, about 400 km above the Earth.

Alexander Gerst will be the third German astronaut living and work-ing on board of the ISS. He will conduct scientific experiments in the European Columbus Laboratory and perform maintenance and repair work as a flight engineer. The astronaut still loves to remember his studies at the Geophysical Institute of the then University of Karlsruhe: “Karlsruhe marked the start of my scientific career. There, I learned to conduct scientific work and to do research. It was a great time. I highly profited from the education in Karlsruhe and I am very grateful for it. I still very much like to remember that time.”

In his diploma thesis, Gerst studied modifications of structures below the Ruapehu volcano in New Zealand after an eruption. “Of course, I could not expect that Alexander will leave for a space mission twelve years later. But I realized that he always wanted to go a step further than it was required by the task given. He appeared to be particularly curious for things beyond his direct horizon,” says Professor Friedemann Wenzel, who supervised Gerst’s diploma thesis. “When I wrote my opinion on his excellent thesis, I thought: Such a person would have become an explorer in the 18th or 19th century and would have explored still unknown parts of the world. And this is what he actually does today.” 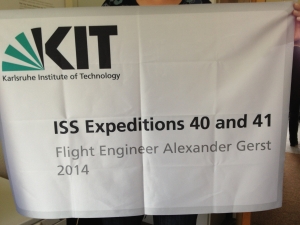 When Alexander Gerst will leave for space on board of the Soyuz spacecraft from the space mission launch center of Baikonur, he will take along a souvenir of the KIT: A silk flag of about 100 g in weight. Every astronaut can take such “flight items” along up to a certain volume and weight. Prior to the start of his mission “Blue Dot”, Gerst will now pass some training weeks at the EAC in Cologne and at a space training facility (Star City) near Moscow. The mission is named after a photo of the Earth seen from space and taken from the Voyager spacecraft right from the edge of the solar system. According to the ESA, Alexander Gerst wishes to use his mission to attract the people’s attention to the protection of our fragile home planet.

An interview of Alexander Gerst will be published in the May issue of the magazine “Helmholtz Perspektiven” of the Helmholtz Asso-ciation of National Research Centers. Cost-free subscription: http://www.helmholtz.de/perspektiven

Alexander Gerst, born in 1976, received his diploma with distinction in geophysics at the University of Karlsruhe in 2003 and was con-ferred his master in Earth Sciences by the Victoria University of Wellington, New Zealand, also with distinction. In 2010, he received his doctorate at the University of Hamburg in Geophysics and Dy-namics of Volcano Eruptions. In 2009, Gerst was selected for the astronaut corps of the European Space Agency ESA. In November 2010, he was granted the official astronaut certificate of the ESA. In August 2011, he was appointed member of the ISS crew 40/41.

Kindly note conditions of use of ESA: http://www.esa.int/spaceinimages/ESA_Multimedia/Copyright_Notice_Images