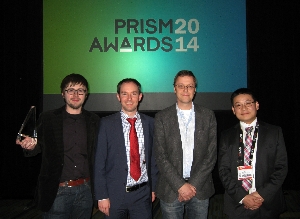 Nanoscribe GmbH, a spinoff of the Karlsruhe Institute of Tech-nology (KIT), has won the renowned Prism Award 2014. It is granted annually by the International Society for Optics and Photonics SPIE for outstanding innovations in photonics. Na-noscribe has been granted the award for a printer based on 3D laser lithography. It is used to produce minute objects within shortest periods of time. The award was handed over yesterday evening at the Photonics West, the leading photonics conference and exhibition, in San Francisco.

Nanoscribe’s laser lithography systems are used to produce three-dimensional microstructures and nanostructures. In addition, the company develops customized photoresists. Nanoscribe, the first spinoff of KIT, was established in 2008 and has meanwhile become the market leader in 3D laser lithography. Leading research institu-tions and universities in Europe, Asia, Northern America, and Aus-tralia use instruments made by Nanoscribe for their research. More-over, industry is highly interested in the innovative technology. Na-noscribe has its office at the KIT High-tech Incubator on KIT’s Cam-pus North.

Nanoscribe was granted the Prism Award 2014 in the category of “Advanced Manufacturing” for the 3D printer “Photonic Professional GT” commercialized in 2013. This printer allows to produce smallest three-dimensional objects with details in the submicrometer range at highest resolution within shortest periods of time. Production of such microstructures is required in many areas, such as optics, medical technology, fluidics, electronics, and mechanics. The 3D printing process is based on direct laser writing by two-photon polymerization. A photosensitive material is exposed to ultra-short pulses of a strongly focused laser beam. Depending on the photoresist selected, the exposed or the non-exposed volume is removed only. Following a development bath, self-supporting micro- and nanostructures remain. The so-called galvo technology is applied to deflect the position of the laser focus in the area by a galvanic mirror system. The writing speed exceeds that of conventional concepts by a factor of 100.

Every year, the Prism Award is granted to the most innovative prod-ucts and concepts launched in the area of photonics in the previous year. Each of the nine award categories in 2014 acknowledges an outstanding contribution made in the technical or industrial sector. An international jury with renowned representatives of science and industry decides on the award winners. During the awards ceremony at the Photonics West in San Francisco, Nanoscribe’s CEO Martin Hermatschweiler said: “Our customers are university research insti-tutions all over the world. We are convinced that this award reflects our technical maturity also for industrial applications and that it will sharpen the awareness of 3D printing technology being the right process for the solution of many problems.”