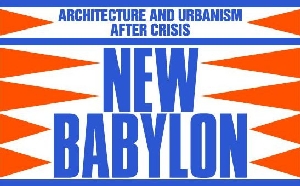 Foreclosure sales, vacant residential buildings and business premises, unfinished and abandoned constructions of buildings: The global financial and economic crisis has an increasing impact on the cities. The consequences of the crisis for urban development and architecture  as well as approaches and proposed solutions are discussed by politicians, cultural commentators, designers, architects, and city planners on the occasion of the international symposium “New Babylon – Architecture and Urbanism After Crisis“ on January 31 and February 1, 2012 at Karlsruhe Institute of Technology (KIT). Representatives of the media are welcome to attend.

International cross-linking of the capital markets causes international risks e.g. in granting loans. As a consequence, the United States housing crisis developed into a long-lasting global financial and economic crisis. “Throughout the world, high unemployment, poverty, and migration heavily influence the situation in the cities: The global financial crisis has turned into an urban crisis,” says Florian Dreher from the Division of Architectural Theory at KIT’s Department of Architecture who has planned and organized the symposium together with Kerstin Faber from the Division of Urban Development. One of the meeting’s central topics will be the interaction between the public and politics. “Throughout the world, new protest movements such as “Occupy” have formed both in urban areas and on the internet,” Faber explains and adds that “it is important to define what is meant by “public sphere” as limits tighten through privatization and no-protest zones. Besides, we need to discuss how participation in urban society may look like in the future.”

In addition, the symposium deals with economy and living, identity and culture, and infrastructure and environment. The program includes 14 papers held by experts from politics, science, and urban development from all over the world. On Thursday, January 31 at 7:00 p.m., Mayor of the City of Reykjavik Jón Gnarr talks about responsibility in politics. The subsequent lecture by Director of Architekturmuseum der TU München Professor Andres Lepik discusses the social dimension of architecture.

Last year, architect Muck Petzet designed the German pavilion for the Venice Architecture Biennale 2012. On Friday, February 1 at 03:30 p.m., he will introduce ideas on reducing, reusing, and recycling the “resource architecture”. At 05:15 p.m., Harvard professor and architect Charles Waldheim will present future urban infrastructures with a view to energy supply, water treatment, and food production. Last but not least, British engineer Andrew Comer, who developed the master plan for the Olympic Games 2012 in London, talks about “City 3.0”.

Each lecture within the four topics will end with a discussion round.

More information and full program at: