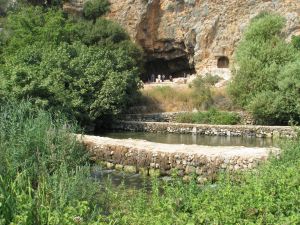 The Jordan spring is rich in water, while water is lacking in the lower Jordan valley. (Photo: Nico Goldscheider)

Water scarcity in the lower Jordan valley is extreme and political differences among the neighboring countries are high. To supply the population living in this region with sufficient clean water, Israeli, Jordanian, Palestinian, and German researchers cooperate under the direction of KIT. The SMART (Sustainable Management of Available Water Resources with Innovative Technologies) project focuses on technical solutions as well as on ecological and socioeconomic aspects.

The catchment area of the lower Jordan river between the Sea of Galilee and the Dead Sea is characterized by a very dry climate. Evaporation by far exceeds the amount of precipitation. The team of international experts of various disciplines is developing an integrated water resources management (IWRM) concept taking into account all water resources available. Apart from groundwater, these resources also include processed wastewater, desalinated brackish water, and, after strong rainfall in winter, flood water that flows via wadis into the Jordan river and then into the Dead Sea. Among the academic partners participating in the project funded by the Federal Ministry of Education and Research (BMBF) are the Ben Gurion University of the Negev, the University of Tel Aviv, the Palestinian Al-Quds University, and the Jordanian University of Amman. In addition, ministries, water supply companies, and authorities as well as local decision-makers are involved.

One of five German and three Jordanian young scientists writing their PhD theses at KIT within the framework of the SMART project is the geoecologist Moritz Zemann. His diploma thesis at the KIT Institute of Applied Geosciences already focused on the possibility of storing flood water after rare, but sometimes abundant precipitation in the geological underground. This “managed aquifer recharge” in natural reservoirs protects the water against evaporation. The scientists use their geological and hydrological knowledge to explore suitable natural reservoirs in sediments and rock and to develop technical solutions for storing water in the underground. Zemann’s PhD thesis now deals with the question of how the quality of the groundwater can be evaluated and protected. “The willingness to cooperate is high, the project contributes to reducing mutual prejudices,” he says. In total, 20 PhD students are involved in the project. Among the German partners are the University of Göttingen and the Helmholtz Centre for Environmental Research (UFZ), Halle. Apart from the acquisition of engineering competence, it is also aimed at finding out which technology is politically feasible and affordable.

The project started in 2006 and has now entered its second phase, namely, practical implementation of research findings. At KIT, several institutes and scientists are involved in SMART apart from the coordinating Chair for Hydrogeology of Professor Nico Goldscheider. The Chair for Water Chemistry of the Engler-Bunte Institute (EBI), for instance, focuses on the desalination of brackish water. “This brackish spring water or groundwater is less salty than seawater, as a result of which energy expenditure for desalination is smaller. Moreover, brackish water can also be found inland,” says Goldscheider. The processed water does not have to be transported from the coastal region, but can be made available for drinking purposes and agriculture in a decentralized manner.

Among others, the dramatic scarcity of water in the lower Jordan valley is related to the population development. “In Jordan, population has grown from about 500,000 people in 1952 to six million today. This means that ten times more people need drinking water,” explains Goldscheider. The KIT professor adds that “the SMART project so far has survived all crises, even in times of major political tensions. On both sides, there probably is a silent, peaceloving majority and obviously, many of these reasonable people are scientists and researchers.”