Kinks in the Knee 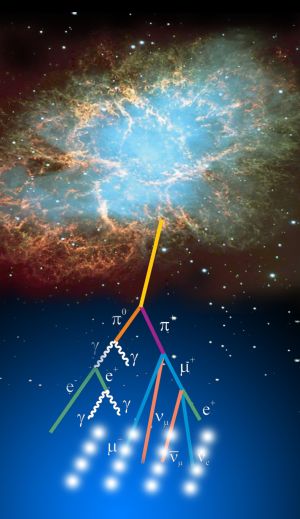 Cosmic rays, massive particles from the universe, trigger showers of particles in the Earth’s atmosphere, which are detected on the ground by the KASCADE-Grande experiment. (Graphics: Tim Otto Roth and KIT)

For many years, astroparticle physicists have been dealing with the question of what causes the “knee”, a kink in the energy spectrum of cosmic rays. For light elements, such as hydrogen, the KASCADE experiment on the premises of Karlsruhe Institute of Technology supplied important hints. By extending the experiment to KASCADE-Grande, the scientists have now measured particles of ten times higher energy and, hence, the complete knee. The knee consists of several kinks. With in-creasing energy, more and more heavier elements disappear from the spectrum of cosmic rays. The results have now been published in the journal “Physical Review Letters“.


KASCADE-Grande is a measurement field for cosmic rays on the premises of Campus North of Karlsruhe Institute of Technology. On an area of 700 x 700 m2, 37 detector stations are located. In addi-tion, the former KASCADE experiment has been integrated. “KAS-CADE-Grande extends the measurement area of the KASCADE experiment by a factor of ten,” says Dr. Andreas Haungs, who heads the KASCADE-Grande project at KIT. “ Now, we can measure particle showers generated by cosmic particles of up to 1018 electron-volts in energy.” 1018 electron volts: This energy exceeds the energies of the presently largest particle accelerators on Earth by a factor of 100. 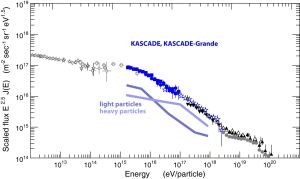 The "knee" of cosmic rays, a kink in the energy spectrum, occurs at variable ener-gies for light and heavy particles. (Graphics: KIT)

The flux of cosmic rays, i.e. of primary particles prevailing every-where in the universe, decreases strongly with increasing particle energy. A little above an energy of 1015 electron volts, the “steep-ness” of flux decrease changes: This results in a kink in the spec-trum, the “knee” of cosmic rays. It was shown by the KASCADE experiment already that cosmic rays in the energy range up to 1017 electron-volts do not consist of photons, but of massive particles, atomic nuclei. These particles come from all directions with the same abundance – radiation is isotropic. And, most important, the data suggest that the first part of this “knee” is caused by the disap-pearance of lighter primary particles and the kink is shifted towards higher energies with the mass of the primary particles. The corre-sponding measurements have now been made after the extension of the energy range by KASCADE-Grande: The kink for iron nuclei is located at about 1017 electron-volts.

“The results of KASCADE-Grande allow the conclusion to be drawn that primary particles of cosmic rays can be generated and stored in our Milky Way up to energies of around 1017 electron-volts only,” summarizes Andreas Haungs the impacts on our astronomic con-ception of the world. “Accordingly, particles of even higher energy have their origin outside of the Milky Way.” These higher-energy particles of cosmic rays are measured by the Pierre Auger Observa-tory in Argentina, in the setup and scientific evaluation of which KIT is also involved.

The KASCADE-Grande project is run by an international collabora-tion of scientists from KIT as well as from the universities of Micho-acana (Mexico), Turin (Italy), Lodz (Poland), Bucharest (Romania), Siegen and Wuppertal (Germany), Sao Paulo (Brazil), and Nijmwe-gen (the Netherlands). After five years of measurements since the extension of KASCADE and another three years of operation as a test facility for novel detectors, KASCADE-Grande will be switched off at the end of this year.

First results by analyzing the rich data set have now been published by the scientific journal “Physical Review Letters”:
"Kneelike structure in the spectrum of the heavy component of cos-mic rays observed with KASCADE-Grande", Physical Review Letters (Vol. 107, No. 17):
URL: http://link.aps.org/doi/10.1103/PhysRevLett.107.171104
DOI: 10.1103/PhysRevLett.107.171104