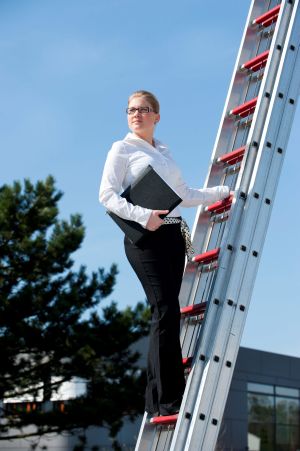 The proportion of women in supervisory boards is related with the success of certain stock companies. This is confirmed by a study of the KIT Institute of Management and the professorship for management and controlling of the Georg-August-Universität Göttingen, which was funded by the Federal Ministry of Family Affairs. A significant positive effect of women in supervisory boards is found for companies focusing on private clients and/or companies having a high share of women among their employees.

In their study “Frauen in Führungspositionen – Auswirkungen auf den Unternehmenserfolg” (women in executive positions – effects on the company’s success), Professor Hagen Lindstädt, holder of the Chair for Management at KIT, his staff member Dr. Kerstin
Fehre, and Professor Michael Wolff from the University of Göttingen analyzed the relationship between the share of women in supervisory boards of 160 joint stock companies in Germany and their financial performance. The study is based on data of the DAX family (DAX, MDAX, SDAX, TecDAX) from the years 2002 to 2010. The result: No statistically significant evidence can be found of the fact that women in German supervisory boards have a generally positive effect on the company performance. However, such evidence can be found for all companies of a certain type: They sell their products and services mainly to private clients (B2C business) and/or the share of women in the staff is high.

Dr. Kerstin Fehre explains that companies focusing on business with private customers succeed best in communicating with a diverse customer segment, i.e. men and women, when both genders are represented in the management team. Professor Hagen Lindstädt argues for diversity on the management level: “The more diverse a management body is, the better are the decisions made. The mix is important.”


A High Proportion of Women Attracts Motivated Female Employees
If companies have a high share of women in their staff, a strong female representation in the supervisory board has positive effects on attractiveness as employer. Such companies in particular attract motivated, performance- and career-oriented female employees. “Parallel to the demographic development in Germany and the implications for the lack of experts and executives, this aspect will even gain importance in the future,” says Fehre.

Women in Executive Positions Combine Job and Family
Investigation of the personal data of female executives revealed that 70% of the women in German supervisory boards are married, 60% have at least one child. In the executive boards, even 91% are married and 70% have one or several children. Consequently, the conception of women in executive positions without children, which is still omnipresent in the public, is not true.

The positive effects described can be noticed both for the presence and the share of women in supervisory boards. They apply to both internal (return on assets and return on equity) and external characteristics (market/book value). However, the study performed on behalf of the Federal Ministry of Family Affairs, Senior Citizens, Women, and Youth also reveals that the status quo of women in executive boards and supervisory boards has not yet improved considerably. The proportion of female supervisory board members in the prime standard of German stock exchange increased from 8.8% in 2009 to 9.1% in 2010. The share of enterprises with female supervisory board members increased from 35.4% in 2009 to 35.9% in 2010. Only 7.6% of the companies have female members in their executive boards. In late 2010, just 2.8% of thee executive positions were occupied by women. In 2009, this proportion amounted to 2.5%.

The authors of the study consider appropriate incentives for a sustainable increase in the proportion of women in executive positions reasonable. They argue that legal regulations should consider specific features and differences of the companies.