Invitation of the Media to Live Viewing at KIT 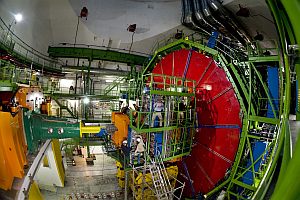 KIT researchers participate in the experiments at the giant CMS detector of the LHC at CERN, Geneva. (Photo: CERN)

On March 30, 2010, the Large Hadron Collider (LHC) at CERN, Geneva, will start its regular operation with proton-proton collisions at an energy of 7000 giga electron volts, the highest energies ever generated by particle accelerators. Parallel to an event at CERN in Geneva, KIT will duly celebrate this milestone. From 9.00 hrs, the events at CERN will be transmitted live to the lecture hall of the Institut für Experimentelle Kernphysik on KIT Campus North. Representatives of the media are cordially invited to talk with the scientists involved.

After a successful restart in late 2009 and the first tests this year, the Large Hadron Collider (LHC) in Geneva will now start an operation phase of two years until 2012. Then, the facility will be reconditioned before operation will be continued at even higher energies. At KIT, the Institut für Experimentelle Kernphysik (EKP) and the Steinbuch Centre for Computing (SCC) with its GridKa Computing Center will participate in this scientifically unique project.

EKP conducts research at one of the gigantic detectors of the LHC, called CMS (Compact Muon Solenoid). CMS records the particle trajectories generated by the proton-proton collisions. Under the direction of Professor Thomas Müller, the EKP was also involved in the construction of the central, silicon-based detector for charged particle tracks, and it constitutes the largest German research group with a total of about 50 scientists, of which ten are delegated directly to CERN. In the past years, the analysis and interpretation of the LHC data were prepared carefully by the working groups of EKP and the Institutes for Theoretical Particle Physics of KIT. The scientists expect the LHC experiments to provide answers to fundamental questions in the fields of particle physics and cosmology, amongst them about the origin of mass or the nature of dark matter in the Universe.

GridKa is one of the largest of eleven worldwide operating so-called tier-1 grid computing centers assigned to the LHC project. With more than 1800 computers, GridKa will store and process about 14 % of all LHC data. The data are distributed further to more than 15 tier-2 centers in five European countries, where they are analyzed by particle physicists. The amount of data that is handled annually by GridKa would correspond to a stack of DVDs of 13 km height.

The first proton-proton collisions at the highest energy ever reached in a laboratory on Earth are awaited eagerly by the KIT staff at the CMS control center on Campus North. On March 30, 2010, from 9.00 hrs on, representatives of the media can watch the startup of the LHC live at the lecture hall of the Institute of Experimental Nuclear Physics, building 401, 3rd floor, on KIT Campus North. Parallel to this live transmission and video conferences with Geneva, scientists of KIT will be pleased to answer questions relating to the experiments at the LHC.