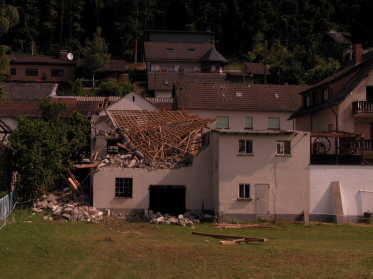 Being on the trail of the consequences of climate change: KIT scientists
determine the risks of storm damage. (Photo by: Universität Karlsruhe)

Will climate change be accelerated? Do new model simulations with supercomputers confirm global trends? These and other questions have been studied extensively by scientists of the Karlsruhe Institute of Technology (KIT) and other research institutions since two years under the program “Challenge – Climate Change”. On Monday, September 29, 2008, 9.30 hrs, they will draw an interim balance in the presence of the State Minister of the Environment, Mrs. Tanja Gönner. The meeting will take place at the Lehmann-Hörsaal of the Universität Karlsruhe (Engesserstraße 7, building No. 30.22).

The program is funded by the state of Baden-Württemberg from funds of the Initiative for the Future and coordinated by the State Office for the Environment, Measurements, and Nature Protection. The KIT contributed extensive simulation calculations of the regional climate on supercomputers at Stuttgart (HLRS) and Karlsruhe (SCC). For the first time, scientists around Professor Christoph Kottmeier and Dr. Gerd Schädler have used several scenarios of global climate models as input data for their detailed calculations for the state of Baden-Württemberg. “With a mesh width of seven kilometers only and repeated simulations using a variety of model variants, we enter new ground”, underlines Schädler. This applies to both the computing capacity required and the closeness to reality of the models. “For the first time, we now see all details known from daily weather sequences: Orographic rainfall and summit regions exposed to roaring storms in the Black Forest, windless and dry areas at lower elevations and in the east of the state.” The rather comprehensive and detailed results represent an excellent database for the planning of actions.

Not only the heads of the research programs are highly confident in view of the results obtained. “With this program, we significantly extend our knowledge on climate change and its consequences in our state”, says the Minister of the Environment, Mrs. Tanja Gönner. “Such scopes and details of regional climate simulations are unique in Germany. But they are required to realistically estimate the consequences in many areas of our society.”

For this purpose, scientists from the universities of Freiburg and Karlsruhe are investigating the storm damage risk of forests. It was found by Dr. Michael Kunz from the KIT Institute of Meteorology and Climate Research that the number of storms having the intensity of “Lothar” in 1999 or “Kyrill” in 2007 will hardly decrease in the future. Factors influencing the storm stability of forests were quantified by Professor Bodo Ruck from the KIT Institute of Hydromechanics, who carried out experiments in the boundary layer wind tunnel and made numerical simulation calculations.

The group of researchers now wants to compile all results and suggest potential measures to reduce the risks of storms for the forests in the state of Baden-Württemberg.