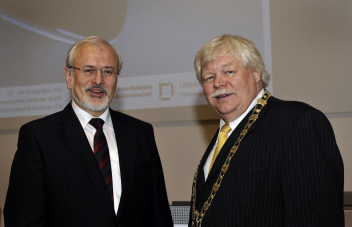 At the first joint annual academic celebration of the Karlsruhe Institute of Technology (KIT), the President of the Universität Karlsruhe, Horst Hippler, pleaded for a further strengthening of entrepreneurial aspects of universities and the KIT in the presence of about 700 guests. Eberhard Umbach, Chairman of the Executive Board of Forschungszentrum Karlsruhe, underlined the significance of international competition in research.

Hippler pointed out that KIT has to further enhance the performance-oriented environment, promote competition in science, and open up new approaches to funding, with both industry and society assuming their shares. He emphasized that the KIT creates an environment that motivates the staff and actively supports women. “The new KIT research structures, exchange beyond borders of disciplines, and funding of joint projects result in a creative environment that can be designed by each individual scientist”, underlined Hippler. According to him, the large number of PhD students and post-docs reflects the performance-enhancing atmosphere of KIT. In the academic year of 2007/2008, 344 scientists, of these, 81 female scientists, far more than in the past year, were conferred their PhD. For the first time, more women than men were awarded their PhD at the Faculty of Chemical Engineering and Process Technology this year.

At the joint annual academic celebration of KIT, Hippler emphasized the role of internal competition. “We do not favour domestic socialism”, underlined Hippler. He pointed out that it is important to identify and promote outstanding projects in all disciplines, not only in research, but also in education. According to Hippler, three applications for a place at KIT demonstrate that the latter is rather popular among students. A major incentive for highest performance in education are the faculties’ teaching awards that were handed over by Hippler for the second time. Per faculty, these awards have a value of EUR 10,000.

As far as funding is concerned, Hippler called upon society and industry: “German industry has to learn to invest in institutions in the long term, rather than in short-term results!”, said Hippler, who had the USA in his mind, where the enterprises are usually paying not only research work of a scientist, but also overhead expenses.

Hippler also appealed to the city of Karlsruhe. “Apart from trade and services, high technology in the region will profit massively from KIT”, said Hippler, who expects 1400 new jobs and 2000 new students at KIT in the next five to ten years. He pointed out that an extension of the campus is urgently required, as spare areas are no longer available. “The limited space of the university must not inhibit the development of KIT!” underlined Hippler. He referred to the coherent campuses of American elite institutions and the necessity for KIT students to rapidly change halls between lectures.

Hippler thanked all sponsors of the university and in particular Josefine and Hans-Werner Hector, who established a foundation of EUR 200 million for the Universität Karlsruhe.

In his speech, the Chairman of the Executive Board of the Forschungszentrum Karlsruhe, Professor Eberhard Umbach, underlined the role of international competition for research at KIT. In his opinion, the two KIT visions of assuming a leading role in nanosciences worldwide and being the leading European energy research center are directly aimed at competition. “This competition is of enormously stimulating and promoting character”, emphasized the Chairman of the Executive Board. However, Umbach also criticized the current situation. According to him, marketing of research results is overestimated and often done in such an experienced manner that even expert scientists are deceived with respect to the true value of the results. “False work – in particular when it is published in Science or Nature – is cited preferably”, said Umbach.

According to Eberhard Umbach, an increasing number of cooperative ventures is another facet of international competition. While formal cooperation agreements of research institutions were rather rare in the past, a cooperation epidemic has broken out in the meantime also on the international level, said Umbach. He pointed out that the KIT recently was a frequently sought-after cooperation partner. Several contacts in different countries are currently being reviewed. Close cooperation with the CEA (Commissariat à l’Energie Atomique), the largest French research organization, with meanwhile 30 cooperation agreements is expected to bring about strategic advantages in inner-European competition, for instance in energy research. But Umbach also pointed out that parallel to an increased cooperation, competition of the institutions has increased as well. “The Excellence Initiative has given many incentives, but it has also given rise to sensitivities and jealousy among universities”, concluded the Chairman of the Executive Board.

According to Umbach, another major aspect in international competition is the fight for the best experts. “Meanwhile, the number of students has become an indicator of success”, said Umbach. He pointed out that in contrast to the USA or Australia, it is not so much focused on sources of income in Germany, but rather on long-term bonds that will turn into scientific, economic or political connections later on. At the same time, Umbach underlined that Germany will have to become more attractive for foreign students and scientists. “The best experts worldwide are still going to the USA or to Great Britain.” Umbach thinks that apart from the language and boundary conditions, the reason lies in the salaries: “It does not make sense that we are supposed to compete with Anglo-Saxon top universities or with the ETH Zurich, while we are only in a position to pay salaries that are far behind those of competing universities”, explained Eberhard Umbach and urgently pleaded for more entrepreneurial freedom.

On behalf of the diseased lord mayor of Karlsruhe, mayor Harald Denecken emphasized that the KIT has adopted new scientific approaches and is setting trends. According to him, the city pursues the development of KIT with excitement. “We will find a good solution for the campus”, promised Denecken.

The annual academic celebration always includes the conferral of awards. The long-time chairman of the staff council of the Universität, Joachim Krahl, was awarded the medal of merit by the President. Until his retirement, Krahl had advocated the needs of the staff for a period of 22 years.

Apart from the PhD awards of the Forschungszentrum, the Otto Haxel Award of the Friends of the Forschungszentrum Karlsruhe in the amount of EUR 6000 was conferred. It is granted for scientific and technical achievements that result in effective innovations and, hence, major incentives for industry. This year, the award was given to the enterprise of Nanoscribe, a spin-off of the Institute of Nanotechnology. The laureates were Dr. Georg von Freymann, Martin Hermatschweiler, Michael Thiel, and Professor Martin Wegener. Nanoscribe develops and sells laser lithography systems, by means of which three-dimensional structures can be produced on the nano- and micrometer scale.

The presentation by Professor Volker Schulze, who is teaching at the Institute for Materials Research I and the Institute for Production Technology, focused on the scientific and technical challenges in the further development of clarinets. He even made the effects on the sound “audible” by playing the clarinet himself.