Beacons of Their Disciplines 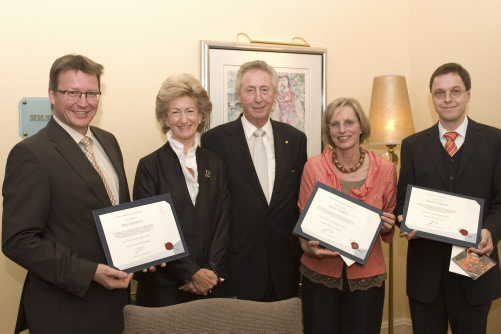 With this, the Hector Foundation II appreciates the commitment and outstanding achievements of the three professors in science, research, and education. “They have been elected the best of extraordinary university teachers”, underlined Hans-Werner Hector during the ceremony at Villa Hammerschmiede in Pfinztal-Söllingen. “They are beacons of their disciplines. I am deeply impressed of their research work.”

It is the first time that the board of trustees of the Hector Foundation II founded in March 2008 has appointed Hector fellows. Among them, the fellows then elect a chairman and a deputy for a certain period of time. The fellows, who will be appointed once per year, shall establish a network or round table of top scientists to support and motivate each other in their work and research. Another objective is the exchange of experience. Hans-Werner Hector refers to this group of Hector fellows as a “democratically oriented Mount Olympus of modern scientists”.

Hector criticizes that a surprising skepticism about science and in particular natural science prevails in Germany, contrary to America. “In the land of poets and thinkers, natural science is living a deplorable existence.” According to Hector, this is a dangerous development. “Because misunderstanding results in rejection”, underlines Hector. It is therefore the task of the three new Hector fellows to make natural science understandable to the public and to convey it in an appropriate way. Professor Horst Hippler, President of Universität Karlsruhe, is pleased: “The appointment of the first Hector fellows is a great honor for our university”, says Hippler. “I am very pleased that the fellowship will result in networks and support research projects of excellent and well-established university teachers.”

From the Hector Science Fund that was established in March past year, a total of five million Euros are available to the university every year in order to finance scientific equipment and salaries of excellently qualified and active university teachers. According to Hippler, first success is already visible. “We are conducting negotiations with the professor of physics Gerd Ulrich Nienhaus from the university of Ulm, whom we would like to have in Karlsruhe. In addition, Professor Mehdi Baradaran Tahoori, renowned scientist in the field of nanobiology, will move from Boston to Karlsruhe”, says Hippler. “Without the Hector Foundation II, we would not have been able to make these two professors a competitive offer.”

Doris Wedlich came to Universität Karlsruhe in 2001 and works in the field of cellular biology and nanobiology. Her work on how the fixation and detachment of cells in tissue is controlled by molecular processes (for instance, in cancer formation and spreading) has met with international attention. She was awarded the state research award and appointed Vice President for Research of Universität Karlsruhe from 2002 to 2005. Today, she is member of numerous scientific bodies, such as the DFG Senate Committee for Collaborative Research Centers, the board of trustees of the Geoforschungszentrum Potsdam, and the German Society for Cellular Biology.

Martin Wegener is one of the leading representatives of nanosciences worldwide. His research focuses on nanophotonics and the fabrication of artificial materials for optical data processing and telecommunication. Wegener was granted numerous research and teaching awards, including the state teaching award, the state research award Baden-Württemberg as well as the René Descartes Award of the EU for cooperative research to develop artificial structures with entirely novel optical properties. In 2000, Wegener was awarded the lucrative Gottfried Wilhelm Leibniz Award of the DFG.

Peter Gumbsch has been conducting research and teaching in the area between physics and engineering sciences since 2001 in Karlsruhe. He focuses on materials mechanics. In particular, he studies the dynamics of deformation processes and irregularities in the lattice structure of solid materials. Gumbsch investigated new aspects of the breaking of atomic bonds and was awarded the Gottfried Wilhelm Leibniz Award in 2007. Apart from his professorship at Universität Karlsruhe, he is heading the Fraunhofer Institute for Materials Mechanics in Freiburg and Halle.