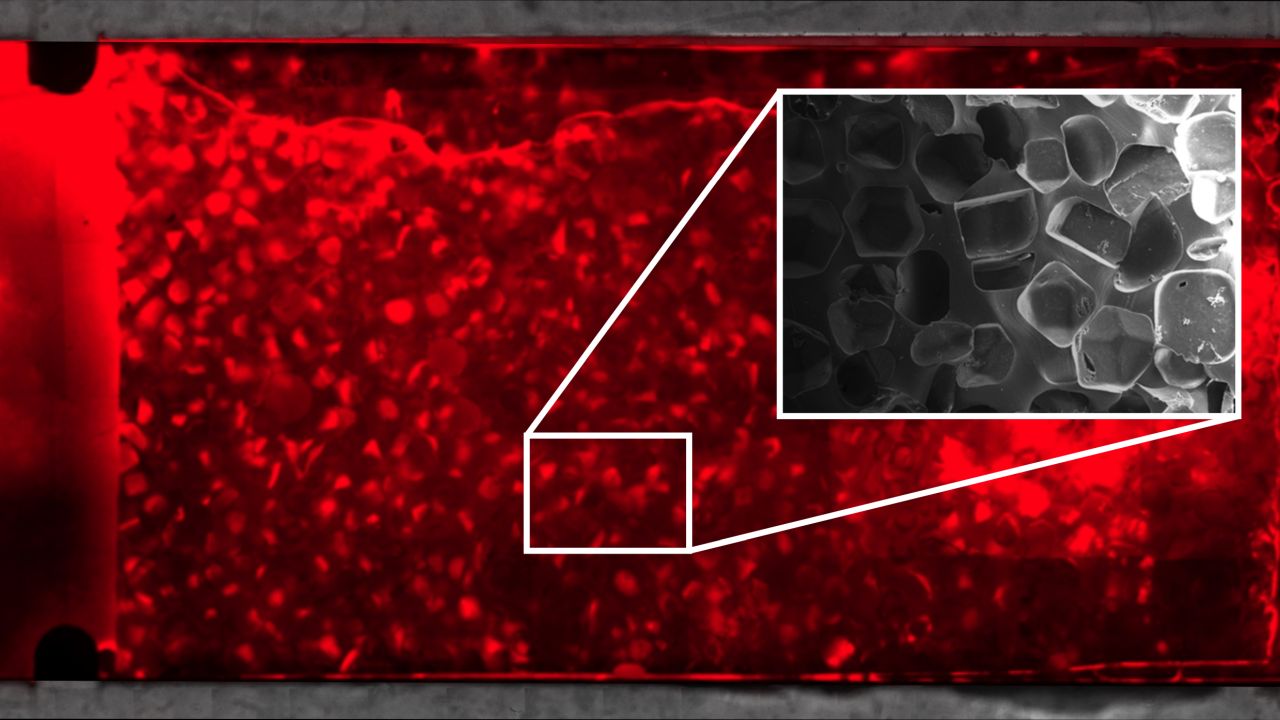 The sponge-like structure of the chip (in gray) was produced with salt crystals. In the lab, it is colonized by the red microorganisms within a few days. (Photo: Institute for Biological Interfaces-1, KIT)

From human intestines to the bottom of the sea: Microorganisms populate nearly any habitat, no matter how hostile it is. Their great variety of survival strategies is of huge potential in biotechnology. Most of these organisms, however, are unknown, because they cannot be cultivated. To make better use of this “microbial dark matter”, a team of researchers from Karlsruhe Institute of Technology (KIT) has now developed a “sponge” made of porous, formable silicone. Embedded in a chip, the material sucks up microorganisms in the surroundings, which can then be applied for further research. The findings are published in ACS – Applied Material and Interfaces.

“It is quite surprising that nobody ever thought of using medical silicone for the settlement of bacteria,” says Christof Niemeyer, Professor for Chemical Biology at KIT’s Institute for Biological Interfaces-1. Advantages are obvious, he points out. The special polymer used for e.g. breast implants does not interact with its environment. It can be modified easily, is long-lived and inexpensive. Niemeyer and his team came across it by chance. The results surpassed their expectations, the chemist says. “The material can take up microorganisms from the environment, no matter how moist or dry it is. For this purpose, the silicone had to be processed to a porous, sponge-like structure,” he explains.

Experiments revealed that this silicone sponge captures a very large range of microorganisms in its holes. In the dry air of a poultry farm, the team identified Actinobacteriota species. These microorganisms are needed for the production of antibiotics. Moreover, they can be applied to produce substances to treat certain cancer diseases. “With the sponge, we can catch new bacteria that might benefit biomedicine,” Niemeyer thinks.

Something similar happened when the silicone sponge was immersed into a pool to cultivate pikeperch. Researchers found many bacteria belonging to the Candidate phyla radiation group, far more than in conventional, commercially available material. “These microorganisms account for about 70 percent of the microbial dark matter, as they have not been cultivable so far,” Professor Anne-Kristin Kaster explains. With her team at the KIT Institute for Biological Interfaces-5, she analyzed the captured microorganisms using latest sequencing technology.

The team also proved that the sponge can enrich selected bacteria, if it is prepared accordingly. For instance, microorganisms processing glyphosate were “lured” into the sponge using this pesticide. And in contact with soil samples, the porous material was colonized by microbes within a few days.

To make medical silicone habitable for microorganisms, the researchers had to process the material in a new way. The team added table salt to the polymer, which was dissolved again afterwards. As a result, small holes connected by small passageways developed. The desired sponge-like structure was obtained. For applications, the researchers then formed a “chip.” This small unit consists of the same silicone as the sponge, but in its homogeneous rather than porous form.

“The silicone chip, that is the combination of sponge and chip, can be produced easily with standard methods in nearly any size and number,” Niemeyer says. “The robust research tool obtained can be used in nearly any environment. There is every indication that this chip is highly suited for the systematic investigation of microbial dark matter. It opens up interesting options for the cultivation of microorganisms that could not be cultivated so far.”

The main authors have filed a patent application for the silicone chip.