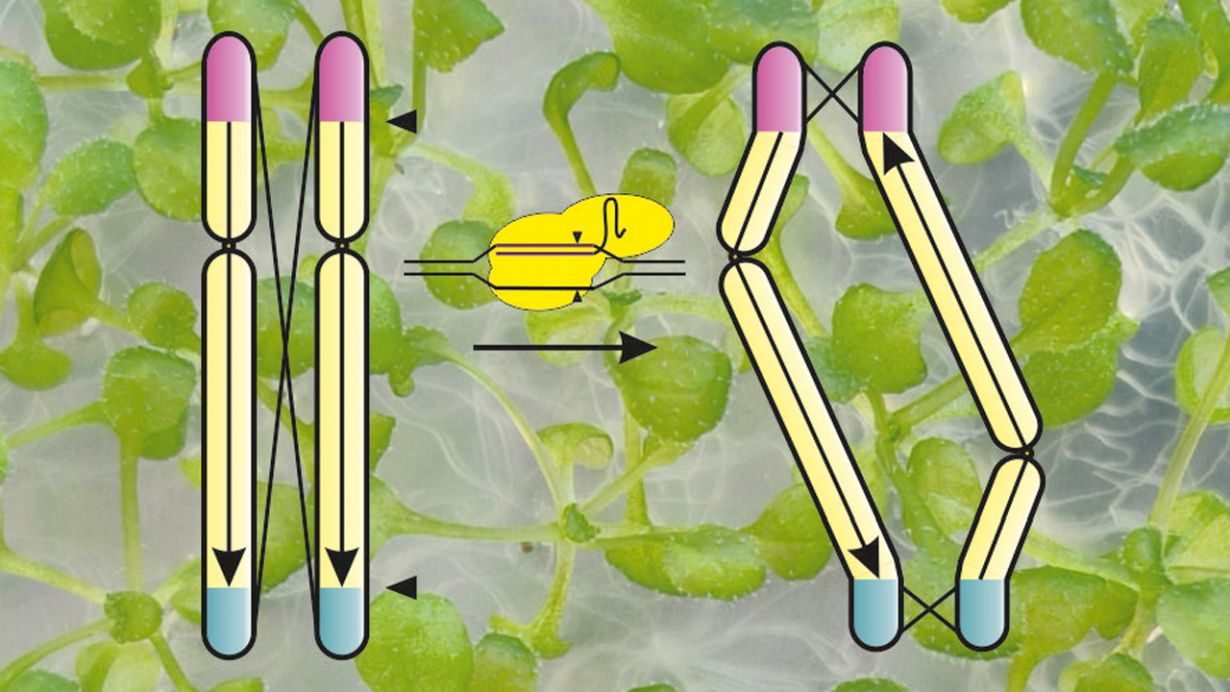 The ideal crop plant is tasty and high-yielding while also being resistant to diseases and pests. But if the relevant genes are far apart on a chromosome, some of these positive traits can be lost during breeding. To ensure that positive traits can be passed on together, researchers at Karlsruhe Institute of Technology (KIT) have used CRISPR/Cas molecular scissors to invert and thus genetically deactivate nine-tenths of a chromosome. The traits coded for on this part of the chromosome become “invisible” for genetic exchange and can thus be passed on unchanged. The researchers have reported on their findings in Nature Plants (DOI: 10.1038/s41477-022-01238-3).

Targeted editing, insertion or suppression of genes in plants is possible with CRISPR/Cas molecular scissors. (CRISPR stands for Clustered Regularly Interspaced Short Palindromic Repeats.) This method can be used to make plants more resistant to pests, diseases or environmental influences. “In recent years, we were able for the first time to use CRISPR/Cas not only to edit genes but also to change the structure of chromosomes,” says Professor Holger Puchta, who for 30 years has been researching applications for gene scissors with his team at KIT’s Botanical Institute. “Genes are linearly arranged along chromosomes. By changing their sequence, we were able to show how desired traits in plants can be separated from undesired ones.”

Now the researchers have been able to prevent the genetic exchange that is normally part of the hereditary process but can break the links between traits. “We can shut down a chromosome almost completely, making it seem invisible, so that all traits on that chromosome can be passed on in a package,” says Puchta. Until now, if a plant’s traits were to be passed on together, the genes for those traits needed to be close to each other on the same chromosome. If such genes are spread farther apart on a chromosome, they are usually separated during inheritance, so a beneficial trait can be lost during the breeding process.

In their research, the scientists followed nature’s example. “These reversals, or inversions – a kind of genetic invisibility – also occur frequently on a smaller scale in wild and cultivated plants. We’ve learned from nature and have applied and extended our knowledge about the natural process,” says Puchta.

In collaboration with Professor Andreas Houben from the Leibniz Institute of Plant Genetics and Crop Plant Research (IPK), Puchta and his team inverted nine-tenths of a chromosome in the model organism Arabidopsis thaliana (thale cress). Only at the ends of the chromosome did the genes retain their original sequence. “With these fragments, the chromosome can be passed on to the next generation just like the other chromosomes and is not completely lost,” says Puchta.

To breed crops efficiently, it is important to combine as many favorable traits as possible in one plant. “Of course plant breeders want their products to taste good, have as many vitamins as possible and also be resistant to disease. With our method, we can make that easier in the future,” says Puchta.

Detailed caption:
Genetic exchange of paternal and maternal characteristics normally occurs along the entire length of a chromosome. Through inversion of most of the chromosome (yellow) with CRISPR/Cas molecular scissors, this exchange can now be limited to the extreme ends (violet and blue). (Illustration: Michelle Rönspies, KIT)