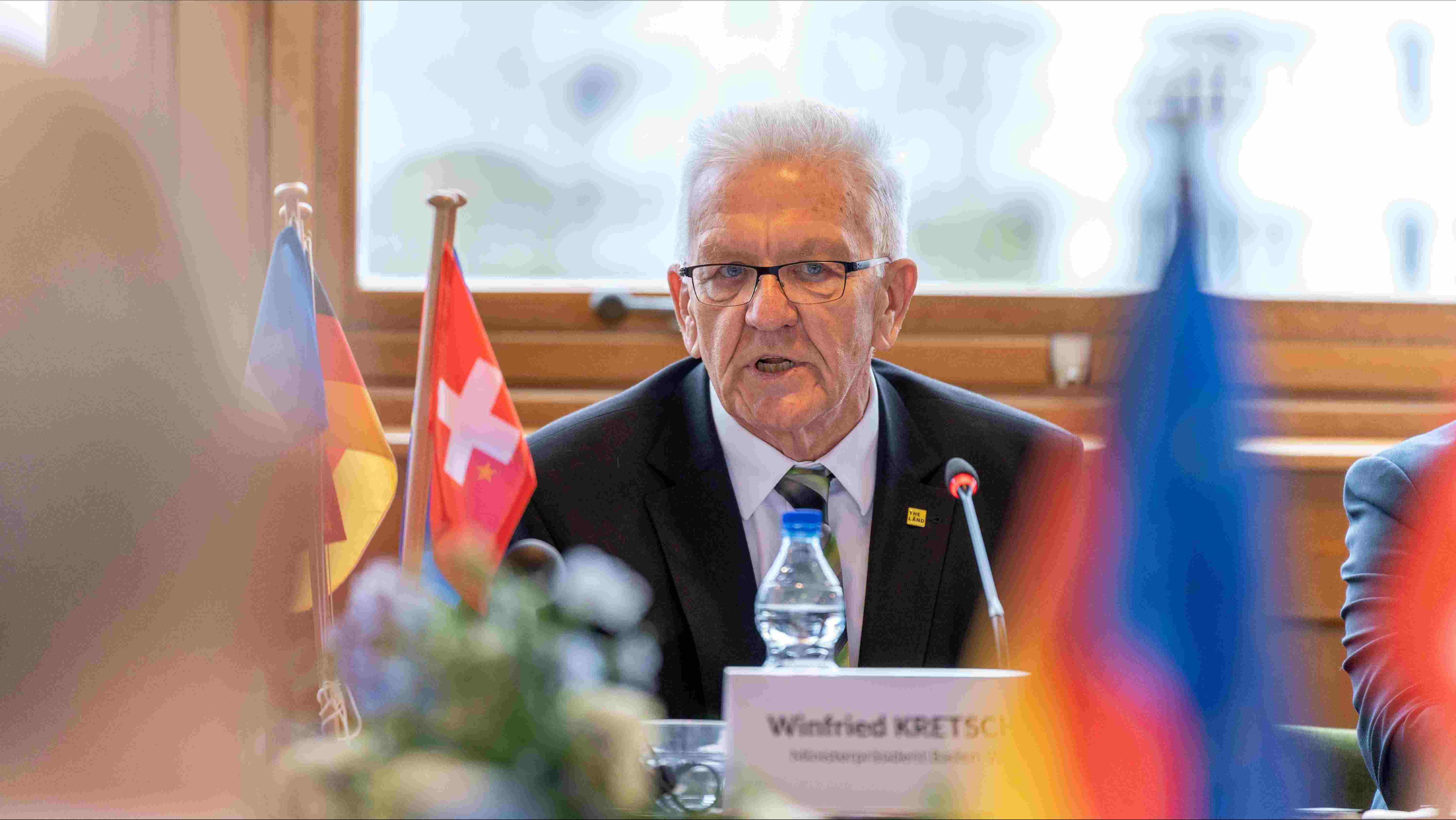 Studying, researching, and teaching across borders is the vision of the university network Eucor – The European Campus. During a two-day trip to the Strasbourg-Kehl border region, Baden-Württemberg’s Minister-President Kretschmann and other members of the cabinet and parliament visited the university network Eucor – The European Campus at the University of Strasbourg yesterday. In addition to the five rectors and presidents of the Eucor universities, high-ranking French representatives of the Région Grand Est, Eurométropole, and the Académie de Strasbourg took part in the political exchange on the further development of Eucor.

With Four Cross-border Professorships, Eucor – The European Campus Succeeds in Launching a Pioneering Project in the European Framework

“The university network Eucor connects five excellent universities from three countries. Together, we are researching issues of importance to the future in the Upper Rhine region: Personalized medicine, quantum technology, sustainability, and European identities. These are topics that are so essential that we can only find the best solutions together,” says Minister-President Winfried Kretschmann. “With Eucor, we can also secure our leading position in the European research and education area. And strengthen the innovative power, competitiveness, and prosperity here in the border region. In this way, Eucor is European integration in action. For a Europe that is not only a scientific and economic area, but, above all, a community of values. Based on freedom, democracy, and the rule of law. And a historically unique peace project. This is something that is more important than ever these days.”

“In times in which Europe is again experiencing the evils of war at its borders, the exchange between the managements of the Eucor member universities and the political representatives of the Région Grand Est and the State of Baden-Württemberg provided the opportunity to speak about the central role of academic education and research for the economic and social development of our regions.

Digital technologies, the environment, health, and Europe are big success factors for the transformation of our society and our economy. The very concrete measures presented by Eucor, including the establishment of a cross-border professorship of the University of Strasbourg and Karlsruhe Institute of Technology, prove that our universities are able to provide answers and solutions for the big challenges of our time.

After 30 years of successful cooperation in higher education policy, I am convinced that Eucor has succeeded in demonstrating the concrete added value of cooperation among universities for the border region in a European context. The Upper Rhine region is an area in which identities, cultures, economies, and mobility are crossing borders.

The visit provided the opportunity to speak about what we have in common with the State of Baden-Württemberg and in particular about trend-setting issues relating to water and the future of industry against the backdrop of climate change, the energy transition, and digital transformation,” says Jean Rottner, President of the Grand Est Region.

“Support of our trinational network by the State of Baden-Württemberg is of enormous importance. My special thanks go to Minister-President Kretschmann, who, after the breakdown of the negotiations on the EU-Switzerland Framework Agreement, continues to work personally to ensure that relations do not erode and that Bern and Brussels will hopefully reach an agreement after all, also in the interest of science. Many thanks and merci!,” says Professor Dr. Andrea Schenker-Wicki, Eucor President and Rector of the University of Basel.

Establishment of the cross-border professorships would not have been possible without the support from the State of Baden-Württemberg. Thanks to financial support by the Ministry of Science, Research, and the Arts (MWK), the two Baden-Württemberg universities in Freiburg and Karlsruhe were able to launch two binational professorships each in cooperation with the French and Swiss partner universities.

“Three years ago, we adopted a joint strategic plan for the years from 2019 to 2023, in which we defined our key thematic areas. Today, we are proud of having succeeded in creating a vibrant cross-border teaching and science hub on the Upper Rhine with the international doctoral college QUSTEC in quantum sciences and technology and the new cross-border professorship in quantum computing,” says Professor Dr.-Ing. Holger Hanselka, President of Karlsruhe Institute of Technology.

The European Grouping of Territorial Cooperation (EGTC) Eucor – The European Campus is the result of long cooperation among the universities on the Upper Rhine. In December 2015, the five member universities – University of Basel, University of Freiburg, Université de Haute-Alsace, Karlsruhe Institute of Technology (KIT), and Université de Strasbourg – signed the founding documents for acting together via a dedicated legal entity.

This was the first EGTC of universities on the European level. The main focus areas in research of Eucor – The European Campus are quantum sciences and technology, personalized health – precision medicine, sustainability, and European identities.

The EGTC pools the competencies and potentials of 15,500 scientists, 13,000 doctoral researchers, and more than 130,000 students. Eucor – The European Campus aims to establish a clearly structured science and research area of international outreach without walls and borders.

Some of the Members of the Delegation from the Baden-Württemberg Government:

Some Representatives of the French Regional Authorities:

Jeanne Barseghian, 1st Vice-President of Eurométropole and Mayor of the City of Strasbourg

Present Rectors and Presidents of the Eucor Universities:

Prof. Dr. Andrea Schenker-Wicki (Eucor President and Rector of the University of Basel)

Prof. Dr. Kerstin Krieglstein ((Rector of the University of Freiburg)

Prof. Dr. Michel Deneken (President of the University of Strasbourg)