Neutrinos Are Lighter than 0.8 Electron Volts 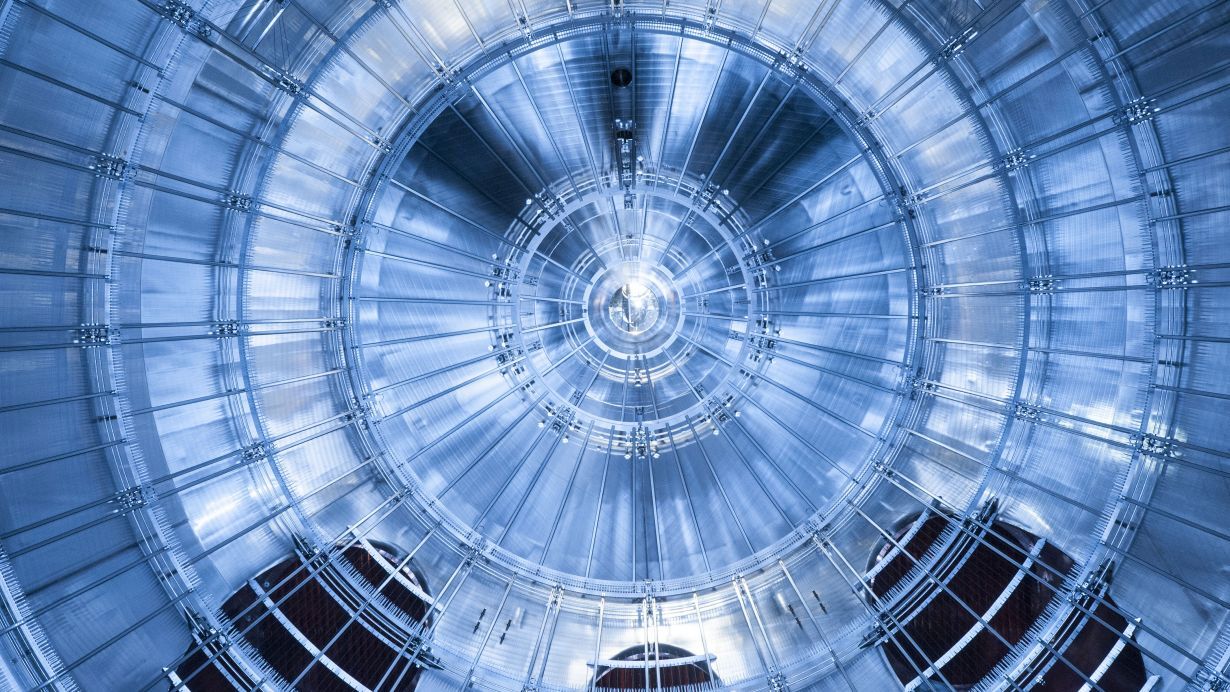 View into the main spectrometer of the KATRIN experiment to determine the mass of the neutrino on Campus North of KIT. (Photo: Markus Breig, KIT)

The international KArlsruhe TRItium Neutrino Experiment (KATRIN) located at Karlsruhe Institute of Technology (KIT) has now been the first to constrain the mass of neutrinos to less 1 electron volt (eV) and, hence, has broken an important “barrier“ in neutrino physics. From the data published in Nature Physics, a new upper limit of 0.8 eV has been derived for the mass of the neutrino. These results obtained by means of a model-independent laboratory method allows KATRIN to constrain the mass of these "lightweights of the universe" with unprecedented precision. (DOI: 10.1038/s41567-021-01463-1)

Neutrinos are arguably the most fascinating elementary particles in our universe. In cosmology they play an important role in the formation of large-scale structures, while in particle physics their very small mass sets them apart, pointing to new physics phenomena beyond our current theories. Without a measurement of the mass of neutrinos, our understanding of the universe will remain incomplete.

This is the challenge taken by the international KATRIN experiment at KIT as the world´s most sensitive scale for neutrinos. Partners from six countries are involved. KATRIN uses the beta decay of tritium, an unstable hydrogen isotope, to determine the mass of the neutrino via the energy distribution of electrons released in the decay process. This requires a major technological effort: The 70 m long experiment houses the world´s most intense tritium source as well as a giant spectrometer to measure the energies of decay electrons with unprecedented precision. After starting scientific measurements in 2019, the high quality of the data has been continuously improved over the last two years. "KATRIN as an experiment with the highest technological requirements is now running like a perfect clockwork," says Professor Guido Drexlin from KIT, the project leader and one of the two co-spokespersons of the experiment. Professor Christian Weinheimer, University of Münster, the other co-spokesperson, adds: “Reduction of the background rate and increase in the signal rate were decisive for the new result."

Detailed Data Analysis: First Push into the Range below 1 eV

In-depth analysis of these data represented a big challenge for the international team led by the two coordinators Dr. Magnus Schlösser, KIT, and Professor Susanne Mertens, Max Planck Institute for Physics and Technical University of Munich: Each and every effect on the neutrino mass, no matter how small, had to be investigated in detail. “This laborious and intricate work was the only way to exclude a systematic bias of our result due to distorting processes. We are particularly proud of our analysis team that accepted this huge challenge with great commitment and was successful, “ Schlösser and Mertens say. The experimental data from the first year of measurements and modeling based on a vanishingly small neutrino mass matched perfectly: It allowed them to determine a new upper limit of 0.8 eV for the neutrino mass, the scientists point out. This is the first time that a direct neutrino mass experiment has entered the sub-eV mass range that is of high relevance to cosmology and particle physics, as it is here where the fundamental mass scale of neutrinos is assumed to lie. "The particle physics community is excited that the 1-eV barrier has been broken by KATRIN," comments neutrino expert John Wilkerson, University of North Carolina, who chairs the KATRIN Executive Board.

"The success was based decisively on the fact that the ramp-up of the source to nominal source intensities at the Karlsruhe Tritium Laboratory and the operation of the spectrometer, detector, and cryoinfrastructure went smoothly. This was due to the professional dedication of our highly motivated staff which supported this large-scale experiment," Schlösser emphasizes.

The researchers involved in the KATRIN project describe their next goals: "Further measurements of the neutrino mass will continue until the end of 2024. To exhaust the full potential of this unique experiment, we will steadily increase the statistics of signal events and continuously develop and install upgrades to further reduce the background rate." The development of the new TRISTAN detector system will be of particular importance. From 2025, it will allow KATRIN to embark on a search for “sterile“ neutrinos with masses in the keV range. Such sterile neutrinos would be candidates for the mysterious dark matter that has already become manifest in many astrophysics and cosmological observations, but the physical nature of which is still unknown. (jh)