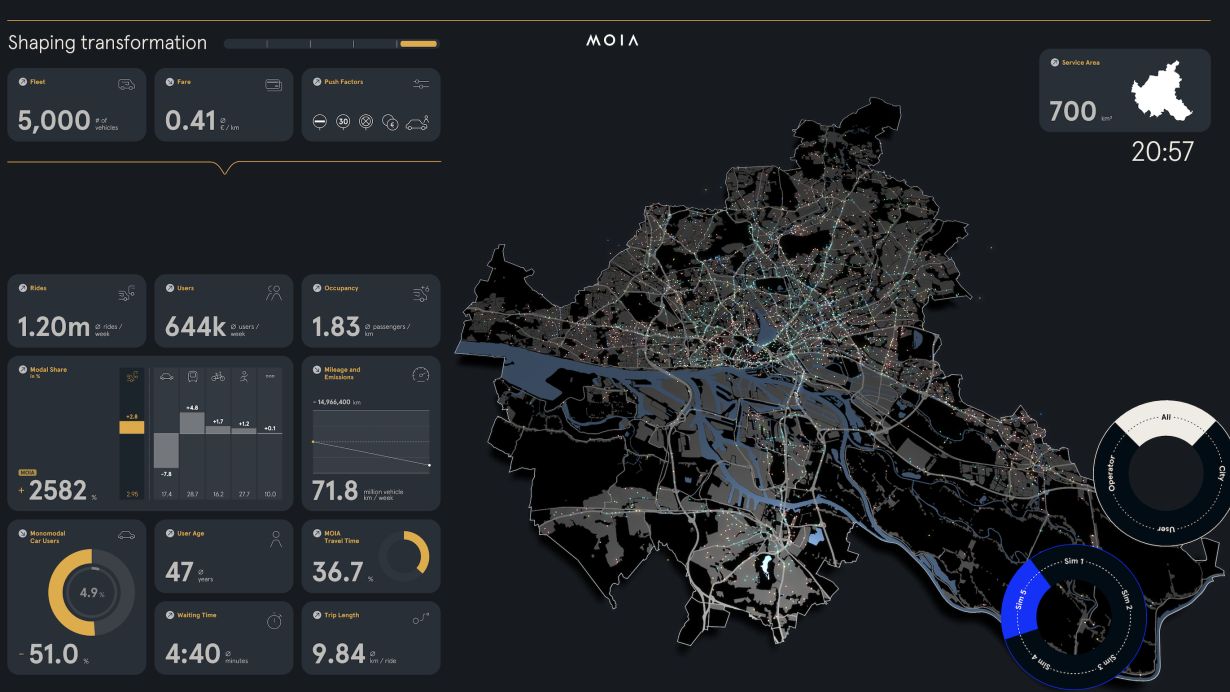 The simulation models mobility of the citizens of Hamburg and all visitors over a week. (Detailed caption at the end of the text; Figure: MOIA Simulation)

Transportation offers on demand benefit the mobility transition. This was found by researchers of Karlsruhe Institute of Technology (KIT) in an extensive transport simulation. For two years, they studied the effects of Europe’s biggest electric ridepooling service operated by MOIA on the traffic situation in Hamburg. The study with a specially developed simulation tool for the first time provides scientifically independent findings for MOIA, transport policy, and transport planning. And it confirms that ridepooling can help reduce car traffic in the city. This effect is increased when it is less attractive to use the own car in the city.

“Our simulations based on surveys and many other data reveal that mobility transition will be possible when attractive alternatives to the private car are provided and stricter regulations for motorized individual transport will be adopted,” says Dr. Martin Kagerbauer from KIT’s Institute for Transport Studies (IfV). “Our study provides major indications as to which elements are needed to push the mobility transition.”

Together with the Technical University of Munich, Kagerbauer and his team studied the impacts of ridepooling services offered by MOIA on the transport system in Germany’s second largest city Hamburg for a period of two years. MOIA is a company of the Volkswagen Group and offers ridepooling services to close the gap between taxis and public transport. An algorithm ensures that users having similar destinations are transported together in the same vehicle. Transportation takes place independently of a timetable or a fixed route. On the way, passengers can get on and off flexibly. Whoever likes a lift can order the vehicle via an app on his or her mobile phone. Then, an algorithm plans and optimizes the route. “Having completed our study, we can now understand the behavior of people pooling rides much better and, hence, will be able to open up the potentials of such services more specifically in future,” Nadine Kostorz, IfV, says.

A simulation of a scenario with full availability of autonomous ridepooling services with many vehicles, well-developed public transport systems, and simultaneous restrictions of car traffic revealed that car traffic in Hamburg might be reduced by eight percent. “Vehicle kilometers would decrease by about 15 million per week, which is remarkable. This would make mobility in Hamburg far more sustainable and greener,” Kagerbauer says.

Travel simulation with the mobiTopp software tool developed by KIT is unique. “The tool models all trips of the population of Hamburg and of all persons traveling there for a period of one week. We model precisely to the minute and with high spatial resolution all routes to all activities, such as work, shopping or leisure activities,” Kagerbauer explains. “The new thing is that our tool does not only consider conventional transport means, but also new types of mobility, such as ridepooling and car, bike, or e-scooter sharing.”

Details on the results and methods of the study (in German): https://www.moia.io/news-center/downloads/211207_MOIA_Ergebnisbericht_Begleitforschung.pdf

Detailed figure caption: The simulation models the mobility of the citizens of Hamburg and all visitors over a week. The modelling tool considers car, bike, and e-scooter sharing services in combination with a fleet simulation of the MOIA vehicles. (Figure: MOIA Simulation)