Refuels Are Suited for Wide Use 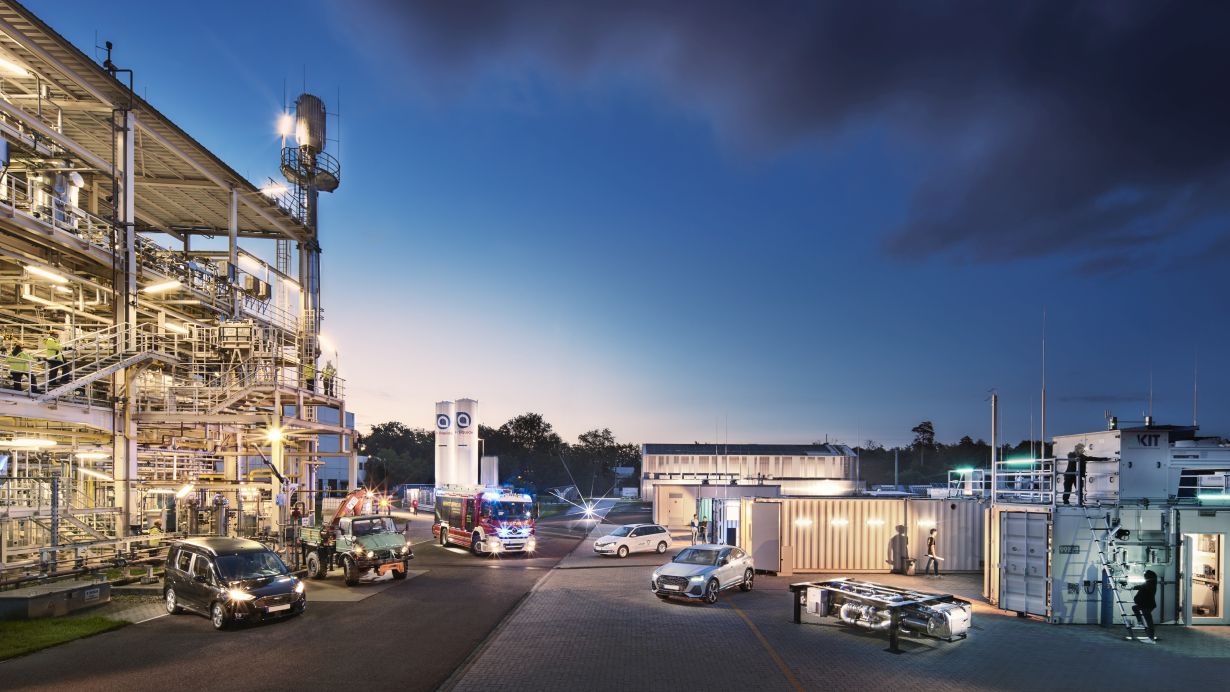 Refuels may be used in cars as well as in special vehicles and rail engines. (Photo: Markus Breig and Amadeus Bramsiepe, KIT)

Refuels are renewable fuels that can be produced in different ways. When they are mixed and processed such that they meet the existing fuel standards, they are suited for all types of combustion engines. This is the result of the latest vehicle and fleet tests within the project “reFuels – Rethinking Fuels” at Karlsruhe Institute of Technology (KIT). Compared to fully fossil fuels, refuel mixes allow for a CO2 reduction by 25% at least. Moreover, refuels slightly improve the pollutant emissions.

“In our mobility mix, liquid fuels will be needed for quite some time yet in long-distance heavy load traffic, shipping, aviation, and in existing private cars. Here, synthetic fuels can be a complementary solution for the defossilization of transport,” says Dr. Uwe Wagner from KIT’s Institut für Kolbenmaschinen (IFKM). “For this purpose, they have to be produced sustainably and must be rapidly available,” says Professor Nicolaus Dahmen, who is responsible for fuel supply in the reFuels project. For all types of conventional fuels used today, both established and new supply processes exist. “The presently tested refuel mixes already lead to a CO2 reduction by 25% compared to purely fossil fuels,” Dahmen adds. The reFuels project confirmed this for some fuels produced by KIT technologies and for commercially available hydrotreated vegetable oil (HVO).

“The refuel mixes studied so far meet existing standards for gasoline and diesel fuels. We did not find any unfavorable properties of refuels in car tests. In some cases, refuels even slightly improved pollutant emissions compared to both diesel and gasoline vehicles,” Wagner summarizes the results of RDE (real driving emissions) tests of commercially available R33 and KIT-synthesized G40. Wagner and his team of IFKM studied the behavior of refuels under real driving conditions in Karlsruhe and the region. Drives took place in the city, on motorways, and on country roads in compliance with latest legal requirements for the certification of new vehicles. For KIT’s test drives, four different cars were equipped with a portable emission measurement system (PEMS). This instrument is also used in the European research project MetroPEMS and can measure nitrogen oxide, particle, and CO2 emissions during the drive. In addition, fleet tests were carried out with six trucks. They covered a total of 350,000 kilometers using C.A.R.E diesel® made of 100 percent commercially available HVO. “Again, no application problems were found,” Wagner says. In future, it is planned to increase the fleet and to extend endurance testing until 2024. “Tests of a rail engine with R33 and pure HVO produced the same results as the road tests,” the expert adds.

As envisaged by the holistic project concept, the regenerative fuels were subjected to ecobalancing. All energy and fuel flows in connection with the supply and use of refuels and their fossil counterparts were recorded and analyzed. “Results show that refuels have a significant CO2 reduction potential,” says Dr. Andreas Patyk from KIT’s Institute for Technology Assessment and Systems Analysis (ITAS). “To exploit the greenhouse gas reduction potentials of electrolysis-based e-fuels, all power consumed must be of regenerative origin.” The CO2 needed for synthesis may be separated from air or from waste gas flows of e.g. biogas, sewage treatment, or cement plants. “To establish this technology, PtX plants have to be operated for a sufficient number of hours at full load,” Patyk continues.

Refuels Are Produced at KIT

At KIT, various fuel mixes were produced from regeneratively synthesized fuel components (refuels) and fossil fuels by means of different processes. These fuel mixes meet existing standards, such as EN590 for diesel fuels and EN228 for gasoline. The mixes are drop-in fuels, meaning that they can be used in existing combustion engines. “But this is not enough to satisfy us,” Dahmen says. “The ultimate goal of our development work must be the production of fuels without any fossil fractions.”

KIT possesses two plants for the synthesis of refuels: The bioliq® plant on KIT’s Campus North processes straw to produce synthetic gasoline of the second generation, so-called advanced biofuels. Contrary to biofuels of the first generation, synthesis of these advanced biofuels does not compete with the production of foodstuff and feedstuff on agricultural areas. “We have to avoid the food or fuel discussion. That is why we rely on raw materials that do not entail this conflict,” says project coordinator Dr. Olaf Toedter. At the neighboring Energy Lab 2.0 of KIT, e-fuels are produced by the electrolysis of water using regenerative power and CO2. The main goal is to produce kerosene. In addition, diesel and gasoline fractions are obtained. The CO2 produced when combusting e-fuels is compensated by using CO2 from ambient air or biogenic sources for their production.

The project launched in January 2019 covers the production and use of renewable fuels in a holistic approach. In future, such fuels can be used in combustion engines of cars, commercial and railway vehicles as well as in aircraft. Six institutes of KIT, in cooperation with several partners from energy, mineral oil, automotive, and supply industries, are working on the supply and introduction of refuels within the Strategy Dialog for the Automotive Sector in Baden-Württemberg. Two pilot plants and other prototype facilities of KIT supplied the regenerative fuels that were processed, characterized, and tested in test engines. This way, synthesis processes for refuels were optimized to reduce raw emissions. (cko)