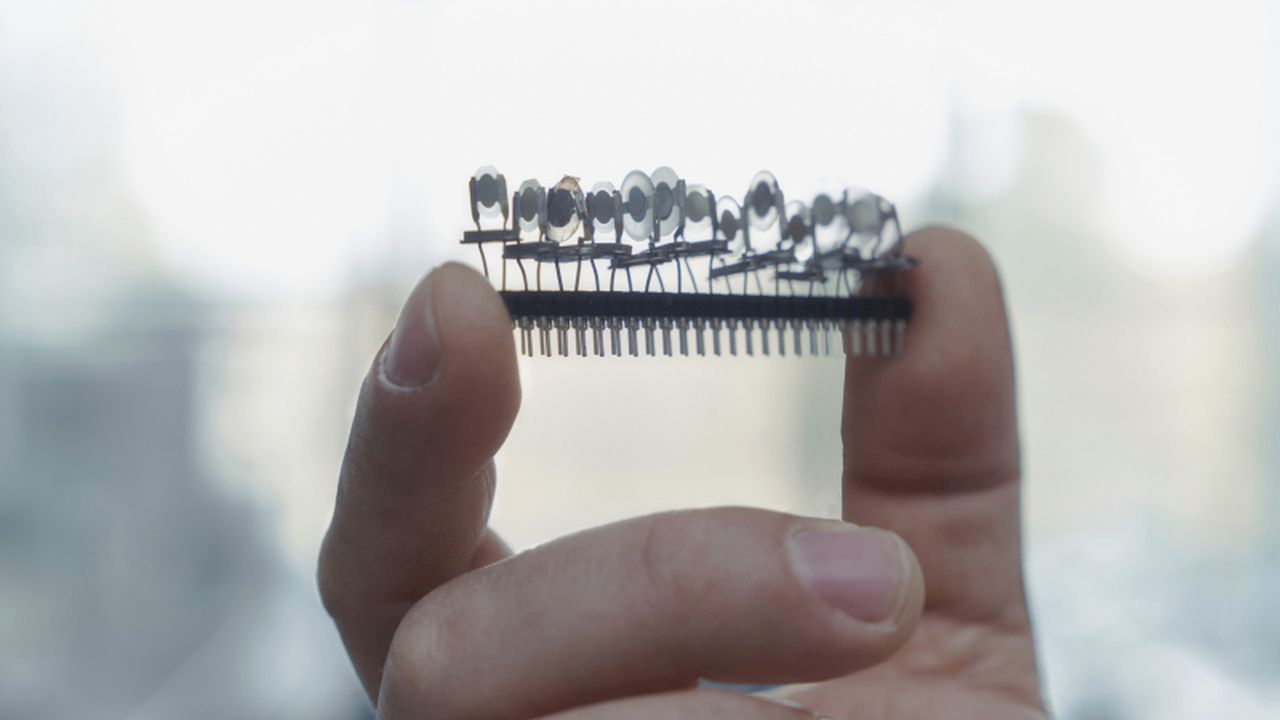 The combination of sensors and materials simulates the artificial sense of smell. (Photo: Amadeus Bramsiepe, KIT)

In nature, scents emitted by plants attract animals such as insects. However, scents are also used in the industry, for example in the production of perfumes and aromas. In order to achieve a reliable, quick, and objective discrimination of mint scents in particular, researchers at KIT (Karlsruhe Institute of Technology) embarked on an interdisciplinary collaboration and developed an electronic nose with an artificial sense of smell. This E-nose achieves high precision in recognizing different mint species, which makes it a suitable tool for applications ranging from pharmaceutical quality control to the monitoring of mint oil as an environmentally friendly bioherbicide.

“So far, scientists were able to identify an estimated 100,000 different biological compounds through which neighboring plants interact with each other or control other organisms, such as insects,” says Professor Peter Nick from the Botanical Institute of KIT. “These compounds are very similar in plants of the same genus.” A classic example from the plant world is mint, where the different varieties produce with very species-specific scents. Industrial quality control of mint oil, in particular, is subject to strict legal regulations in order to prevent adulteration, is time-consuming, and requires a great deal of expertise, the scientist explains. A new “electronic nose” equipped with sensors made from combined materials will support this process. Researchers from the Botanical Institute, the Institute of Functional Interfaces (IFG), the Institute of Microstructure Technology (IMT), and the Light Technology Institute (LTI) of KIT jointly developed and tested these sensors with six different mint species.

Electronic Nose Based on a Biological Model

In the development of the E-nose, the entire research team has been guided as far as possible by the biological model: The olfactory cells, which in humans transmit information to the brain via electrical pulses, are replaced by twelve special QCM (Quartz Crystal Microbalance) sensors. These sensors consist of two electrodes equipped with a quartz crystal. Among others, such components can also be found in mobile phones, as they guarantee highly accurate mobile phone frequencies at low cost. “The mint scents are deposited on the surface of the sensors. This changes their resonant frequency and we get a reaction to the respective scent,” explains Professor Christof Wöll from the IFG. Scents consist of organic molecules in different compositions. To enable the new sensors to absorb these molecules, the IFG researchers used twelve specific sensor materials, including the metal-organic frameworks (MOFs) developed at the IFG. “These materials are highly porous and particularly well suited for sensor applications because they can absorb many molecules like a sponge,” Wöll says. “By combining the sensors with the different materials, we create what might be called a neural network.”

The scientists tested the electronic nose with six different mint species – including classic peppermint, horsemint and catnip. “We use different machine learning methods to train the sensors so that they can create the fingerprint of the respective scent from the collected data and thus distinguish the scents,” Wöll says. After each scent sample, the E-nose is flushed with carbon dioxide (CO2) for about half an hour to allow the sensors to regenerate.

The results obtained by the interdisciplinary research team have shown that the electronic nose with its QCM sensors can assign mint scents with a high specificity to a particular species. In addition, it is a user-friendly, reliable, and cost-effective alternative to conventional methods such as mass spectrometry, the scientist further states. Further development will focus on sensors that regenerate more quickly for picking up scents again. The IFG researchers will continue to concentrate on MOF materials in order to adapt them for other applications, such as artificial olfactory perception for medical diagnostics. (ase)