From Thunderstorms to Heavy Rain and Droughts 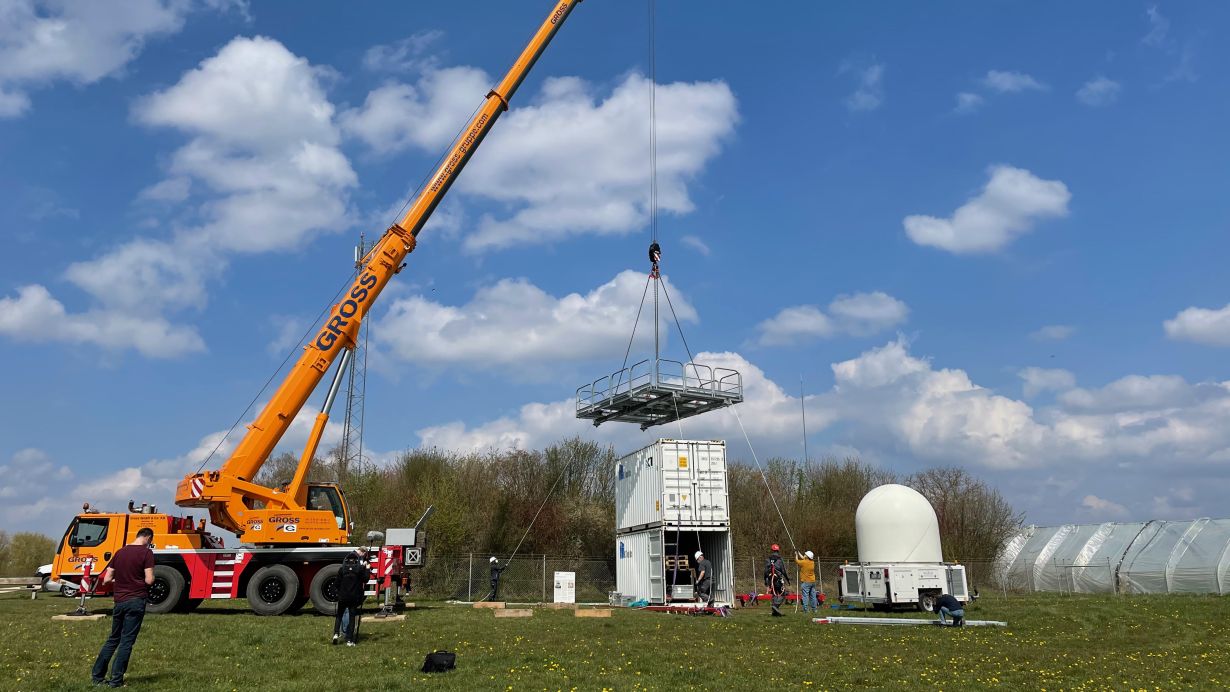 Setup of the KITcube precipitation radar for measuring precipitation within a radius of 100 kilometers in the Swabian Alb/Neckar valley region. (Photo: Andreas Wieser, KIT)

Extreme weather events such as severe thunderstorms, hailstorms, or heatwaves are also increasing in Germany, sometimes causing major economic and infrastructural damage. The MOSES Helmholtz initiative, in which the Karlsruhe Institute of Technology (KIT) also takes part, studies the complex physical processes involved in the formation of these weather events. The aim of the “Swabian MOSES” measurement campaign, which is due to start now and will be coordinated by KIT, to conduct a holistic study of the causes, effects, and interactions of hydro-meteorological extremes. The study area in Baden-Württemberg (Southern Germany) is known for frequent thunderstorms, heat, and drought periods.

In order to study the impacts of meteorological and hydrological extremes on the long-term development of Earth and environmental systems, nine research centers of the Helmholtz Association will set up MOSES, the mobile and modularly deployable observation system. MOSES stands for Modular Observation Solutions for Earth Systems; the system is to be operational by 2022. Test campaigns are an important step stone in this development, as these new measurement systems need to be tested, enhanced, and coordinated with each other in mobile use. For 2021, two of these campaigns on different issues and relating to different study regions have been planned so far – in the Swabian Alb region and on the Elbe River.

In May, the "Swabian MOSES" measurement campaign will start in the Swabian Alb region and in the valley of the Neckar River in Baden-Württemberg. The campaign is expected to run until mid-September and will be coordinated by KIT. It focuses on two hydro-meteorological extremes – drought and heavy rainfall. For example, the frequent occurrence of multi-week droughts in 2018-2020 caused groundwater levels to drop to historic lows last year, and many rivers experienced pronounced low water, leading to significant restrictions on shipping, irrigation, and power plant cooling.

“Due to its complex topography and geographical location, the study region is quite frequently affected by thunderstorm events, even severe ones,” says Professor Michael Kunz of KIT’s Institute of Meteorology and Climate Research – Troposphere Research Department (IMK-TRO), one of the coordinators of the project. “For example, a hailstorm that occurred precisely in our study region in July 2013, in which hailstones with diameters of up to 10 centimeters were observed, caused damage of around one billion euros.” The heavy rainfall that accompanies thunderstorms can also cause local flash floods on slopes or in urban areas with a high degree of soil sealing, leading not only to significant damage but also to massive sediment and pollutant transport in water bodies.

Impact of Thunderstorms on Atmosphere, Climate, and Ecosystems

KIT will use its mobile KITcube observatory. “KITcube supplies detailed information on the state of the atmosphere during the formation and development of thunderstorms, the first focus of our measurement campaign,” explains Dr. Andreas Wieser, KITcube Science Director. “This will be achieved by combining advanced remote sensing equipment with a variety of local measurement systems distributed throughout the observation area.” These include a state-of-the-art cloud radar, a precipitation radar, a network of lidars that enable the measurement of atmospheric airflows using lasers, weather balloons, and weather stations. A novel mobile cloud chamber of KIT measures the amount of ice-forming particles that are jointly responsible for precipitation and hail formation in thunderclouds. For the first time, KIT will also test small swarm probes that reproduce the wind conditions and thus also the paths of hailstones within a thundercloud in order to better understand the growth processes of precipitation particles, in particular of hail.

During the campaign, the University of Hohenheim will operate its network of soil moisture and energy balance stations at the Land-Atmosphere Feedback Observatory (LAFO) to measure energy, air humidity, and CO2 fluxes near the ground. In addition, several state-of-the-art lidar remote-sensing devices will simultaneously measure the distribution of air humidity, temperature, and wind as well as their fluctuations in the atmosphere.

Scientists at Jülich Research Center will launch balloon probes rising up to an altitude of 35 kilometers in order to determine, among other things, the long-term impact of thunderstorms on the climate. The DWD will carry out additional balloon releases at its Stuttgart-Schnarrenberg site to obtain information on important weather parameters before a thunderstorm materializes. During three weeks in June and July, two research aircraft of the Technical University of Braunschweig will fly close to thunderstorms to collect data. On-board measuring instruments allow the determination of energy and humidity fluxes within the atmosphere. In addition, a lidar developed by KIT has been installed that records vertical wind profiles along the flight path. From this data, it is possible to draw conclusions as to the airflow in the areas where thunderstorms originate.

Researchers from the University of Tübingen and the UFZ will study the influence of heavy rainfall and flooding on the material load of flowing waters. Here, the scientists will particularly focus on dissolved and particle-bound pollutants that enter water bodies from various sources due to heavy rainfall, and the resulting toxicity to the aquatic ecosystem. The objective of the studies is to determine the sediment input pathways in hydrologically different catchments, which differ in terms of land use and degree of urbanization, and to determine the water quality. Some of the samples will be analyzed at the UFZ for organic pollutants and their mixture toxicity. In cooperation with KIT, the researchers will also study the exchange of greenhouse gases between flowing waters and the atmosphere.

Development of Heat and Drought Periods in the Region

In order to determine the effects of heat and drought stress on agricultural areas of the Swabian Alb region, KIT will set up measuring stations at several locations to quantify the energy and matter exchange between the affected ecosystems and the atmosphere. The GFZ adds to these measurements using airborne sensors attached to drones. In addition, KIT will install several aerosol-measuring instruments to study the correlations between aerosol distribution and periods of heat and drought.

The UFZ scientists will study the dynamics of soil moisture as a key control variable for rainwater runoff and drought development. For this purpose, UFZ will install mobile, wireless sensor networks during the measurement campaign to measure soil moisture and temperature at different depths. In order to observe large-scale variations in soil moisture, an off-road vehicle with specially developed neutron sensors (Cosmic Ray Rover) will also be used. DLR will additionally measure the soil moisture near the surface using radar measurements from aircraft. To this end, the researchers will use innovative imaging methods and test new algorithms. To penetrate the soil, they will rely on long electromagnetic waves that generate characteristic signals depending on the soil moisture and vegetation. The results are also helpful when comparing different measurement methods with regard to their accuracy. (jwi-uwe)

Swabian MOSES (in German only): https://www.swabianmoses.de/

MOSES – in the right place at the right time (in German only): https://www.ufz.de/newsletter/ufz/Dezember2019/index.html#0

More information on the KIT Climate and Environment Center: https://www.klima-umwelt.kit.edu/index.php