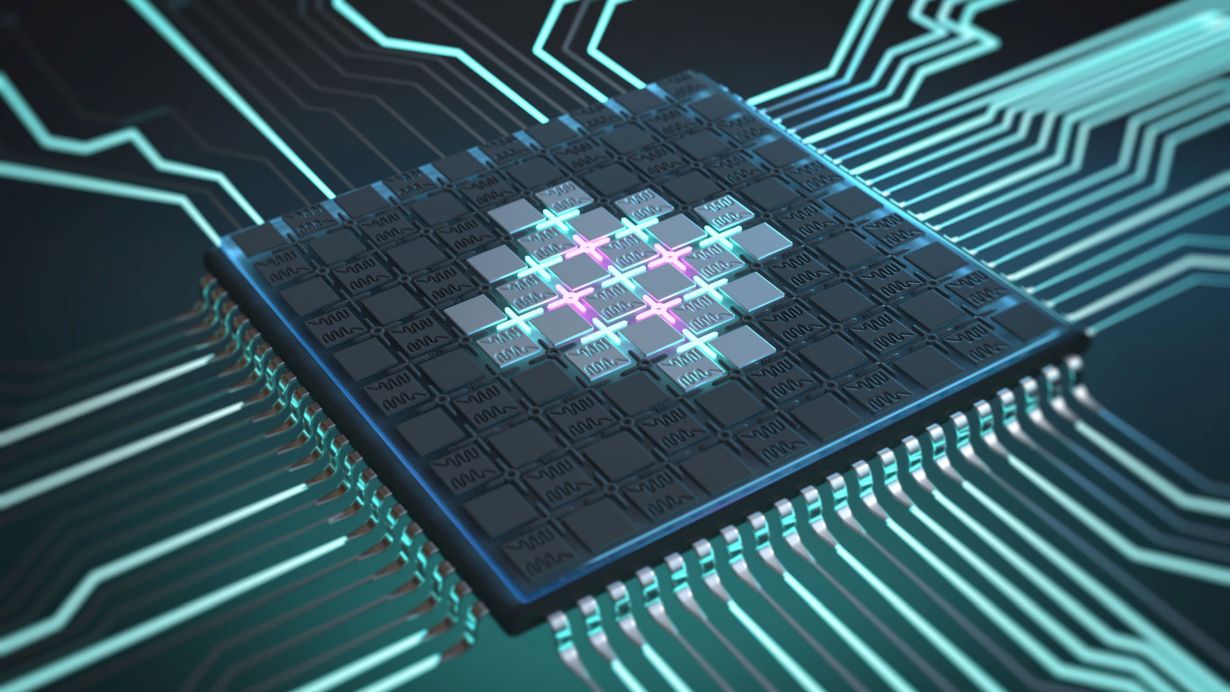 Visualization of a quantum processor: Its core contains a chip on which superconducting qubits are arranged in a checkered pattern. (Figure: Christoph Hohmann)

Quantum computers will efficiently solve problems that could not be solved in the past. Examples are calculations of properties of complex molecules for pharmaceutical industry or solutions of optimization problems for manufacturing processes in automotive industry or for calculations in the financial sector. Within the framework of the “GeQCoS“ collaboration project, Germany’s leading researchers in the area of superconducting quantum circuits are working on innovative concepts for designing better quantum processors. Researchers from Karlsruhe Institute of Technology (KIT) play an important role in the project.

The collaboration project “German Quantum Computer Based on Superconducting Qubits,” GeQCoS for short, is aimed at developing a prototype quantum processor consisting of a few superconducting qubits with fundamentally improved components. The main components of a quantum computer, the quantum bits or qubits, will be implemented by zero-resistance currents in superconducting circuits. These currents are relatively robust against external disturbances and can preserve quantum states during operation.

The planned improvements will consist in an increase in connectivity, that is the number of connections among the qubits, as well as in the quality of qubits, that is the possibility to rapidly and efficiently produce the desired quantum states. “ Currently, this is a big challenge,” says Dr. Ioan Pop from KIT’s Institute for Quantum Materials and Technologies. “Use of novel materials for the production of qubits is expected to result in better reproducibility and higher quality of the qubits.”

Important Step towards the Development of Superconducting Quantum Circuits in Germany

To achieve improvement, researchers collaborate closely in the areas of alternative components, change of architecture, coupling mechanisms, and higher precision of calculations. “This is a very important step towards the development of superconducting quantum circuits in Germany. This technology is preferred and pursued by IT managers in the area of quantum computers,” Professor Alexey Ustinov, Head of the research group at KIT’s Physikalisches Institut, emphasizes. “Localization and diagnosis of errors is rather challenging work. We have to improve fabrication methods to prevent faults that sustainably influence the quality of the qubits.”

Today, quantum computers already are able to manage small specific problems and to exhibit basic functions, the experts say. In the long term, work is aimed at developing a so-called universal quantum computer that calculates important problems exponentially faster than a classical computer. An architecture suited for the calculation of practically relevant problems requires substantial improvement of both hardware and software.

Development Will Be Made Available to Innovative First Users

To reach this goal, scalable fabrication processes and optimized chip housings will be developed within the project. Eventually, the prototype quantum processor will be installed at the Walther Meißner Institute of the Bavarian Academy of Sciences. The technologies developed are not only expected to lead to new scientific findings. Close interconnection with companies will strengthen the quantum ecosystem in Germany and Europe. On both the hardware and software level, the quantum processor will be made available to innovative first users as early as possible.

Apart from KIT, the University of Erlangen-Nuremberg, Forschungszentrum Jülich, Walther Meißner Institute of the Bavarian Academy of Sciences, Technical University of Munich, Infineon, and the Fraunhofer Institute for Applied Solid State Physics are involved in the project. The “GeQCoS“ project is funded by the Federal Ministry of Education and Research with EUR 14.5 million. Of these, more than 3 million euros go to KIT. (jwa)