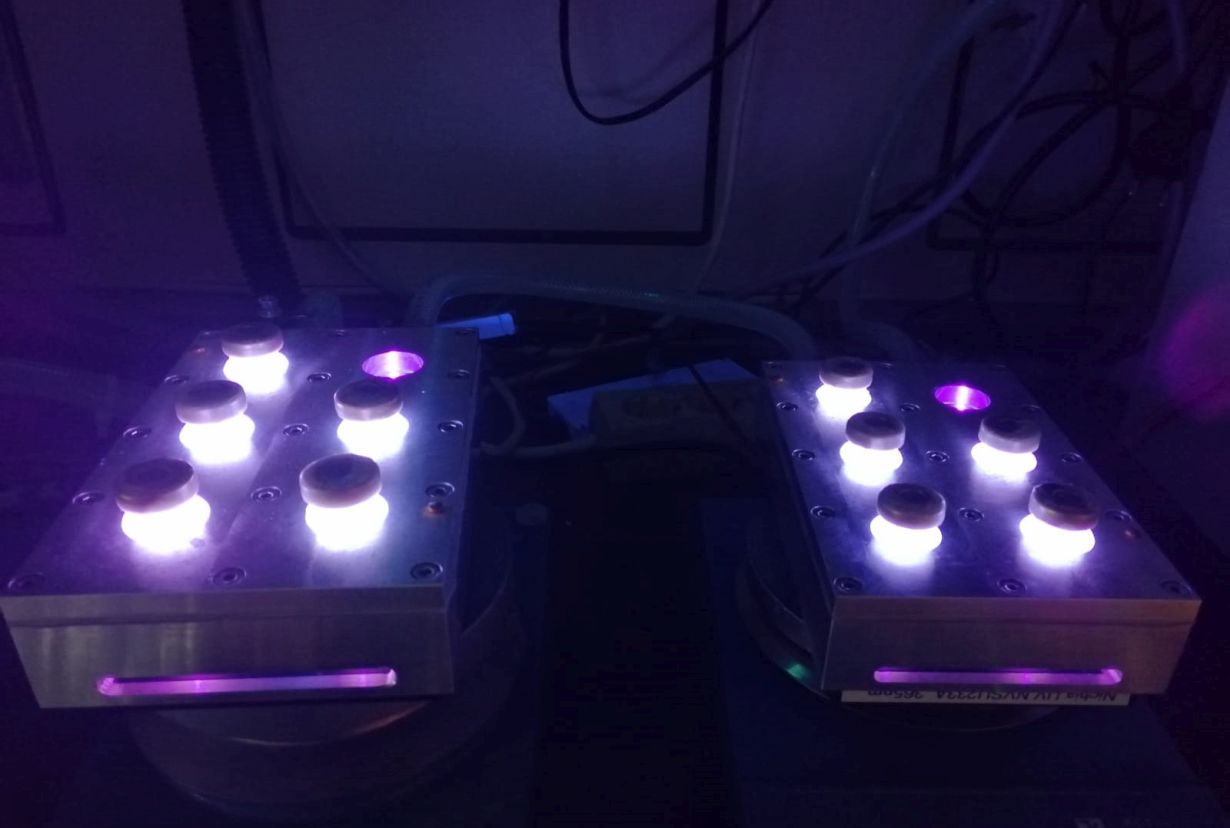 DNA is exposed to UV radiation from LEDs to study how far the photoenergy migrates. (Photo: Arthur Kuhlmann, KIT)

Ultraviolet light endangers the integrity of human genetic information and may cause skin cancer. For the first time, researchers of Karlsruhe Institute of Technology (KIT) have demonstrated that DNA damage may also occur far away from the point of incidence of the radiation. They produced an artificially modeled DNA sequence in new architecture and succeeded in detecting DNA damage at a distance of 30 DNA building blocks. The results are reported in Angewandte Chemie (DOI: 10.1002/anie.202009216).

“So far, we have thought that it is impossible for light energy to be transmitted so far in the DNA and cause damage there,” says Professor Dr. Hans-Achim Wagenknecht from KIT’s Institute of Organic Chemistry. The research results are presented in Angewandte Chemie and are ranked as extraordinarily important and in the best ten percent by the journal. For the study, a synthetically produced, modified DNA of a certain architecture was used. At certain points of this short gene section, researchers inserted a xanthone molecule as photoenergy injector. To specify where the UV radiation produced by LEDs was to cause damage in the experiment, scientists inserted pairs of thymines at defined distances from this light injector. Thymine is one of four nucleobases and, hence, one of the major building blocks of DNA. The most frequent damage of DNA caused by light results from linking neighboring thymines: Due to the light energy, they form solid compounds of cyclobutane pyrimidine dimers (CPD).

Having defined the positions of CPD formation, the team succeeded in proving migration of photoenergy over 30 DNA building blocks corresponding to a distance of up to 10.5 nanometers. “This surprisingly long range is crucial to the understanding of DNA photodamage,” Wagenknecht says. CPD damage is considered the molecular cause of skin cancer, because genetic information can no longer be read or cannot be read correctly.

DNA damage can be detected up to 30 DNA building blocks away from the point of incidence of the light. (Graphics: Hans-Achim Wagenknecht, KIT)

The question of how far energy can migrate is still open. Above all, the scientists wanted to find out where photodamage develops. Another important aspect is that xanthones artificially introduced into the DNA as light injectors may be contained in many common substances, such as antibiotics, and may increase light sensitivity of the skin after intake.

Doctoral researcher Arthur Kuhlmann and student Larissa Bihr from the team of Wagenknecht were largely involved in the publication. The project was funded by the German Research Foundation (DFG) with a total of about EUR 430,000 for the position of the doctoral researcher and consumables. In the next step, the group will study the mechanism of energy migration in detail.