How to Make Catalysts More Efficient 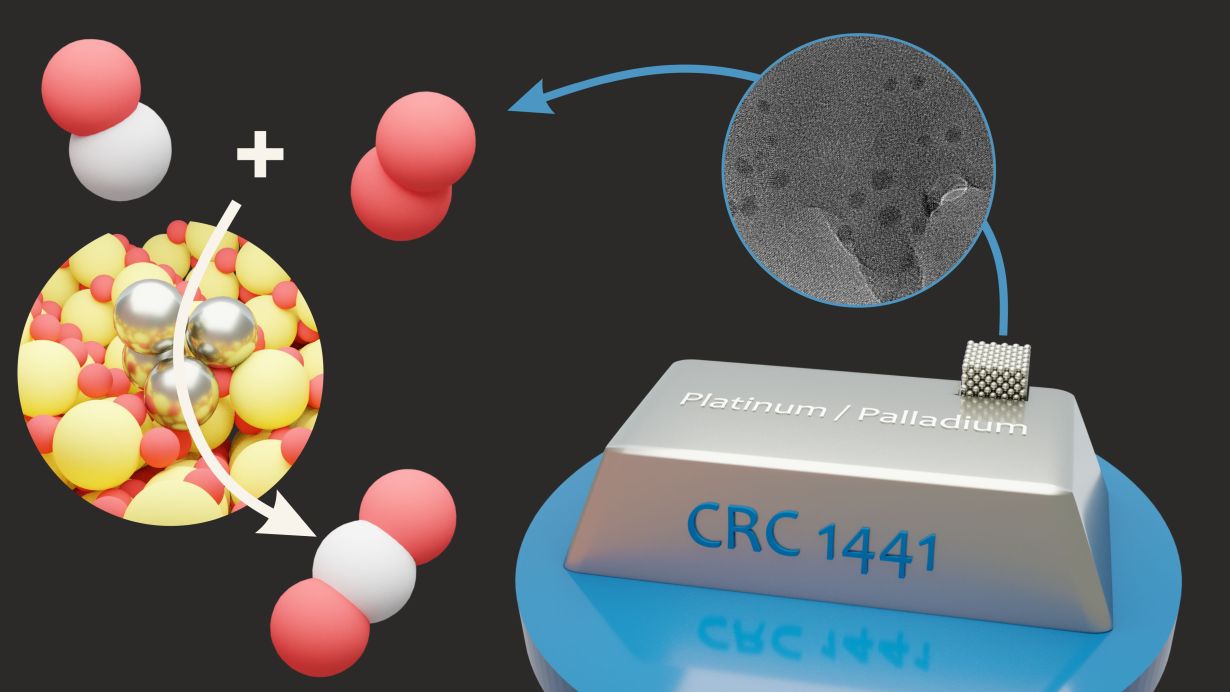 A platinum/palladium noble metal block, the atoms, and deposition of a platinum cluster on cerium oxide that acts as efficient catalyst. (Figure: ITCP/KIT)

Heterogeneous catalysts based on noble metal clusters and particles play an important role in chemical processes and can effectively reduce harmful emissions. However, they are far more dynamic than assumed so far and many of the occurring effects are poorly understood. The German Research Foundation (DFG) now funds a new Collaborative Research Center at Karlsruhe Institute of Technology (KIT) that is aimed at holistically understanding catalytic processes: “TrackAct – Tracking the Active Site in Heterogeneous Catalysis for Emission Control.”

“High-performance catalysts are of great importance to many areas, such as industrial production, energy supply, and mobility. Approval of the new Collaborative Research Center reflects the high relevance of KIT’s research to society and the environment,” says the President of KIT, Professor Holger Hanselka. “I cordially congratulate the scientists involved on this success!” Collaborative Research Centers (CRCs) enable interdisciplinary work on innovative, complex, and long-term projects through coordination and concentration of resources and, hence, allow new focuses and structures to be established at the universities submitting the proposals. CRCs are funded for a maximum duration of twelve years. Spokesperson of the new CRC “TrackAct” is Professor Jan-Dierk Grunwaldt, Member of the Board of the Institute for Chemical Technology and Polymer Chemistry (ITCP) of KIT. Work of the CRC is carried out by 19 researchers of KIT in cooperation with four colleagues from the Technical University of Munich and the German Electron Synchrotron in Hamburg. “The complex subject of this interdisciplinary Collaborative Research Center is of high relevance to future energy and mobility and, hence, to our environment and health,” says KIT’s Vice-President for Research, Professor Oliver Kraft. “The participating researchers can build on their successful collaboration in the past years and advance it systematically.”

Noble metals, such as platinum, palladium, or rhodium, are of great importance to catalysis. They are applied for the production of fine chemicals or the removal of gaseous pollutants emitted by industry, business, and households and generally by combustion processes. It is the vision of the Collaborative Research Center “TrackAct” to design noble metal catalysts with atomic precision and to track and control in detail the active site in the reactor, also in technical systems. Catalysts of enhanced activity and longevity will be developed. “For this purpose, the structure of noble metals will be adjusted precisely by specific synthesis and defined reaction conditions,” says the CRC’s Deputy Spokesperson, Professor Felix Studt from KIT’s Institute of Catalysis Research and Technology (IKFT). “In future, this may help reduce consumption of noble metals and protect resources. Currently, more than 60% of the noble metals extracted and recycled worldwide are consumed in this area.”

Within the CRC “TrackAct,” researchers will first identify the optimum catalyst structure by preparing noble metal clusters with atomic precision and examining the catalytic reactors using latest spectroscopic methods. In addition, the lifecycle of the cluster in the reactor will be investigated and modeled by theoretical approaches in order to predict structural modifications and adjust them by sophisticated procedures. The optimum cluster size, the corresponding atomic structure, perfect application to ceramic carrier materials, and their installation in suitable reactors are of high importance.

The CRC is aimed at representing all structures and length scales by theoretical models and simulations. In ten years’ time, it may then be possible to predict all catalyst qualities and ideally adjust both the structure and reactor. Hence, the CRC does not only cover the development of new catalysts, but also the design of preparation, characterization, and digitization methods, which will play a major role in areas far beyond catalysis in future.

DFG is presently establishing 20 new Collaborative Research Centers at universities to further strengthen cutting-edge research. As of January 01, 2021, the new CRSs will be funded with a total amount of EUR 254 million for initially four years. In January 2021, a total number of 283 CRCs will be funded by DFG.