Urban Mobility: Together or Against Each Other

In the New “Cape Reviso“ Project, Researchers of KIT Determine How Cyclists and Pedestrians Feel When They Meet in Traffic 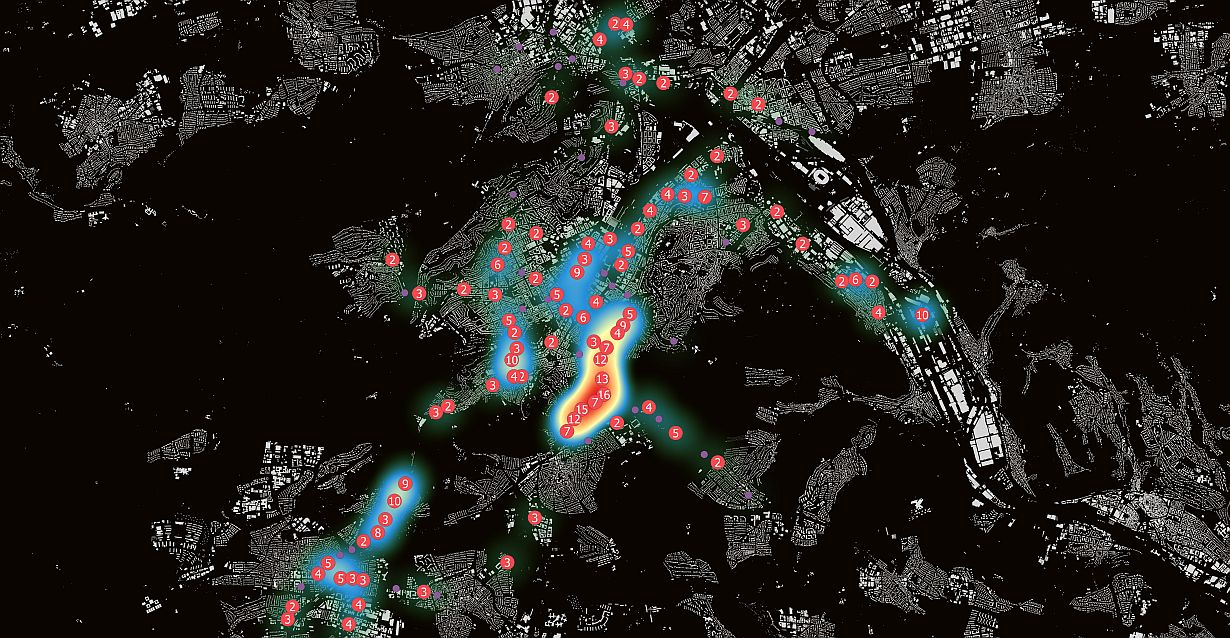 Situations in which cyclists were overtaken by cars with a distance of less than 1.5 m, as measured by the “OpenBikeSensor”. (Photo: Peter Zeile, KIT)

The urban transport area is a scarce and, at its interfaces, an often fiercely contested good. The “Cape Reviso” project has now been launched to study the relationship between pedestrian and bicycle traffic. The project partners are Karlsruhe Institute of Technology (KIT), the High Performance Computing Center Stuttgart (HLRS), and the Allgemeiner Deutscher Fahrradclub e.V. (ADFC, General German Bicycle Club). Their goals are a methodologically new analysis and the development of innovative instruments for evidence-based, conflict-free urban planning. The expertise pooled by the “Urban Emotions” initiative in Karlsruhe will be used to consider the views of traffic participants.

A combined sidewalk and cycle path, a bus stop with cyclists flashing by: There are many interfaces between walking and cycling and quite a few of them are dangerous. The just started “Cape Reviso” (Cyclists And PEdestrians on REal and VIrtual Shared rOads) project focuses on how transport areas in our cities can be planned to reduce conflicts.

The approach extends far beyond aspects covered by road traffic regulations or efficiency calculations. “Apart from factors, such as costs and trip duration, selection of the transport means depends on whether mobility is felt to be comfortable or uncomfortable,” says Dr. Peter Zeile of KIT’s Institute for Urban and Landscape Design (IESL). “Conflicts along the paths and subjectively felt stress in case of near misses that cannot be found in any statistics have a big influence. To support pedestrian and bicycle traffic, it is important to reduce conflicts experienced by weak traffic participants.”

The project that is financed by the Federal Ministry of Transport and Digital Infrastructure (BMVI) from funds of the National Bicycle Traffic Plan will start with a methodologically new survey: Cyclists equipped with distance sensors will identify locations at which overtaking cars do not observe the specified safety distances. At these locations, an AI-based camera system developed by the High Performance Computing Center Stuttgart will then acquire and analyze the complex behavior of the traffic participants.

Analysis of the inner view is the domain of KIT researcher Peter Zeile. Within the “Urban Emotions” initiative launched by him, the urban planner and his team determine how test persons in the project – pedestrians and cyclists – feel in everyday traffic. The researchers will link the distances measured to data from stress sensors and GPS trackers and from interviews. By means of an app, these rather different databases will be merged to visualizations of mobility-related emotions, so-called heat maps. “Things that make sense for transport planners,” Zeile says, “may not necessarily do so for certain traffic participants or groups of participants, such as children or elderly people. In “Cape Reviso,” we pursue both perspectives and take both seriously.”

In the second stage of the project, the findings of the survey will be transferred to applications of extended and virtual reality. In an interactive virtual environment (CAVE) of HLRS, researchers plan to find out how the identified points of conflict between pedestrians, cyclists, and car drivers can be defused by building separate, protected cycle paths or a general change of traffic routing. The reference place will be the city of Herrenberg, that has been available as a virtual model since 2018.

In its final stage, the project will focus on real traffic again. The project partners will turn selected areas in the cities of Baden-Württemberg into “living labs,” among others in the state capital of Stuttgart. There, the virtually developed ideas for reducing conflicts will be tested. For the project of three years’ duration, the project partners will provide the municipalities with a toolkit consisting of a prototype system for traffic acquisition, software components for traffic simulations in virtual reality, and a citizens participation app. In this way, transport planning decisions will be given a new basis in future.