Inheritance in Plants Can Now Be Controlled Specifically

For the First Time, KIT Researchers Use CRISPR/Cas Molecular Scissors to Recombine Genes on a Chromosome – Nature Communications Publishes Results 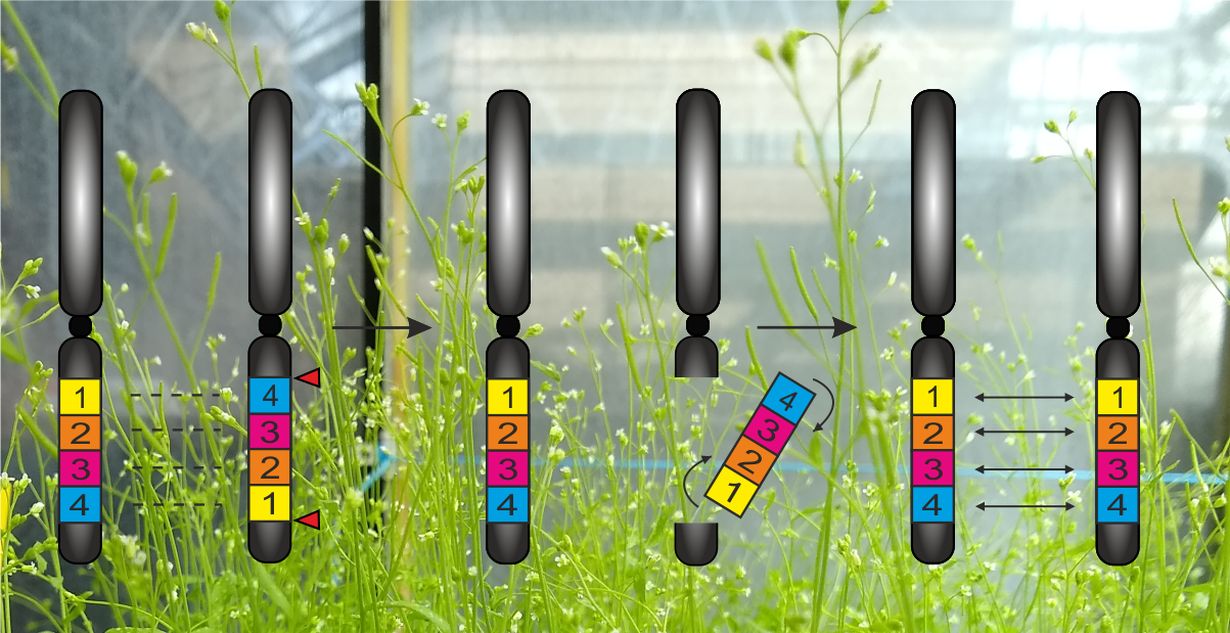 An inversion (left) in thale cress (background) can be undone with CRISPR/Cas (center) to reactivate the exchange of genes (right) in the said section. (Figure: Michelle Rönspies/KIT)

A new application of the CRISPR/Cas molecular scissors promises major progress in crop cultivation. At Karlsruhe Institute of Technology (KIT), researchers from the team of molecular biologist Holger Puchta have succeeded in modifying the sequence of genes on a chromosome using CRISPR/Cas. For the first time worldwide, they took a known chromosome modification in the thale cress model plant and demonstrated how inversions of the gene sequence can be undone and inheritance can thus be controlled specifically. The results are published in Nature Communications (DOI: 10.1038/s41467-020-18277-z).

About 5,000 years ago, genetic information of thale cress was modified. To date, it has spread widely and is of major interest to science. On the chromosome 4 of the plant, a so-called inversion occurred: The chromosome broke at two points and was reassembled again. The broken out section was reinserted, but rotated by 180°. As a result, the sequence of genes on this chromosome section was inverted. This chromosome mutation known as “Knob hk4S” in research is an example of the fact that evolution cannot only modify the genetic material of organisms, but determine it for a long term. “In inverted sections, genes cannot be exchanged between homologous chromosomes during inheritance,” molecular biologist Holger Puchta, KIT, explains.

Inversions do not only affect thale cress (Arabidopsis thaliana), a wild plant used as a model organism in genetics due to its completely decoded genome and its small chromosome number. Inversions can also be found in crop plants. They are an obstacle to cultivation that uses modifications of the genetic material to produce maximum yields and a good taste of the plant and to make the plant resistant to diseases, pests, and extreme climatic conditions.

For the first time, researchers from the Chair for Molecular Biology and Biochemistry held by Puchta at KIT’s Botanical Institute have now succeeded in undoing natural inversions. “We considerably extended the applications of the CRISPR/Cas molecular scissors,” Puchta says. “We no longer use the scissors for exchanging arms between chromosomes (http://www.kit.edu/kit/english/pi_2020_038_exchange-of-arms-between-chromosomes-using-molecular-scissors.php), but also for recombining genes on a single chromosome. For the first time, we have now demonstrated that it is possible to directly control inheritance processes. We can achieve genetic exchange in an area, in which this has been impossible before. With this, we have established chromosome engineering as a new type of crop cultivation.”

Together with researchers from the team of Professor Andreas Houben, Leibniz Institute of Plant Genetics and Crop Plant Research (IPK) in Gatersleben, and Professor Paul Fransz from the University of Amsterdam, KIT scientists took the most prominent natural inversion hk4S on chromosome 4 of thale cress and demonstrated how this inversion can be undone and how genetic exchange can be achieved in cultivation. Their findings are reported in Nature Communications. The researchers also think that it is possible to use CRISPR/Cas to produce new inversions, which would be another step towards combining desired traits and eliminating undesired properties in crop cultivation.

Holger Puchta is considered a pioneer of genome editing with molecular scissors using the natural principle of mutation to precisely modify the genetic information in plants without introducing foreign DNA. His current project “Multidimensional CRISPR/Cas mediated engineering of plant breeding,” CRISBREED for short, now focuses on the recombination of plant chromosomes by means of CRISPR/Cas technology. For this project, Puchta was granted the renowned Advanced Grant by the European Research Council (ERC) for the second time in a row. CRISPR (stands for Clustered Regularly Interspaced Short Palindromic Repeats) represents a certain section on the DNA that carries the genetic information. Cas is an enzyme that recognizes this section and cuts the DNA precisely at that point in order to remove, insert, or exchange genes, recombine chromosomes, and for the first time modify the gene sequence on them.