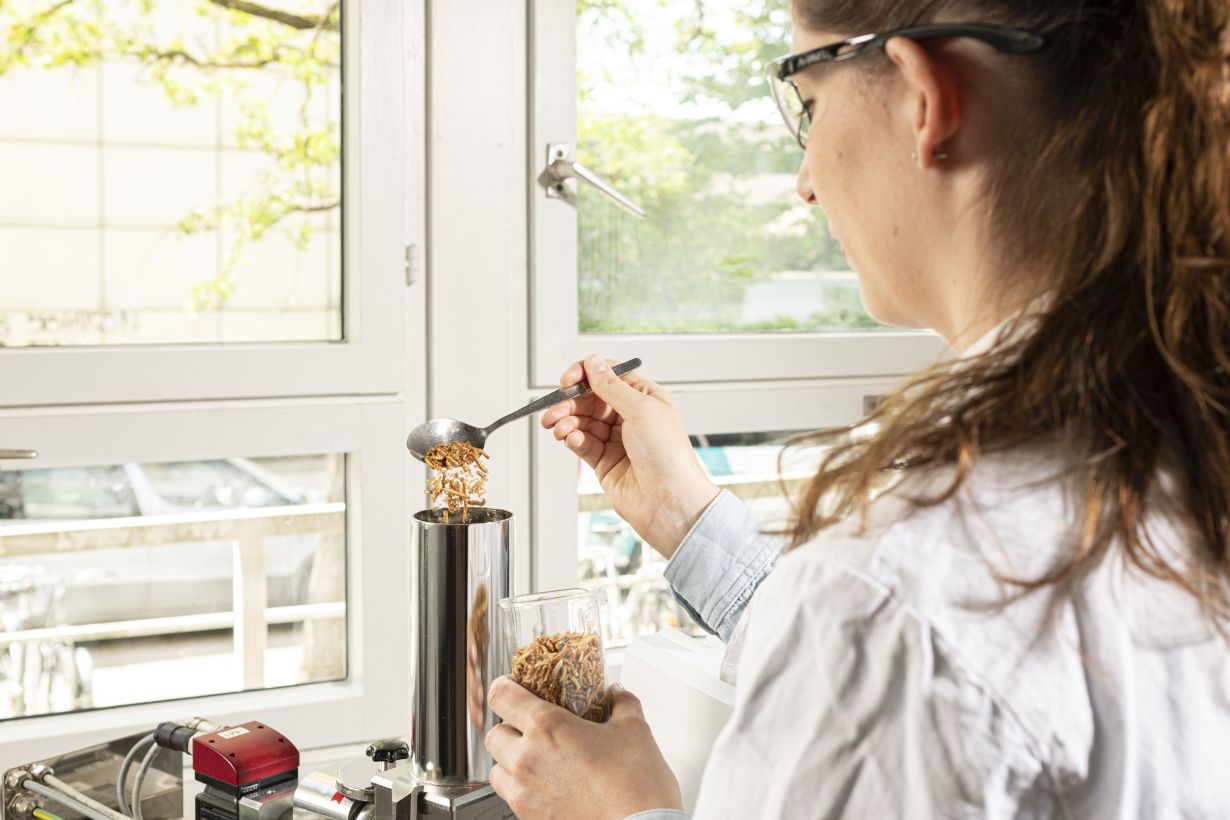 According to estimates of the United Nations Food and Agriculture Organization (FAO), population growth will cause the worldwide demand for animal proteins to double by 2050. Even if free agricultural areas would be used, this demand could not be covered by meat from cattle breeding alone. For this reason, researchers of Karlsruhe Institute of Technology (KIT) study production of new alternative protein sources. Their goal is to develop insect flours suited for e.g. bread production.

Insects are fixed nutrition constituents in many cultures of Asia or South Africa. In Europe, insect food rather is a niche product. Currently, industrial production focuses on mealworms (Tenebrio molitor) whose larvae contain many proteins. “Compared to beef, mealworms have the advantage of producing half as much CO2 and, hence, having a smaller ecological footprint,” says Dr. Azad Emin, KIT. The process engineer heads the junior research group “Extrusion of Biopolymers” of the Chair of Food Process Engineering (LVT) of KIT’s Institute of Process Engineering in Life Sciences.

Many consumers still refuse insects as unprocessed food in the form of a snack, for instance. First studies reveal, however, that acceptance of products in which the insects are no longer visible is higher. Processed to a powder, commercialization by use in traditional food, such as bread, is feasible on the German market. Bread still is one of the main energy sources, Emin explains. “Wheat flour with insect fractions may enrich the basic foodstuff with proteins and compensate potential deficiencies of other protein sources.

For processing the insects, food engineers use extrusion, a method that has long been used for producing pasta or cereals, for example. By adding water, a pasty or dough-like mass develops that is passed through spiral screws, heated, and then pressed through a nozzle. Afterwards, the dry mass is ground.

To reach a high acceptance of consumers, the new flours are to hardly differ from conventional baking flours in terms of taste, baking properties, and texture. As the high protein and fat contents of insect flours may cause changes of the dough, however, the LVT researchers analyze their physical and functional properties, such as dissolution capacity, water retention capacity, or elasticity. Work is aimed at improving these specific properties such that they correspond to the properties of conventional baking flours.

“Another advantage of the method is the deactivation of enzymes and the reduction of microbial contaminants. In addition, digestibility may be improved,” Emin says. As information on the effects of extrusion conditions on digestibility and bioavailability of the nutrients contained in insects is lacking, scientists study them in detail in cooperation with the Max Rubner Institute. Extrusion combined with the exploitation of new resources might open up new perspectives for the traditional baker trade and in particular for small companies, also as far as food trends are concerned. Collaboration with local business will allow for regional production and processing.

“Future research will concentrate on the applicability of the flours produced in the baking sector. External bread checks are to cover not only the shape and appearance, but also the texture of the bread. In addition, we plan surveys,” Emin reports and emphasizes that the results obtained will be important for the sustainable production of food containing insects.

The studies carried out by KIT researchers are part of the project “Functionalization of Insect-based Flours by Extrusion for the Preparation of Bakery Products.” The project started in 2019 is funded by the Federal Ministry of Food and Agriculture for a period of three years. Project partners are the Max Rubner Institute, the European Centre for Dispersion Technologies, and Störrmühle GmbH.