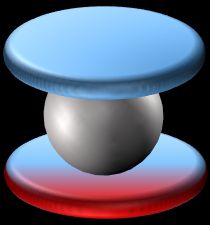 Schematic representation of a sandwich compound with a bottom ring composed of various elements. (Graphics: KIT)

Thanks to their special properties, rare earths are used in many high-tech products. Scientists of Karlsruhe Institute of Technology (KIT) are now working on new applications of these elements. The team produces so-called sandwich compounds based on rare earths, which might serve as novel molecular materials for more efficient storage media or displays in future. The German Research Foundation (DFG) funds this groundbreaking study with EUR 500,000 under a Reinhart Koselleck Project.

Sandwich compounds are chemical molecules, whose properties still are largely unknown. The compounds consist of two ring struc-tures, between which a single metal atom is “trapped.” Simply speaking, the compounds look like minute sandwiches. To study whether the molecules may serve as a basis of innovative future materials, Professor Peter Roesky, Head of the Chair for Inorganic Functional Materials of the Institute of Inorganic Chemistry (AOC), and his team produce different types of these sandwich complexes at the laboratory. As metal atoms in the center of the compounds, the scientists use various elements from the rare earths group. The test molecules also differ in their ring structures. The rings consist of carbon and a variable proportion of other elements. Experiments are carried out with different ring sizes. Within the project, the re-searchers plan to systematically vary the size and structure of the rings in order to derive a structure-effect relationship. “We will study the influence of the structure of the sandwich compounds on their physical properties,” Roesky explains. “In particular, we will focus on magnetism and luminescence of the molecules.”

So far, rare earths have usually been applied in solid materials used in high-tech products. The elements can be found in LED lamps, mobile displays, or magnets of wind turbines, to mention a few examples. Production of the molecular compounds from rare earths by Roesky is an approach that has hardly been considered so far.

In the ideal case, researchers might obtain molecules behaving like minute magnets. Such compounds are also referred to as single-molecule magnets. Some day, these novel complexes might be used to produce storage media of considerably increased storage capacity in case of the same physical dimension. Roesky and his team also test rare-earth elements already used in luminescent mate-rials. Sandwich compounds containing such elements might be used to produce optimized displays in future. “Our project serves to obtain basic understanding of these novel materials,” Roesky says.

As the project of the scientists is still at the very beginning of a new research field, success is not guaranteed. Within the framework of Reinhart Koselleck Projects, DFG specifically funds such higher-risk projects and gives researchers with a proven scientific track record the opportunity to implement innovative ideas. Across all disci-plines, only eight of such innovative ideas were funded within Rein-hart Koselleck Projects in Germany in 2019. Roesky is the first sci-entist of KIT to receive such funding. The funds scheduled for a duration of five years may be used freely.