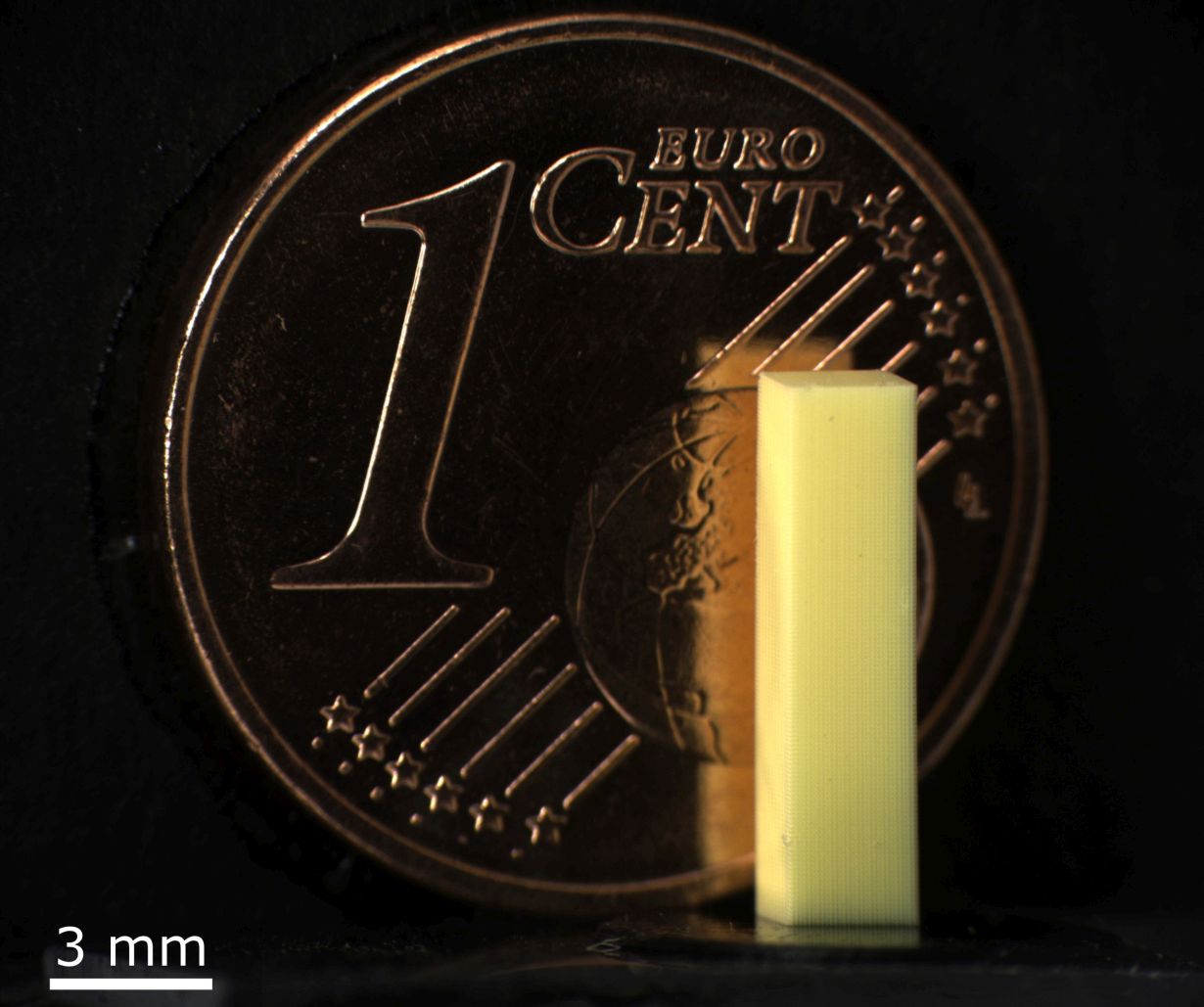 The metamaterial printed with the new system consists of a complex three-dimensional lattice structure on the micrometer scale. (Photo: Vincent Hahn, KIT)

3D printers working in the millimeter range and larger are increasingly used in industrial production processes. Many applications, however, require precise printing on the micrometer scale at a far higher speed. Researchers of Karlsruhe Institute of Technology (KIT) have now developed a system to print highly precise, centimeter-sized objects with submicrometer details at a so far unmatched speed. This system is presented in a special issue of Advanced Functional Materials (DOI: 10.1002/adfm.201907795).

To demonstrate not only the speed, but also the reliability of their setup, the researchers have printed a lattice structure of 60 cubic millimeters in size with details down to the micrometer scale. It contains more than 300 billion voxels (a voxel is the 3D counterpart of a pixel or 2D picture element). “We have by far outperformed the record reached by 3D-printed aircraft wings. This is a new world record,” says Professor Martin Wegener, Spokesperson of the Cluster of Excellence “3D Matter Made to Order” (3DMM2O), within which the system was developed.

For this type of 3D printing, the beam of a laser passes a liquid photoresist in a computer-controlled manner. The material located in the focus of the laser only is exposed and hardened. “The focal points correspond to the nozzles of an inkjet printer, the only difference being that they work three-dimensionally,” Vincent Hahn, first author of the publication, says. In this way, highly precise filigree structures can be produced for various applications, such as optics and photonics, material sciences, bioengineering, or safety engineering. Typically, several hundred thousands of voxels per second have been produced with a single laser light spot so far. This means that it was nearly a hundred times slower than graphical inkjet printers, which impeded many applications so far. Scientists of KIT and Queensland University of Technology (QUT) in Brisbane/Australia have now developed a new system within the 3DMM2O Cluster of Excellence. Using special optics, the laser beam is divided into nine partial beams that focus on a focal point each. All nine partial beams can be used in parallel and, thanks to improved electronic control, they can be moved precisely much more rapidly than ever. This and some other technical improvements made the researchers reach 3D printing speeds of about 10 million voxels per second, which corresponds to the speed reached by graphical 2D inkjet printers. KIT will continue research and development work in this area. “After all, 3D printers will be used to print not just one page, but thick volumes,” Hahn says. This will also require progress in chemistry. For example, more sensitive photoresists are needed to generate more focal points at the same laser output.

More about the KIT Center Materials in Technical and Life Sciences: www.materials.kit.edu/index.php