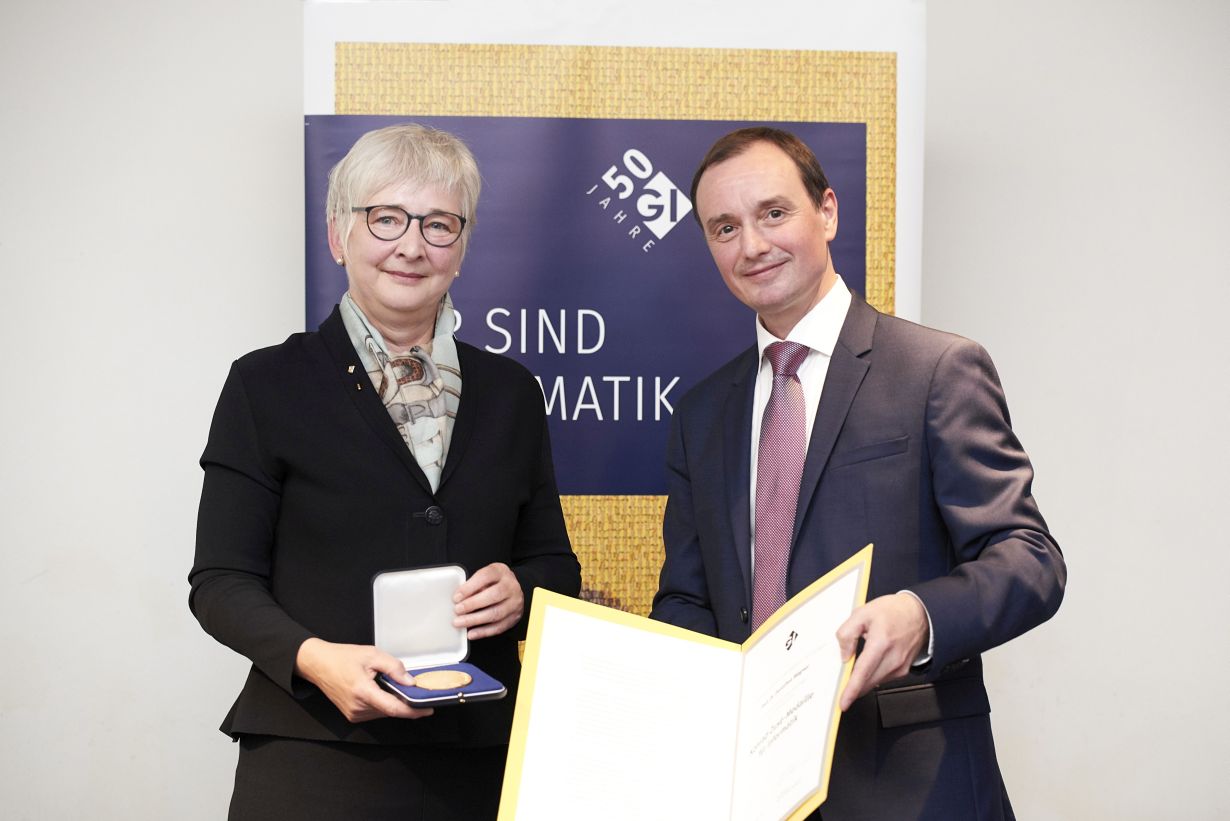 Dorothea Wagner’s research on automated route planning is applied daily all over the world. So far, the computer scientist of KIT has published more than 250 articles about algorithmics issues. The professor combines theoretical and practical approaches to optimize energy systems, among others. The Konrad Zuse Medal presented to Dorothea Wagner at the Annual Meeting of the German Informatics Society (GI) honors her as “an outstanding scientist, whose contributions to informatics research are at the leading edge worldwide.”

“At KIT, we are very happy about this honor for Dorothea Wagner, a renowned scientist, whose research in the area of informatics is trend-setting,” says the President of the KIT, Professor Holger Hanselka. “Apart from her outstanding contributions to her discipline, she is working in a number of bodies and has rendered great services to strengthen science. I would like to thank her cordially for this commitment.”

Dorothea Wagner was and is ahead of time: “When I started research on route planning and automated timetable information twenty years ago, it was still unclear when these options would be used,” she says. Today, they are part of everyday life in the world. Currently, the researcher is studying how algorithms for the efficient control of power grids may contribute to the success of the energy transition. Power supply from renewable energy sources is increasingly decentralized and power fed into the grid fluctuates depending on solar irradiation and wind intensity. Computerized methods will help extend the existing power grid and use it more efficiently to cope with these challenges. “But use of our methods still is a long way off,” the researcher says.

Wagner is the first woman to receive the Konrad Zuse Medal that has been awarded every two years since 1987. She considers this fact an important signal. “In spite of all efforts, we have unfortunately not yet succeeded in increasing the share of female students of informatics. As a rule, it is below 20%,” Wagner says. She chose informatics as a minor when she started to study mathematics in 1976. At that time, informatics just emerged as a subject at German universities. “It was always clear to everybody working in this discipline that the potential of informatics is growing,” says the scientist, who was conferred her doctorate by RWTH Aachen University and habilitated at TU Berlin with a topic in the area of informatics. Since 2003, the professor has been teaching and conducting research in Karlsruhe. Parallel to her work at KIT, she represents the interests of informatics in a number of bodies and science institutions.

Her scientific excellence “goes hand in hand with an exemplary voluntary commitment to informatics and science.” This is pointed out in the statement of the Informatics Society on the award of the Konrad Zuse Medal. Wagner advocated internationalization of her discipline and in 2018 received the Werner Heisenberg Medal of the Alexander von Humboldt Foundation for her merits in international scientific collaboration. At the Sino-German Center for Research Promotion of the German Research Foundation (DFG), Wagner supported scientific collaboration of both countries. “Science is international. From the very beginning, I was interested in contributing to the science system beyond my own discipline,” Wagner says, who was Vice President of the DFG from 2007 to 2014. Since 2015, she has been member and since 2019, Deputy Chairperson of the Scientific Commission of the Council of Science and Humanities that advises the federation and the states on science and research topics. In 2016, Wagner was elected member of acatech – the National Academy of Science and Engineering.

The computer scientist received a number of honors, including the Google Focused Research Award that was granted to her together with her KIT colleague Professor Peter Sanders and Professor Hannah Bast from Freiburg University in 2012. The Konrad Zuse Medal of the German Informatics Society is one of the highest awards for informatics in Germany. With about 20,000 personal and 250 corporate members, the Informatics Society is the largest and most important society for informatics in the German-speaking countries.