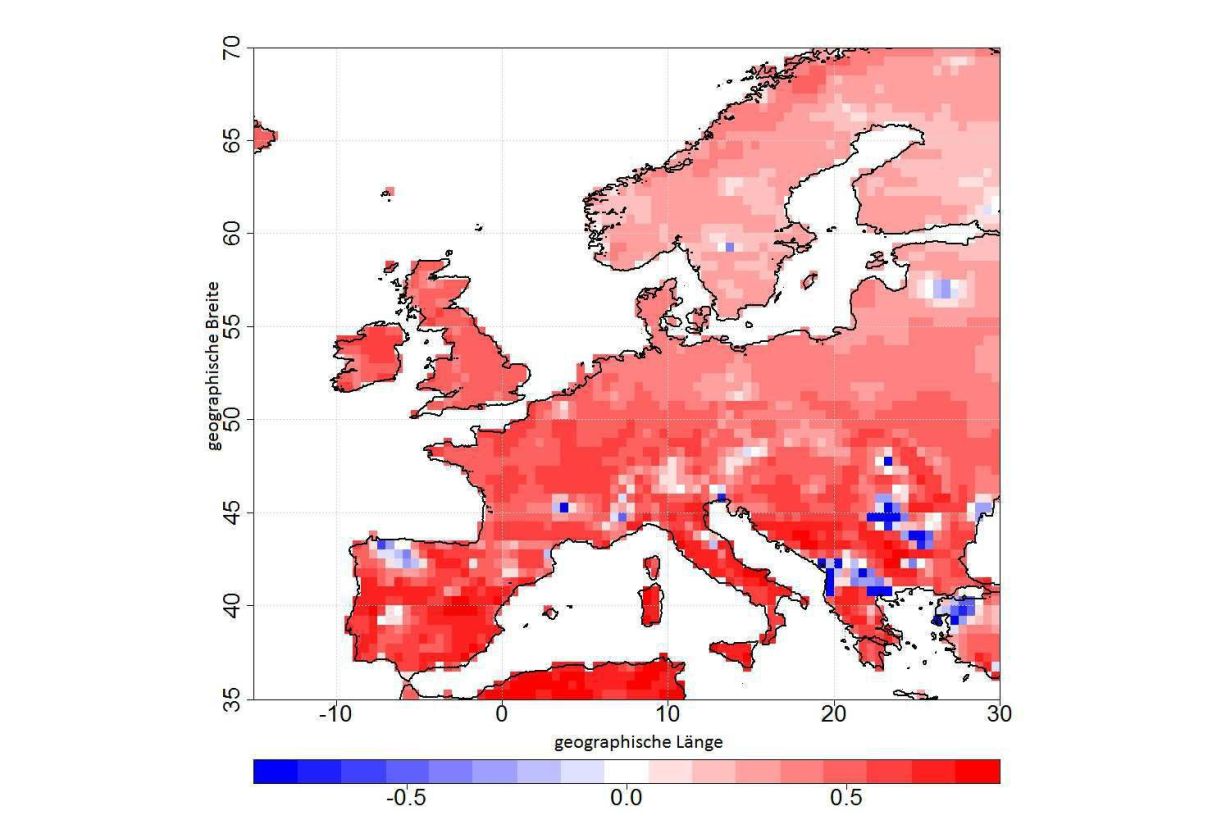 The new system can make regional climate prognoses for Europe and, for example, display the development of soil heating for up to ten years. (Figure: Hendrik Feldmann, KIT) ((geographische Breite/Länge = latitude/longitude))

Climate is changing: Droughts, floods, and extreme weather events influence agriculture, economy, and society. Improved adaptability of industry and society to the future climate, however, requires reliable statements on medium-term climate development, in particular for certain regions. Researchers of Karlsruhe Institute of Technology (KIT) and partners in the MiKlip project have now developed such a model that can be used to make more precise regional climate prognoses for Europe for a period of up to ten years.

What will the weather be like tomorrow or in the next two weeks? Prognoses of short-term changes of the atmosphere and seasonal forecasts are already made on a regular basis. Climate prognoses for a decade, by contrast, reflect tendencies for a medium term of up to ten years. Within the MiKlip (Medium-term Climate Prognosis) project, KIT and partners of the German Weather Service (DWD), Max Planck Institute for Meteorology (MPI-M), Hamburg, and other universities have developed a forecast system to calculate such climate prognoses of regional resolution, i.e. for regions of 25 km in dimension.

The global climate prognoses that are refined by COSMO-CLM are based on the global climate model ECHAM of the MPI and differ from long-term projections, such as the IPCC fifth assessment report, by considering as a starting condition the “memories” of various components of the climate system: Atmosphere, ocean, land or ice mass react to external impacts, such as carbon dioxide or temperature, at different rates. For example, the atmosphere stores heat for a few days only, whereas sea ice stores heat for one to two years, and the ocean for up to 100 years.

The COSMO-CLM model describes the state of the atmosphere in interaction with the land surface in Europe. A complex computer program divides the Earth’s surface into thousands of lattice boxes and with the help of mathematical equations and physical laws calculates e.g. the development of surface temperature over time for each box. Thanks to its mesh width of 25 km, COSMO-CLM can make prognoses of refined spatial and temporal resolution for e.g. Europe and derive user-relevant climate information. Regional models are subject to the same physical principles and equations as global models, but calculate clouds, wind flows, and precipitation in a much more detailed way. As a database, they also use more precise land surface data, as these may have different effects on the climate system depending on the region selected.

In studies for past periods, climate researchers tested the prognoses of this system. They found usable forecasts for Europe, in particular for parameters characterizing warming. According to prognoses based on current data, mean temperature in Europe may be expected to exceed the mean of the years from 1980 to 2010 by more than 1°C in the next ten years. Hence, this period will be the hottest one since the beginning of systematic measurements. Temperature anomaly above Europe will increase from West to East, with strongest heating taking place in Southeast Europe. Such prognoses of the development of the climate system can only be made, when initial conditions and physical laws governing the processes of nature are known in detail.