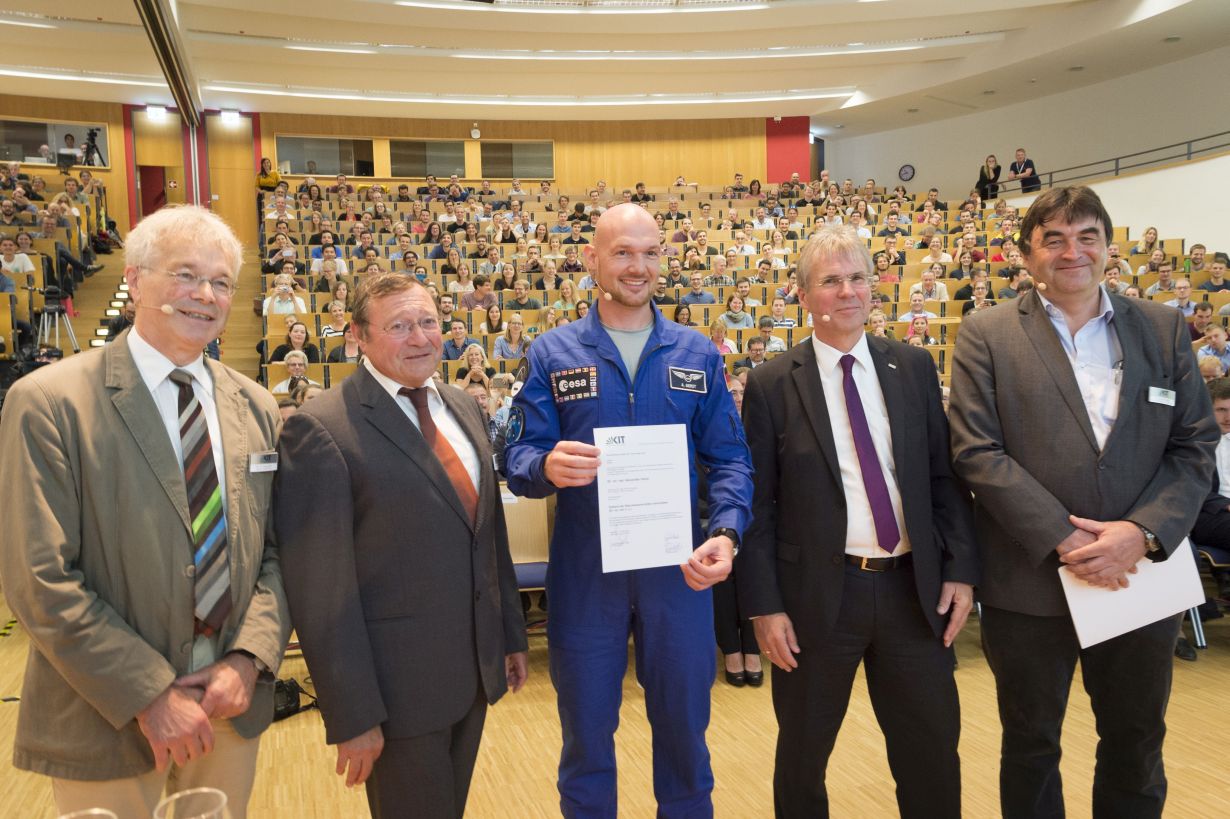 From space back to his scientific roots: ESA astronaut Alexander Gerst was conferred the honorary doctorate by the KIT Departments of Physics and Civil Engineering, Geo- and Environmental Sciences. (Photo: Markus Breig/KIT)

What does a thunderstorm look like above the clouds, how does the body change in zero gravity, and what can research on board of the ISS contribute to the treatment of diseases on Earth? Answers to questions like these were found by ESA astronaut Alexander Gerst during his two missions to the ISS International Space Station in 2014 and 2018. His scientific roots also lie in Karlsruhe. In 2003, he received his diploma in geophysics at the former Karlsruhe University, today’s Karlsruhe Institute of Technology (KIT). The KIT Departments of Physics and of Civil Engineering, Geo- and Environmental Sciences now granted the honorary doctorate to Gerst. For the ceremony and a presentation in the fully occupied Audimax, the German ESA astronaut returned to his former university. Photos of the event can be downloaded at fotoweb.

“We are very proud to see how successfully Alexander Gerst has made his way since he studied in Karlsruhe,” says the President of KIT, Professor Holger Hanselka. “He is both role model and motivation for our students and junior researchers, as well as for all of us when it comes to thinking across borders, to follow curiosity, and to develop solutions for pressing future challenges. I am very happy that he is here with us today.”

The ESA astronaut remembers his time spent in Karlsruhe in best memory. “It was here that I started my scientific career. I learned a lot, from which I still benefit today as a scientist and astronaut of the European Space Agency ESA,” says Dr. Alexander Gerst. “We are living in an increasingly complex world with increasingly scarce resources. During my missions, I was able to look at our Earth from outside and I could see how fragile it is.” To protect it, Gerst considers it very important to communicate his view to society: “In particular, students and scientists like those here at KIT play a decisive role – with their commitment and their projects, but also because they inform about their research and seek the dialog with citizens.”

“Research on the ISS opens up new methods and views for current research topics in a number of scientific disciplines. They range from evolutionary biology topics to materials sciences methods to fundamental issues of astrophysics and cosmology,” says Professor Georg Weiß, Dean of the KIT Department of Physics. 400 km above the Earth on board of the ISS, Gerst among others worked on methods to treat cancer and Parkinson’s, used a high-tech melting furnace and robot systems. Since 1998, astronauts have carried out a total of 2800 experiments from 107 countries on the space station. The German ESA astronaut shared his everyday life in space by publishing photos and videos on social media. “Alexander Gerst enthused many people worldwide not only for space research, but also for climate and environmental sciences. He gave fascinating insights into his space missions and, in his inimitable way, widened the horizon for the big challenges lying ahead of us,” says Professor Frank Schilling, Dean of the KIT Department of Civil Engineering, Geo- and Environmental Sciences.” Challenges that are addressed by many researchers and students at KIT with high commitment. We are very happy about this motivation boost by Dr. Alexander Gerst.”

Until he became the second European and first German commander on ISS, Alexander Gerst’s scientific career started with processes deep within the Earth. In his diploma thesis, he studied changes of stresses in the Earth’s crust under the Ruapehu volcano on New Zealand before and after an eruption. “Of course, it was impossible for me to predict that Alexander will go on a space mission twelve years later. However, I already realized that he always went a little bit further than actually needed for fulfilling his tasks. As if he was particularly curious about what was lying beyond his immediate horizon,” says his former supervisor Professor Friedemann Wenzel. “When I wrote my assessment of his excellent thesis, I thought that such a person would have become an explorer in the 18th or 19th century and would have explored the Earth’s unknown expanses. And this is what he actually does in a more modern way.”

The Earth and its processes and organisms always fascinated Gerst. “I always wanted to know how earthquakes or volcanos develop,” Gerst says. And he wants to share his experience with future generations in particular. “I am now in a position to inspire young people and in particular girls. I want to show to them the opportunities they have and how important it is to work in science and engineering.”