ROBDEKON, the Central Hub for the Development of Robots for Decontamination Tasks, Now Open – Contributions from Six KIT Professors 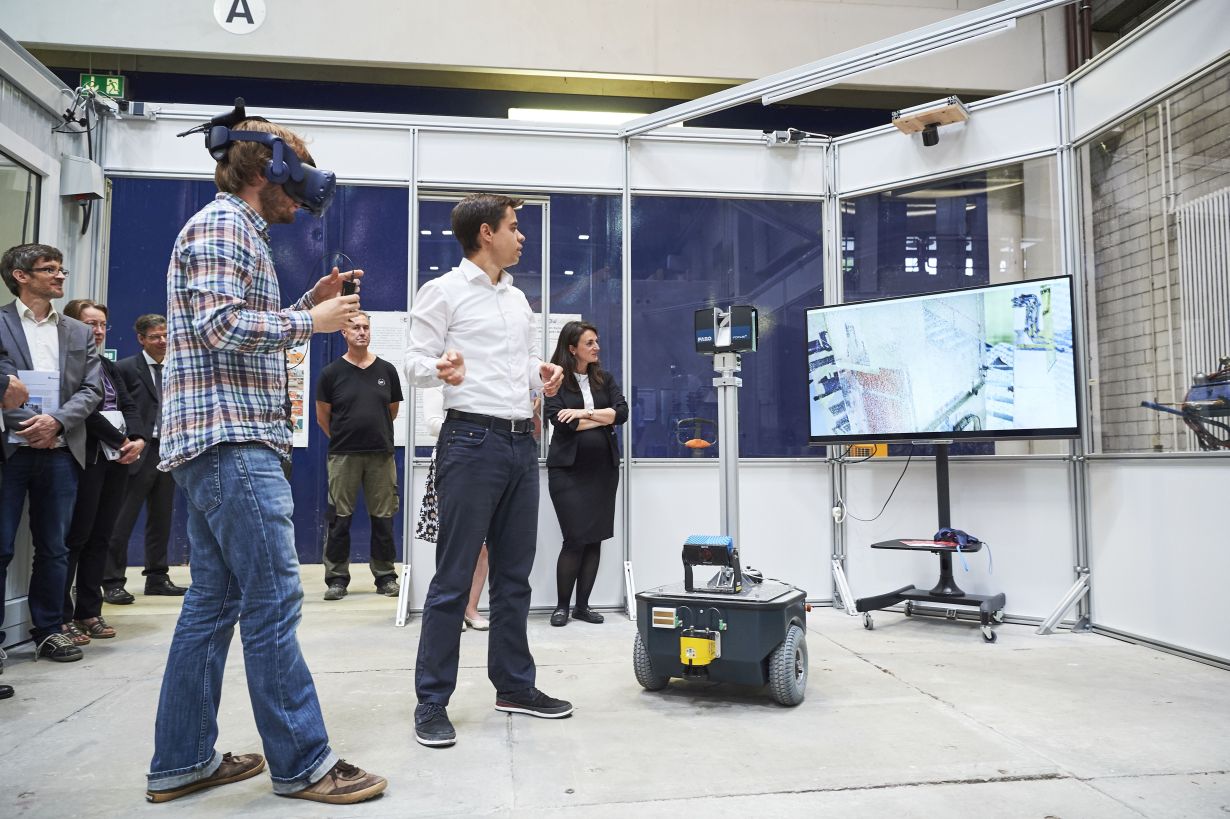 Cleaning up landfills, sorting toxic waste or decommissioning nuclear plants: these are tasks where people work in hazardous environments which require complex and often burdensome protective measures. The answer could be remote-controlled robots and autonomous machines. There is now a central hub in Karlsruhe for researching and testing the necessary technologies: the “ROBDEKON – robots for the decontamination in environments that are hazardous to humans” competence center sponsored by the Federal Ministry of Education and Research (BMBF).

A small digger digs a hole in a specified location. Nobody is sitting in the driver's cab; it’s controlled by a computer in an aluminum box on the roof. A futuristic vehicle – its four wheels suspended from moving structures reminiscent of spider legs – shows its different movement modes capable of handling pretty much any terrain. A humanoid robot independently picks up a system part from a collection of objects, looks at it from different angles, cleans it in a water bath and places it in a container. These and many other projects at ROBDEKON show the potential of robots when it comes to decontamination.

“ROBDEKON combines key experts in decontamination robotics and creates the basis for a sustainable cooperation for innovation transfer in practice,” says Dr. Andrea Detmer, Head of Civil Security Research at BMBF, during the opening of ROBDEKON and the inauguration of the new lab hall. “The competence center will become the heart for developments which, with the help of artificial intelligence, will generate very specific added value for people who are potentially exposed to health hazards in cleaning up landfills and contaminated sites. The aim is to relieve them of their hazardous work, minimizing dangers to life and limb.”

Günther Leßnerkraus, Head of the Department for Industry, Innovation, Economic Research and Digitalization at the Baden-Württemberg Ministry of Economics, says: “Artificial Intelligence is the key technology of the future – in virtually all aspects of our lives. The new ROBDEKON competence center is an excellent example of the numerous possibilities for using intelligent applications. Especially medium-sized companies will benefit from the technologies developed there.”

Karlsruhe’s mayor Dr. Frank Mentrup congratulated the four participating research institutions – including Fraunhofer IOSB, the institution in charge, Karlsruhe Institute of Technology (KIT), the FZI Research Center for Information Technology and the Robotics Innovation Center of the German Research Center for Artificial Intelligence (DFKI) in Bremen – on the successful launch: “ROBDEKON is one of only two research centers for robotic systems in environments that are hazardous to humans which are funded as part of the ‘Research for Civil Security’ BMBF program. This underlines the city of Karlsruhe’s special importance as a science and technology location and its reputation for future developments in dealing with robotic systems on a national level.”

Professor Jürgen Beyerer, Head of Fraunhofer IOSB, ROBDEKON spokesman and chairholder at KIT, explains the concept and the current status of the competence center: “Since the start of funding in 2018 we were able to build a unique research infrastructure which combines all the necessary technological skills and continues to develop them sustainably,” says Beyerer. Among the areas covered by the partners are robotics and hardware system development, aspects of artificial intelligence such as perception of the environment, orientation, motion planning, decision-making in uncertain situations, and man-machine interaction. Added to that is a good understanding of the application domains which the parties involved bring to the table.

As a central hub for all aspects of robotics for decontamination tasks, ROBDEKON is open to everyone who wants to get involved or work on their projects with the support of the center’s experts, as Beyerer went on to say: “We offer consulting services, are happy to cooperate with other research institutions and are looking for intensive dialogs with the relevant industry to come up with target-oriented and practical solutions. Our maxim is to use our combined expertise to create maximum benefit for society and the economy.”

A total of six professors from KIT contribute to ROBDEKON. In addition to the spokesman, Jürgen Beyerer, they include Rüdiger Dillmann, Sascha Gentes, Uwe Hanebeck, Björn Hein and Tamin Asfour who coordinates the KIT contributions. The projects they contribute include:

•    ARMAR-6: The humanoid robot developed at KIT has cognitive and motor skills which enable it to visually detect and grasp unknown objects in unstructured scenes and carry out certain operations. For example, it can clean contaminated system parts independently in a washroom and store them in a suitable place.

•    Augmented reality: Using local pollutant concentrations measured from landfill, pollutant distribution is reconstructed and then visualized as a 3D map with AR glasses.

•    Scanning robot: Using a lightweight robot with a 2D light section sensor, this prototype shows how even highly textured system parts can be captured with the right scanning strategy to measure radioactive power plant components, for example.

•    MAFRO: The climbing robot is conveyed to its place of application on a chain driven transport system. It is equipped with vacuum suction plates and is able to climb walls.

•    GammaBot: GammaBot features a differential drive. With its high-resolution 3D laser, digital images of the environment can be created with millimeter precision. Through the spatial data, additional information such as thermal images, gamma spectroscopies and ODL measurements are stored in different layers.

Photos of the exhibits and – from about 2 pm on June 25, 2019 – current press photos from the opening can be found at https://robdekon.de

ROBDEKON is one of two competence centers for robotic systems which BMBF has funded as part of the “Research for Civil Security” program since 2018. The center is coordinated by the Fraunhofer Institute of Optronics, System Technologies and Image Exploitation IOSB in Karlsruhe. Research partners are Karlsruhe Institute of Technology (KIT), the FZI Research Center for Information Technology in Karlsruhe and the German Research Center for Artificial Intelligence (DFKI). Götting KG, Kraftanlagen Heidelberg GmbH, ICP Ingenieursgesellschaft Prof. Czurda und Partner mbH and KHG Kerntechnische Hilfsdienst GmbH are participating as industrial partners. It will initially run for four years. The aim is for the competence center to exist long-term and to act as an expert and user network for new decontamination technologies using robots. https://robdekon.de