Atmosphere Research in the Permanent Ice 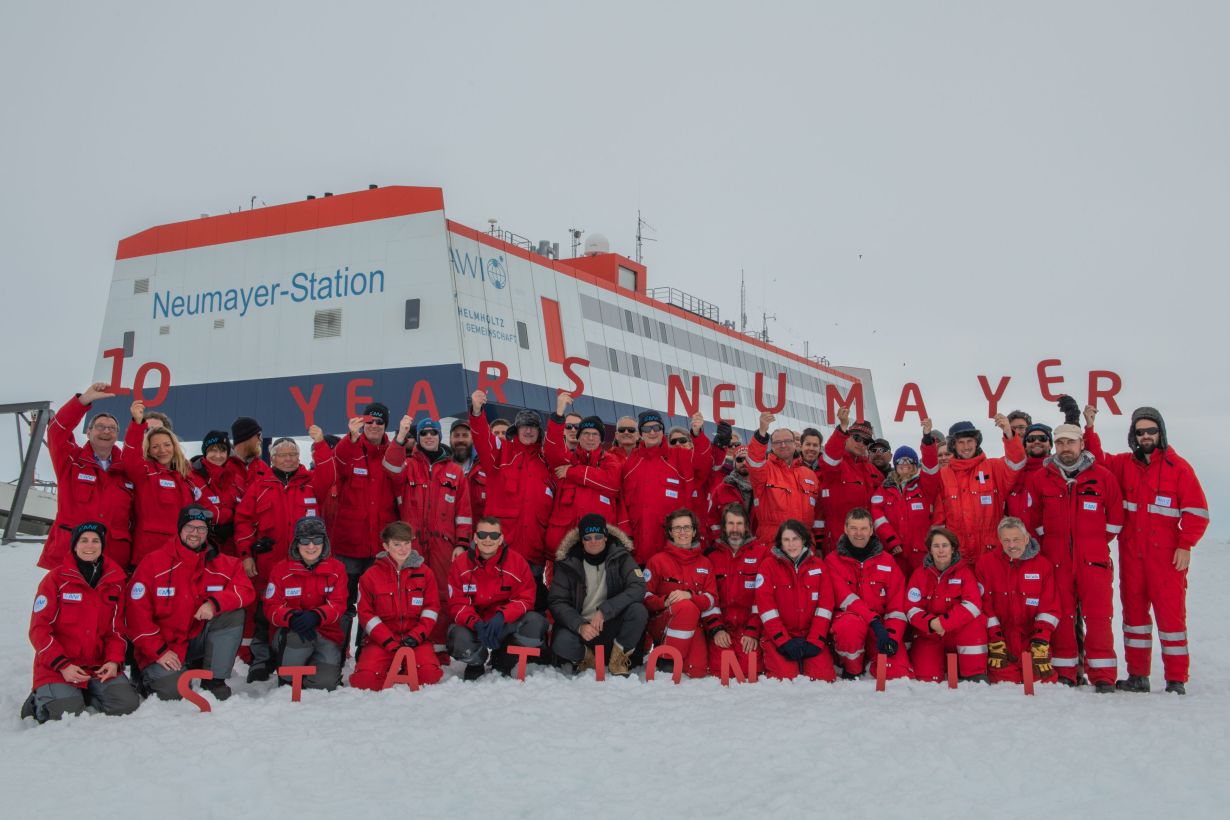 Happy Birthday, Neumayer Station III: The station in Antarctica has been in operation for 10 years. (Photo: Ester Horvarth; a detailed caption is available at the end of the text)

Ice and snow as far as the eye can see and temperatures down to -50°C: At a distance of about 2,000 km from the South Pole, Neumayer Station III is located, the center of German Antarctic research. In these days, the station crew is celebrating its 10th anniversary together with a German delegation from science and politics. Among the members is the President of Karlsruhe Institute of Technology (KIT), Professor Holger Hanselka. In summer 2019, KIT’s climate researchers will install a measurement instrument at the station to further study the atmosphere above the South Pole.

Although the icy conditions of the Antarctic do not allow human beings to live there, this area is highly important to us: Water masses of the Antarctic Ocean store most of the atmosphere’s carbon dioxide and produce the oxygen we breathe. The interest in processes and developments in the Antarctic region is accordingly high. For this purpose, Neumayer Station III was taken into operation in 2009 by the Alfred Wegener Institute – Helmholtz Centre for Polar and Marine Research (AWI).

The delegation visiting the station is headed by the Parliamentary State Secretary of the Federal Ministry of Education and Research, Dr. Michael Meister. Together with Professor Otmar Wiestler, President of the Helmholtz Association, and AWI Director, Professor Antje Boetius, Professor Holger Hanselka, President of KIT, joined the delegation. “For more than ten years now, researchers of the Helmholtz Association have studied climate and life in Antarctica at Neumayer Station III. Developments and processes taking place here have global effects. Only when the scientific community cooperates can we understand the processes in the Antarctic and derive concrete recommendations for actions to fight climate change,” Hanselka says. “I am very happy that KIT’s climate and environmental researchers contribute their expertise in atmosphere research and thus conduce important findings about Antarctica. From summer, KIT will operate an instrument to measure greenhouse gases above the Antarctic at Neumayer Station III.”

Focus on the Atmosphere: Climate Research of KIT in the Antarctic

The novel, compact spectrometer used for this purpose is far smaller than commonly applied instruments. But thanks to new technologies, it supplies results of the same precision. “We can capture the complete carbon cycle, from local emissions to transport to the sinks,” says Professor Johannes Orphal, Head of the Atmospheric Trace Gases and Remote Sensing Division of KIT’s Institute of Meteorology and Climate Research (IMK-ASF). The researchers have already tested their instrument under polar conditions in the Arctic without any problems. The spectrometer was developed within the “CoCCoN” network. This global network coordinated by IMK-ASF for monitoring greenhouse gases in the atmosphere will now be extended by another station. In addition, the KIT-coordinated measurement campaign “SouthTRAC” with the German research aircraft HALO will be conducted in the Antarctic from September to October 2019. Together with Forschungszentrum Jülich (FZJ) and the German Aerospace Center (DLR), KIT scientists will study the effects of climate change on the lower and middle atmosphere above the Antarctic. A comparable measurement campaign was organized by IMK-ASF in winter 2015/16 above the Arctic.

Another central element of atmosphere research is AtmoSat. KIT and FZJ jointly developed this satellite project that uses a novel infrared remote sensing technology to illustrate impacts of the middle atmosphere on global and regional climate. “From the data, we can derive three-dimensional distributions of the most important trace gases, such as ozone, methane, and water vapor,” Johannes Orphal says. AWI is among the scientific partners of this project. “The installation of our spectrometer at Neumayer Station III this summer will be another important step in KIT’s and AWI’s successful polar and atmosphere research,” Orphal emphasizes.

Since 2009, Neumayer Station III has been operated by AWI on the Ekström ice shelf on the eastern coast of the Weddell Sea. Under the extreme conditions of the Antarctic, researchers execute unique measurement series throughout the year. Research focuses on the composition of the atmosphere, the magnetic field of the Earth, and on developments of sea ice as well as on Antarctic diversity of species, such as penguin colonies or cold water corals below the ice shelf. Neumayer Station III is the largest and most comfortable station in the history of German Antarctic research. During the summer months, up to 50 persons can conduct research here. Construction of the station meets highest environmental protection standards. The energy produced remains in a closed system and is used again for the operation of the station. In this way, the traces left by the researchers in the Antarctic remain small and the region is optimally protected.

The photo can be downloaded at https://www.awi.de/ueber-uns/service/presse-detailansicht/presse/10-jahre-neumayer-station-iii.html.