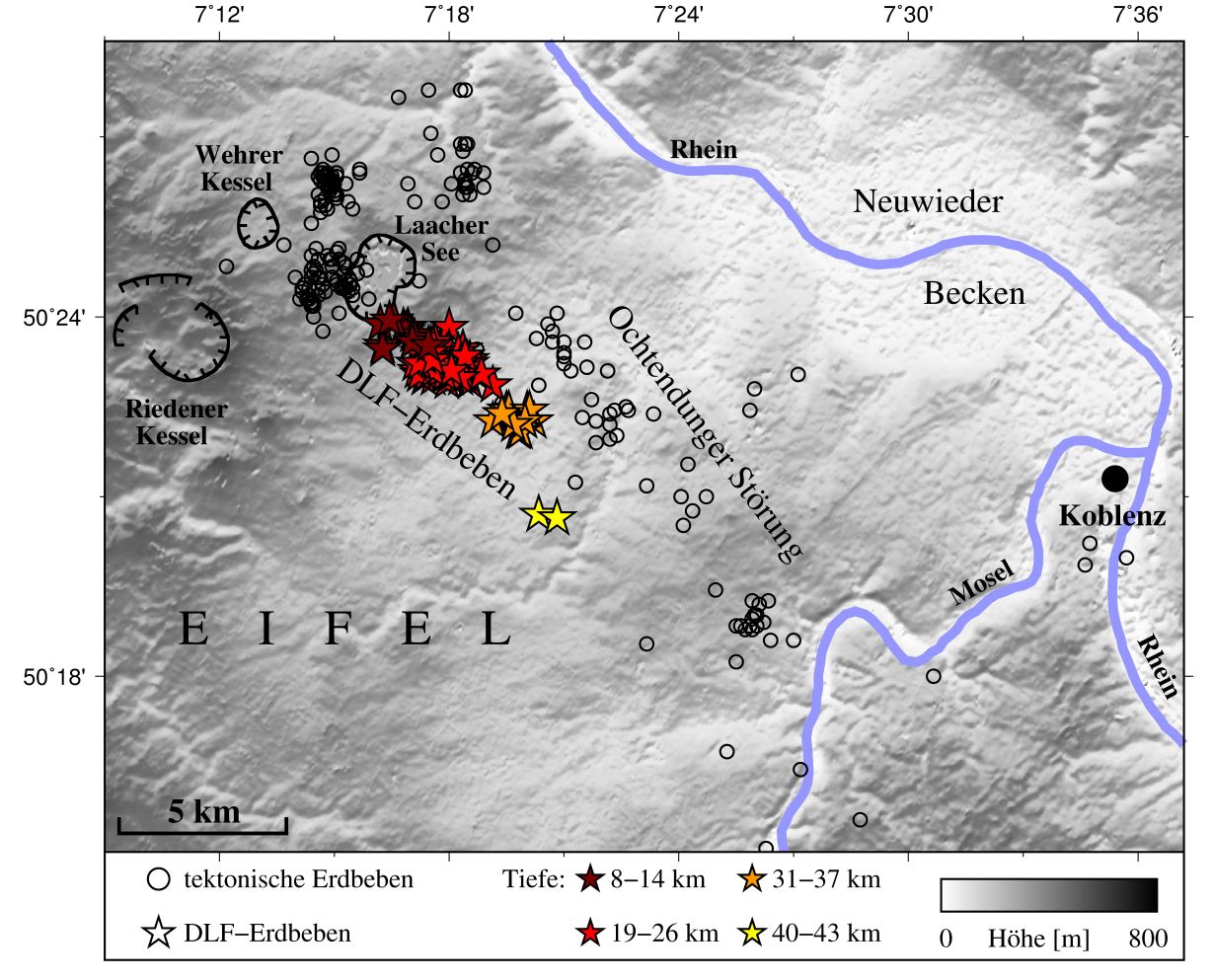 Seismicity Laacher See: Deep and low-frequency earthquakes (DLF) are shown as stars in different colors depending on their depth. (Fig.: Hensch et al.)

Magma could rise from the upper mantle into the middle and upper crust beneath the Laacher See Volcano (Rhineland-Palatinate).  This is the result of a study conducted by the Seismological Survey of Southwest Germany (Erdbebendienst Südwest), together with GFZ German Research Centre for Geosciences, Karlsruhe Institute of Technology (KIT) and the Seismological Survey of North Rhine-Westphalia. For the first time, the scientists present evidence of deep and low-frequency earthquakes caused by magma movements under the Laacher See Volcano. However, there are presently no signs of any upcoming volcanic activity in the near future. The researchers report their findings in Geophysical Journal International (DOI: 10.1093/gji/ggy532).

“The detected earthquakes are generated at large depths and are characterized by unusually low frequencies. Their magnitudes are below the limit of human perception,” explains Professor Joachim Ritter of the Geophysical Institute (GPI) at KIT. The scientists speak of “deep low-frequency” (DLF) earthquakes. They are generated at depths between ten and over forty kilometres, i.e. in the Earth's crust and upper mantle. Their dominant oscillation frequencies are between one and ten Hertz, which is significantly lower than tectonic earthquakes of comparable magnitude.

“DLF earthquakes are regarded worldwide as an indication of the movement of magmatic fluids at great depths,” explains Professor Torsten Dahm, head of the GFZ section Physics of Earthquakes and Volcanoes. “Such earthquakes can be observed regularly beneath active volcanoes, for example in Iceland, Japan or Kamchatka.” The results of the study in the East Eifel region suggest that magmatic fluids from the upper mantle of the Earth could rise into the Earth's crust under the Laacher See Volcano. This can be interpreted as an indication for the existence and ongoing slow recharge of magma chambers in the crust beneath the volcano.

In their study, the scientists of KIT, GFZ, Erdbebendienst Südwest – the joint seismological services of Rhineland-Palatinate and Baden-Württemberg – and the State Seismological Service of North Rhine-Westphalia determined that these earthquakes occur episodically in groups that are narrowly limited in time and space and line up along a line between 10 and 45 kilometres depth The scientists conclude that fluids and magmas, i.e. molten rock, could rise from the upper mantle into the middle and upper crust of the Earth beneath the Laacher See Volcano.

“Thanks to the extensive improvement of the seismological monitoring networks in Rhineland-Palatinate and the adjacent regions, deep low-frequency earthquakes could be recorded beneath the Laacher See Volcano for the first time in 2013,” says Dr. Martin Hensch, head of the study at the Erdbebendienst Südwest. “In the past five years, a total of four spatially well constrained clusters of such DLF earthquakes have been detected in the East Eifel region.” The clusters align along an approximately 80° southeast dipping line south of the Laacher See Volcano. In addition to the spatial separation, the temporal occurrence of the DLF earthquakes is also sharply limited: So far, the experts have observed eight episodes of DLF earthquakes lasting between 40 seconds and eight minutes.

However, the researchers do not interpret the observed DLF earthquakes as an immediate precursor signal of any upcoming volcanic activity in the near future. “The rise of magma into the shallow crust is usually accompanied by swarms of high-frequency earthquakes. Such activity has not yet been observed in the Eastern Eifel,” reports Joachim Ritter. “Further, there is no sign of deformation at the Earth's surface, which should be clearly detectable during massive magma ascents,” adds Torsten Dahm. Dating of the magma produced during the last eruption 12,900 years ago show that the filling and differentiation of the upper magma chamber under Laacher See Volcano could have taken about 30,000 years before the actual eruption took place. This means that the magmatic processes take an extremely long time before an eruption occurs. As the technical requirements for the detection and localization of DLF earthquakes in the East Eifel region have only reached a sufficient quality in the last few years, it is not possible to determine retrospectively since when DLF earthquakes have occurred in the region. It can be assumed that this was already the case before 2013. Following the first observation of deep earthquakes in 2013, KIT, GFZ and Erdbebendienst Südwest installed a seismological research network. The joint use of seismic recordings now allows a detailed scientific analysis of microseismicity.

In order to better investigate the interrelation of DLF earthquakes and possible magmatic activity beneath the East Eifel region, the researchers recommend to intensify geochemical monitoring to analyse emitted gases, as well as repeated geodetic measurements to detect possible deformations of the Earth's surface. Specific geophysical investigations should also be conducted to map and characterize possible magma reservoirs under the Laacher See Volcano. Further, the scientists advise a reassessment of the volcanic hazard of the Eifel.

Facts and background information (in German only):

The paper is available online in the Geophysical Journal International: