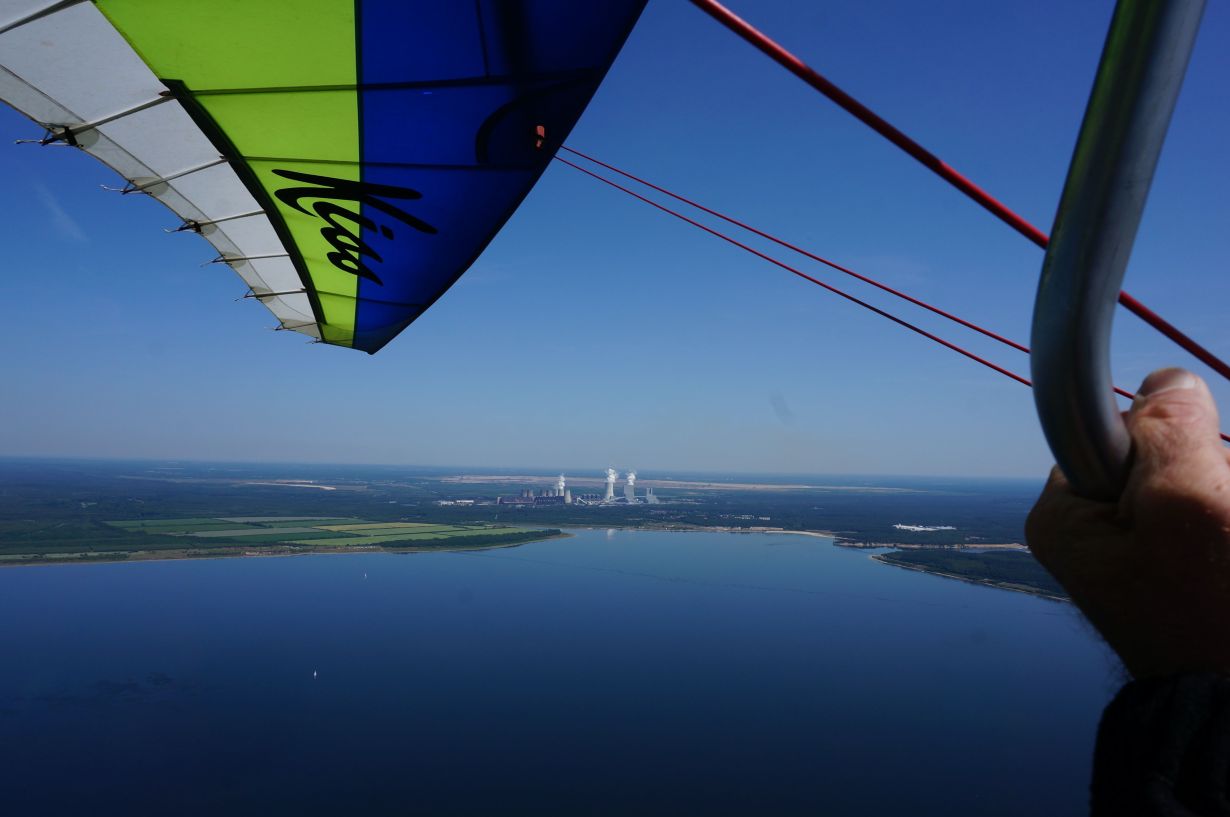 Boxberg coal-fired power plant in Lusatia: In the plume 20 km away, researchers measured up to 85,000 particles per cm³. (Photo: Wolfgang Junkermann, KIT)

Ultrafine particles affect both health and climate. In urban areas, road traffic is considered to be the main source of the small particles. However, a long-term measurement campaign of researchers of Karlsruhe Institute of Technology (KIT) outside of cities has now revealed a source that particularly affects regional climate: modern coal-fired power plants. In the Bulletin of the American Meteorological Society, the researchers report how the power plants’ emissions influence the formation of ultrafine particles and which impact these particles have on climate (doi:10.1175/BAMS-D-18-0075.1).

Although ultrafine particles (UFP) have a diameter of less than 100 nm, they have an enormous impact on environmental processes: “They offer surfaces for chemical reactions in the atmosphere or may influence the properties of clouds and precipitation as condensation nuclei,” says Wolfgang Junkermann of KIT’s Institute of Meteorology and Climate Research (IMK). To study the existence and distributions of UFP, the environmental physicist, together with Australian colleagues, made measurement flights all around the globe in the past fifteen years. Measurements also covered the atmosphere outside of urban hotspots, in particular regions with conspicuous precipitation trends. In open nature, for instance, forest fires, dust storms or volcano eruptions produce fine particles, but mostly not in the nanometer range. The climate researchers found that UFP concentrations also increase constantly in many remote areas and that the new, additional particles are of no natural origin.

In the course of his measurement flights, Junkermann found that these particles are emitted by coal-fired power plants and refineries. “Exhaust gas cleaning takes place under conditions that are optimal for the new formation of particles. Ammonia is added to the exhaust gases in order to convert nitrogen oxides into harmless water and nitrogen.” As this ammonia is available in the right mixing ratio for particle formation, concentrations in the exhaust gas are extremely high. After emission at 200 – 300 m height, the very small particles can spread over several hundreds of kilometers depending on weather and climate conditions in the atmosphere: “Meteorological processes play an important role for the temporal and spatial patterns of UFP,” Junkermann says. During the night, plumes may disperse in a thin, highly concentrated layer. “Near the ground, the bottom layer is cooled down, while warmer air remains above.” This stable stratification (inversion) can be broken up by sunshine-induced warming on the next morning only. Then, particles are mixed again down to the ground surface. There, concentrations may increase by up to two orders of magnitude for a short term. “This results in veritable explosions, so-called particle events,” the researcher explains.

If these particles enter the clouds as condensation nuclei, the individual cloud droplets will initially become smaller and it takes longer for a raindrop to form. Consequently, the spatial and temporal distribution and intensity of precipitation are influenced. “This does not necessarily result in less rainfall, particles may even intensify extreme rain events. The wind determines where this happens.”

For the measurement flights, the climate researchers used the KIT-developed smallest manned research aircraft worldwide. The flying laboratory is equipped with highly sensitive instruments and sensors measuring dust particles, trace gases, temperature, humidity, wind, and energy balances. Junkermann and his colleagues then compared these data with meteorological observations and dispersion and transport models. “In this way, we found that fossil power plants have meanwhile become the strongest individual sources of ultrafine particles worldwide. They massively influence meteorological processes and may cause extreme weather events.”