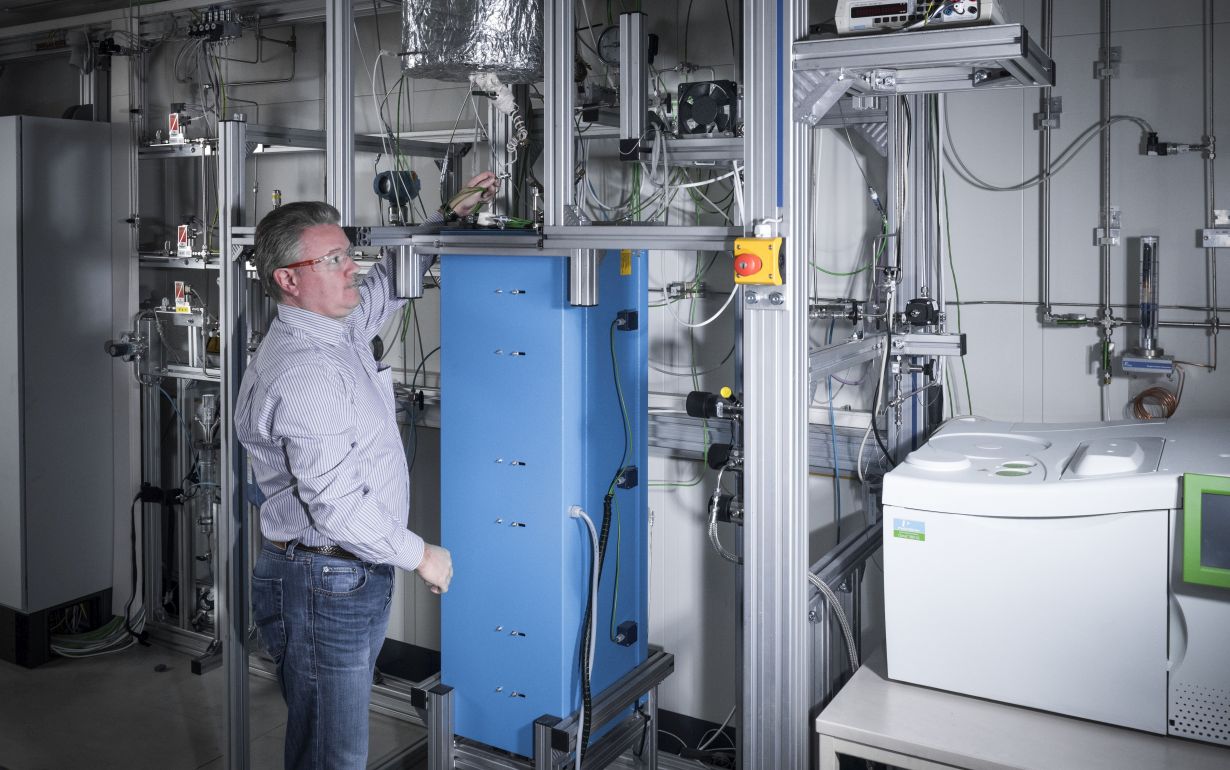 The experimental reactor for methane cracking is part of the liquid metal laboratory at KIT (detailed caption at the end of the text; Photo: Amadeus Bramsiepe, KIT)

Generating energy from natural gas without climate-damaging CO2 emissions – that’s the promise of a new technology developed in a joint research project by scientists at Karlsruhe Institute of Technology (KIT) and the Institute for Advanced Sustainability Studies (IASS) in Potsdam. Natural gas, which mainly consists of methane, is converted into hydrogen and fixed carbon. For their work, the researchers have now received the German Gas Industry Innovation Award. KIT was also honored with a new special award for the most innovative startup which was presented to Ineratec, a spin-off of the research university.

“The German Gas Industry Innovation Award for the new methane cracking process is testament to the innovative spirit of our scientists,” says the President of KIT, Professor Holger Hanselka.

“The option of using fossil natural gas in a climate-friendly way in the future can make a major contribution to curb CO2 emissions. I am very pleased that we, as the research university in the Helmholtz Association, can make this important contribution to climate protection together with our partners.” The award was presented to the research team consisting of scientists from KIT and IASS on November 22 in Berlin. The research team also won an additional award voted for by the attendees at the ceremony. The event was held under the auspices of the Federal Minister of Education and Research, Anja Karliczek.

The new process makes it possible to use natural gas in a climate-friendly manner. “Instead of directly burning natural gas, which mainly consists of methane, we break it up into its components hydrogen and carbon,” says Dr Stefan Stückrad who has co-managed the research project at IASS. The hydrogen produced in methane cracking can be used as an energy source in fuel cell vehicles as well as for generating electricity and heat. Applications in the chemical industry are also possible. “So far, hydrogen for the chemical industry has mainly been produced from natural gas by steam methane reforming. During this process, considerable amounts of carbon dioxide are released,” says Stückrad. In addition to hydrogen, very pure powdery carbon is created as a by-product during cracking, the importance of which is constantly increasing as an industrial raw material. For example, it is used in the production of elastomers, lightweight materials, printing inks and batteries.

Methane cracking is not a new idea as such and has previously been analyzed in experiments with gas phase reactors. “Conventional methods proved unsuitable for application at an industrial scale, though,” says Professor Thomas Wetzel from the Institute of Thermal Process Engineering (TVT) at KIT. “The carbon produced during cracking was deposited on the heated reactor walls as a solid layer, blocking the reactors in a short space of time. Other approaches on the basis of arc- or plasma-based reactors weren’t very successful either.” The research project from IASS and KIT has therefore chosen a fundamentally different approach for continuous pyrolytic methane cracking. The basic idea is to use molten tin as a heat transfer and liquid medium in a bubble column reactor. Here, KIT scientists have applied their expertise in liquid metal research and technology. In the Innovation Award winning process, methane gas is continuously fed into a liquid metal column from the bottom, which is kept at a temperature of up to 1,200 degrees Celsius, and rises as a bubble swarm. The gas in the bubbles very quickly reaches the reaction temperature so that pyrolysis reaction takes place. “The bubbles open up on the surface of the liquid tin and release the gaseous hydrogen and carbon,” says Wetzel. “The carbon occurs as micro-granular powder that is easy to separate from the gas stream and easy to handle.”

The new technology is now for the first time enabling continuous operation of a reactor for methane cracking. A conversion rate as high as 78 percent has been proven on a laboratory scale. The groups of scientists are currently working on further optimizing and scaling the process to pilot level.

Nobel Prize winner Professor Carlo Rubbia, who is also the former scientific director of IASS, has initiated the research project on methane cracking. The project has been coordinated at IASS by Dr Stefan Stückrad and Professor Alberto Abánades. At KIT, researchers from the Karlsruhe Liquid Metal Laboratory (KALLA), the Institute for Pulsed Power and Microwave Technology (IHM) as well as the Institute for Applied Materials (IAM) have been participating in the project. Here the work has been coordinated by Professor Thomas Wetzel from the Institute of Thermal Process Engineering (TVT), Dr Leonid Stoppel (KALLA) and Dr Alfons Weisenburger (HIM).

Producing synthetic fuels from renewable energy sources inexpensively is also an important element for the energy transformation. Huge systems are required to produce synthetic gasoline, kerosene, diesel and natural gas. Ineratec, a KIT spin-off, builds chemical reactors that are so compact that the assembled system fits in a shipping container and can be used anywhere. At the 2018 German Gas Industry Innovation Award ceremony the young company was honored with a special award for the most innovative startup.

Every two years, the associations of the German gas industry present the German Gas Industry Innovation Award organized by the Association for the Efficient and Environmentally Friendly Use of Energy (ASUE). Award partners of ASUE are the German Technical and Scientific Association for Gas and Water (DVGW), the Association of the German Energy and Water Industry (BDEW) as well as the Zukunft Erdgas industry initiative. The awards are presented in four categories; the project from KIT and IASS on methane cracking was a winner in the “Research & Development” category. INERATEC was honored with a new special award for innovative startups.

Detailed caption: The experimental reactor for methane cracking is a 1.2-meter-high device made from quartz and stainless steel which contains molten tin. In the reactor, cracking takes place in methane bubbles as they rise up. The reactor is part of KALLA (KArlsruhe Liquid Metal LAboratory) where various technologies for the use of liquid metals are developed. (Photo: Amadeus Bramsiepe, KIT)