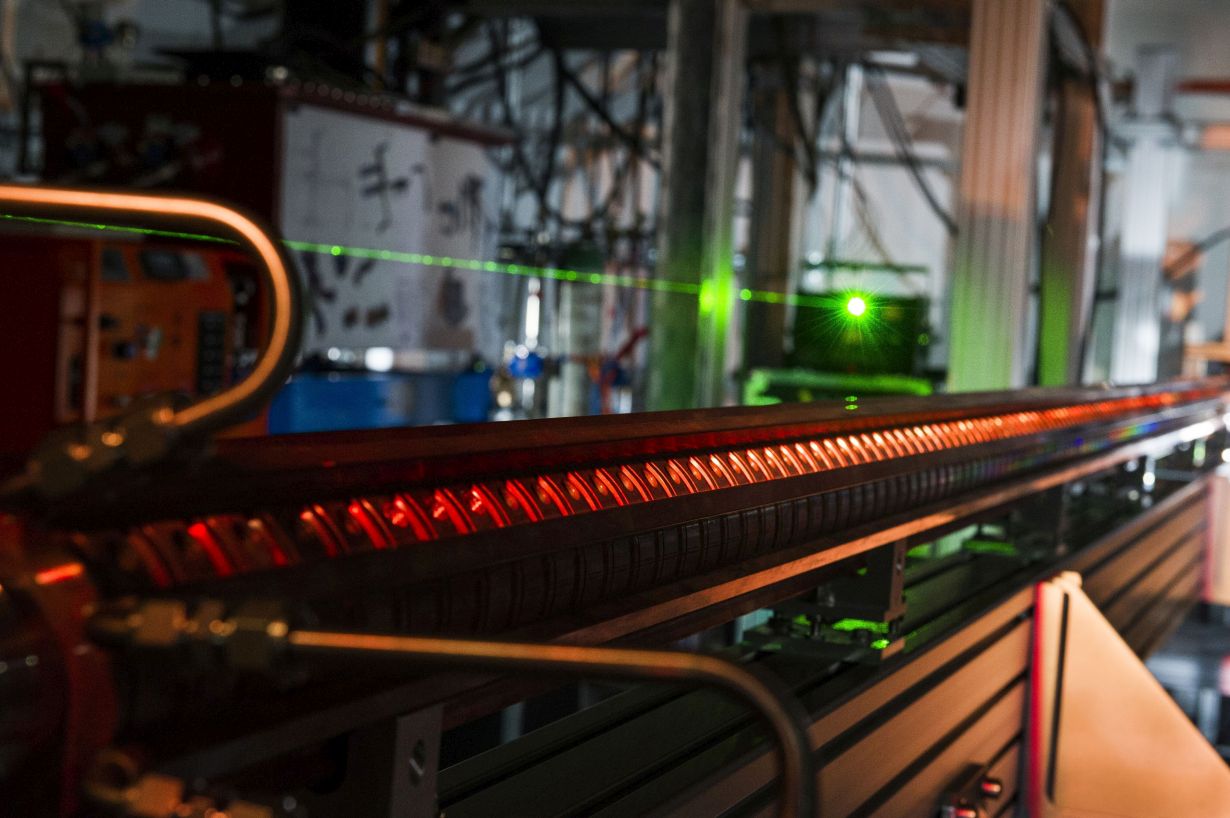 The FLUTE linear accelerator is an example of the compact and flexible accelerator systems at KIT. (Photo: Markus Breig, KIT)

Developing innovative, compact particle accelerators for applications in science and medical research is the aim of the new “Accelerator Technology HElmholtz iNfrAstructure” (ATHENA) research and development platform for accelerator technologies. The platform is a collaboration of six Helmholtz centers, including Karlsruhe Institute of Technology (KIT). The Helmholtz Association is funding the project as a strategic development measure with 29.99 million euros.

The largest and most well-known particle accelerator in the world is the 27-kilometer Large Hadron Collider located at CERN in Switzerland. Scientists are using it to research the structure of matter. In addition to their major importance for fundamental research in physics, accelerators also open up many other areas of application – from production technology to medical applications, for example in tumor therapy and diagnostics. However, today's accelerators are costly when it comes to their setup and operation. If powerful accelerators were considerably smaller, this technology could be used much more often. Therefore, another aim of researchers at KIT is to technically enable initial applications of ultra-compact accelerator systems in material and life sciences. To work on this, KIT will receive funding of 4.5 million euros from the new ATHENA research and development platform for accelerator technologies. “ATHENA provides access to plasma-based accelerators for the Karlsruhe scientists. That’s ideal for accelerator research at KIT where we are pursuing the goal of developing this technology on a broad basis for society,” says the President of KIT, Professor Holger Hanselka.

And the leading accelerator physicist at KIT, Professor Anke-Susanne Müller, thinks that in particular the storage of ultrashort electron bunches in a specially designed electron storage ring is an outstanding application of this new technology. They allow usable light pulse rates to be increased by a factor of one million for applications of terahertz radiation in healthcare and material sciences. What’s more, this process saves energy because the stored electrons can be used longer. “When it comes to diagnosing accelerator signals with a high repeat rate, we regularly push the boundaries of what is physically and technically feasible. We are already supporting our partners in the Helmholtz Association with our technologies, and in the future will also do so within ATHENA,” says Dr Erik Bründermann, project manager of the ATHENA sub-project at KIT.

The FLUTE linear accelerator, which was put into operation in Karlsruhe in July 2017, measures just under 12 meters and is a good example of the compact and flexible accelerators at KIT. But the aim is to reduce the acceleration path in the future even further, shrinking it to a few centimeters.

Coordinated by the Deutsches Elektronen-Synchrotron (DESY), the Helmholtz centers participating in ATHENA also aim to set up two German lighthouse projects for accelerator research on the basis of innovative plasma-based particle accelerators and state-of-the-art laser technology: an electron accelerator at DESY in Hamburg and a hadron accelerator at the Dresden-Rossendorf Helmholtz Center (HZDR). Both accelerators will be used to develop different applications ranging from a compact free-electron laser and innovative medical applications to new application options in nuclear and particle physics. As soon as maturity of use has been achieved in one area, new compact systems could be set up in other Helmholtz centers, and in universities and hospitals.

The work carried out within ATHENA is closely embedded in the European research landscape thanks to the EU-funded EuPRAXIA design study with its 40 partner institutes, which is also coordinated by DESY. This means that ATHENA, the top German research project, has also had a clear European perspective and direction from the very beginning.