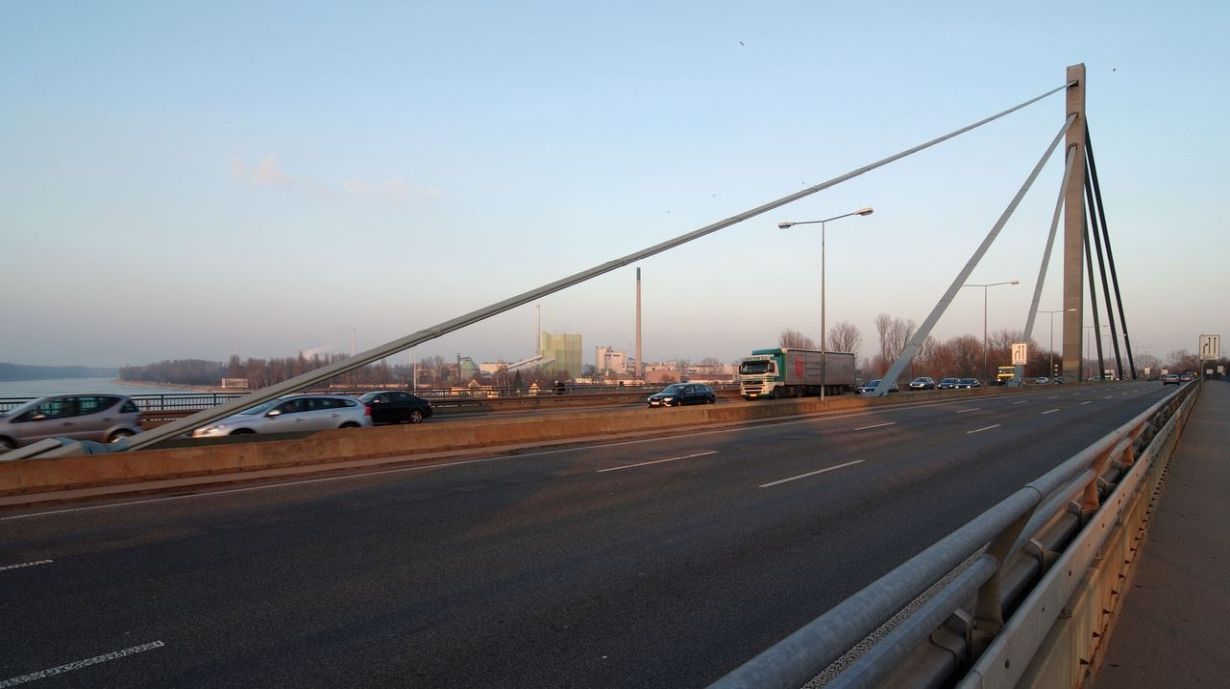 The Maxau Rhine Bridge is currently causing drivers a lot of stress and especially waiting times around Karlsruhe. It is the only crossing within a radius of 25 kilometers, connecting Baden-Württemberg and Rhineland-Palatinate. As a result, traffic is heavy: more than 80,000 vehicles cross the Rhine here every day. This load has badly affected the bridge. Repairs are starting in early November to upgrade it. A team of engineers of Karlsruhe Institute of Technology (KIT) is scientifically supporting the measures commissioned by the Karlsruhe authorities.

Since 1966, the 292-meter long cable-stayed bridge has been taking cars across the Rhine, connecting Karlsruhe to Wörth. While 50 years ago approximately 18,000 vehicles were expected per day, today's traffic counting station “Rheinbrücke Wörth” clocks about 80,000 vehicles daily. “Ever increasing axle loads in vehicles and the high number of crossings have left their marks on the structure,” says Professor Thomas Unmenhofer, Director of the Research Center for Steel, Timber and Masonry at KIT (VAKA). “Component and weld fatigue can result in cracks,” adds Dr Daniel C. Ruff, Managing Director of VAKA. Especially problematic is the sharp rise in the percentage of heavy traffic.

To upgrade the Rhine Bridge for high traffic loads, it will get a new surface of special concrete which, in conjunction with the steel road slab, will increase its load-bearing capacity. The technology used was developed in the Netherlands and has been widely used there. “In Germany, this method was first used in 2014 in a pilot project at a bridge in Beimerstetten. That’s also when the suitability for the repair of the Maxau Rhine Bridge was reviewed,” say Professor Frank Dehn and Dr Michael Haist from the Institute of Concrete Structures and Building Materials (IMB) and the Materials Testing and Research Institute (MPA) at KIT. Both institutes are responsible for evaluating the high-performance concrete that is used in the restoration and upgrade. The extremely high strength of the concrete can reduce its thickness and, as a result, significantly lower the additional load on the bridge. At the same time, the composite road slab dampens vibrations caused by traffic, protecting the steel structure. A special mix of fibers and steel reinforcement counteracts possible cracks in the highly stressed concrete.

Engineers at KIT are providing scientific support for the repairs of Maxau Rhine Bridge: “Using various sensors, we are measuring the bridge’s load-bearing behavior before and after the repairs to verify improvements and establish suitable techniques for other bridges,” says Thomas Umnenhofer, explaining the contribution of KIT’s VAKA. Together with his colleague Philipp Weidner, the engineer is developing a suitable numerical structural model of the bridge, which is then available for further analysis. “We will validate this model with actual measured values to develop an approach that can serve as the basis for further bridge repairs,” says Daniel C. Ruff. His team is already carrying out initial measurements and load tests.

“IMB and MPA are examining and evaluating the concrete developed by the companies involved, and are advising the Karlsruhe authorities on technical issues,” says Frank Dehn. “At the same time, we are continuously measuring the deformation behavior of a sample component manufactured in September”.

About the repairs of the Rhine Bridge

Since the concrete needs to be specially adapted to the local conditions of the Maxau Rhine Bridge, its properties have been subjected to extensive tests in the laboratory. “Installation of this special concrete is technically extremely demanding. Handling had to be tested on several sample components,” says Michael Haist, who has been supporting the project since 2013. Now that necessary examinations of these sample components have been satisfactorily concluded, the repairs will begin in November 2018 and probably be completed in December 2019.

The Research Center for Steel, Timber, and Masonry at KIT (VAKA)

VAKA was founded in 1921 and comprises the areas of Steel and Lightweight Structures, and Timber Engineering and Engineering Structures. In the field of building inspection, VAKA is a recognized international testing, monitoring and certification center. Scientists at VAKA apply the results obtained from many research projects to concepts that are transferable to the field.

IMB was founded in 1916 and MPA in 1919. One area of scientific focus for many decades has been the development, testing and evaluation of high-performance concrete. MPA is a nationally recognized and EU-notified testing, monitoring and certification center. The concrete and material models developed at the institute are used worldwide and are established in virtually all national and international standards and rules.