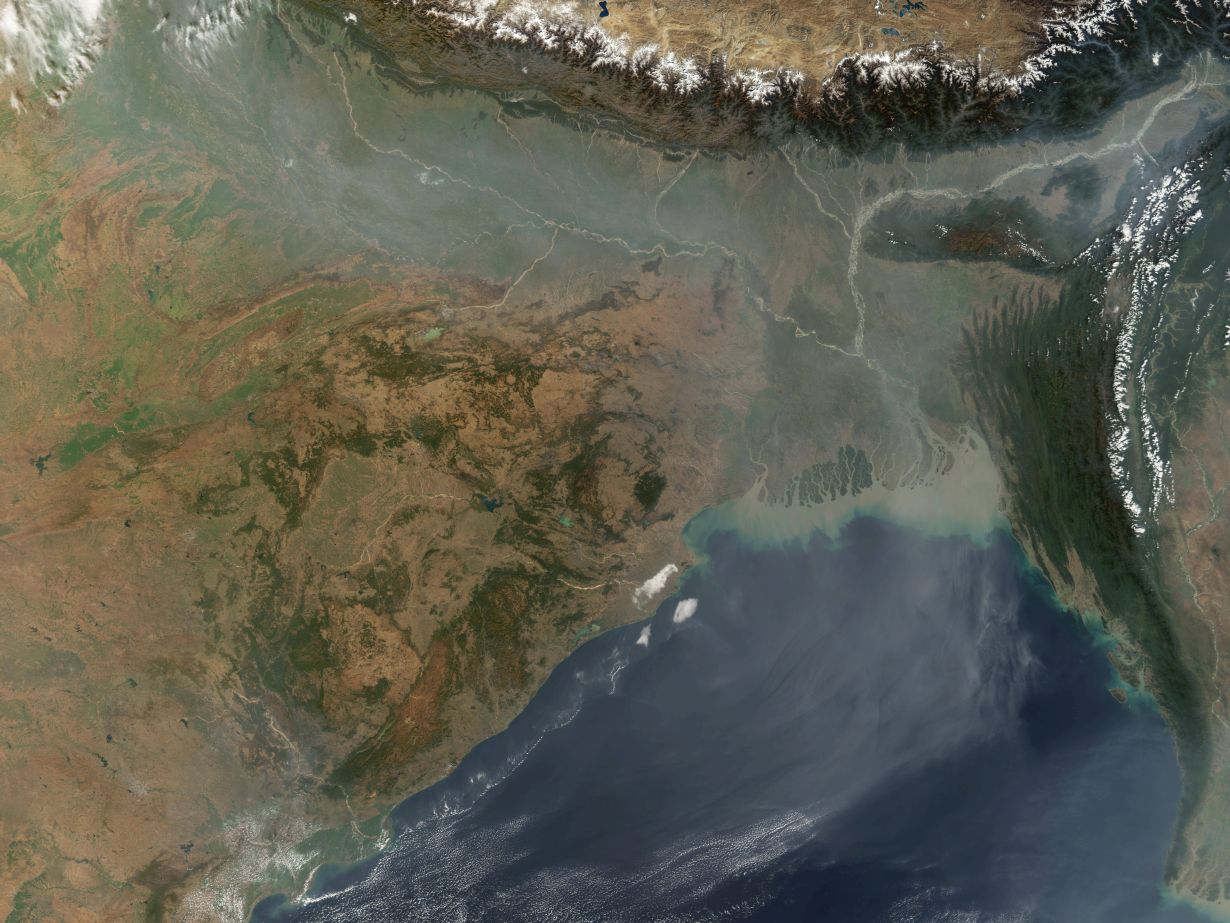 To examine the interaction between air pollution and the South Asian monsoon, scientists have covered 100,000 kilometers in an aircraft mission. Measuring devices from Karlsruhe Institute of Technology (KIT) were also on board. The measurement campaign was coordinated by the Max Planck Institute for Chemistry. One of the things the mission showed was that a monsoon cleanses the air of the majority of pollutants but distributes the rest across the entire globe. The complete results are published in Science.

The atmospheric effects of anthropogenic air pollution from the combustion of fossil fuels and biomass during the dry season in South Asia are obvious from satellite images year after year. Between December and March visibly polluted air, also simply referred to as “atmospheric brown cloud” in scientific literature, moves from India across the Indian Ocean. There is no improvement in sight for this situation. In fact, in the last decade, the nitrogen oxide and sulfur dioxide emissions in South Asia have increased by 50 percent. This in turn made scientist wonder even more about what is happening with the pollutants during the South Asian monsoon, in other words in the summer. A monsoon is created as soon as air masses are heated up over the Indian subcontinent during the summer months and the warm air rises. At the same time, moist ocean air is sucked in, resulting in heavy rain and thunderstorms. When this massive weather phenomenon spreads from the Mediterranean to the Pacific from June to October, the brown cloud disappears in its updrafts and thunderstorm systems.

New insights on the whereabouts of the pollutants are now provided by the international OMO project (Oxidation Mechanism Observations) coordinated by the Max Planck Institute for Chemistry in Mainz, in which scientists from KIT are also involved. The project showed that some of the pollution is converted into water-soluble substances by chemical reactions and is literally washed out with the rain. “The high humidity level and the many lightning strikes create a particularly large number of hydroxyl radicals. These are especially responsive molecules of hydrogen and oxygen that have the effect of a powerful detergent for the atmosphere,” says Dr Andreas Zahn from the Institute for Meteorology and Climate Research (IMK) at KIT. According to Zahn, these radicals (OH) first oxidize air pollutants which then dissolve in water in the form of less harmful compounds and then rain down on earth, similar to the well-known “acid rain”. However, not all pollutants are washed out in the process: “Some of the air pollution remains in the air and even ends up in the stratosphere above an altitude of 20 kilometers.” As soon as the pollutants reach this altitude, they will be spread all over the world. According to findings from the research project, this applies to about ten percent of the harmful sulfur dioxide from South Asia.

For their investigations, scientists used the HALO research aircraft (High Altitude – Long Range) from the German Aerospace Center (Deutsches Zentrum für Luft- und Raumfahrt; DLR) over several months in 2015 to carry out their measurements between Cyprus and the Maldives at an altitude of 9 to 15 kilometers. Apart from OH, they also determined numerous other chemical compounds such as sulfur and nitrogen oxides, ozone, aerosol particles, chlorinated molecules, hydrocarbons, organic compounds, and the most important greenhouse gases to obtain information about the chemical processes in the atmosphere.

Atmosphere researchers from KIT developed two particularly light and sensitive instruments for the HALO research aircraft. One of them analyzed the concentration of ozone with a high temporal resolution of ten measurements per second. Here, ozone is used as an indicator of the reactivity of the air as well as a marker for reaching the ozone-rich stratosphere. The second instrument, a complex chemical mass spectrometer, captured the smallest traces of organic compounds such as acetone which is an important source for the hydroxyl radicals. It was also used to examine the origin and whereabouts of the “brown cloud”: “We were able to prove that India is an important source of pollutants, particularly of organic compounds,” says Dr Marco Neumaier, the scientist responsible for this instrument. Previously, the source was located mainly in China.

About HALO
The HALO research aircraft is a joint initiative of German environmental and climate research institutions. HALO was funded by the Federal Ministry of Education and Research, the Helmholtz Association and the Max Planck Society. The operational costs of HALO are shared by the DFG, the Max Planck Society, the Jülich Research Center, Karlsruhe Institute of Technology, the GFZ German Research Center for Geosciences in Potsdam and the Leibniz Institute for Tropospheric Research in Leipzig (TROPOS). DLR (GermanAerospace Center) both owns and operates the aircraft.