Neutrinos Weighed by the World´s Most Precise Scale 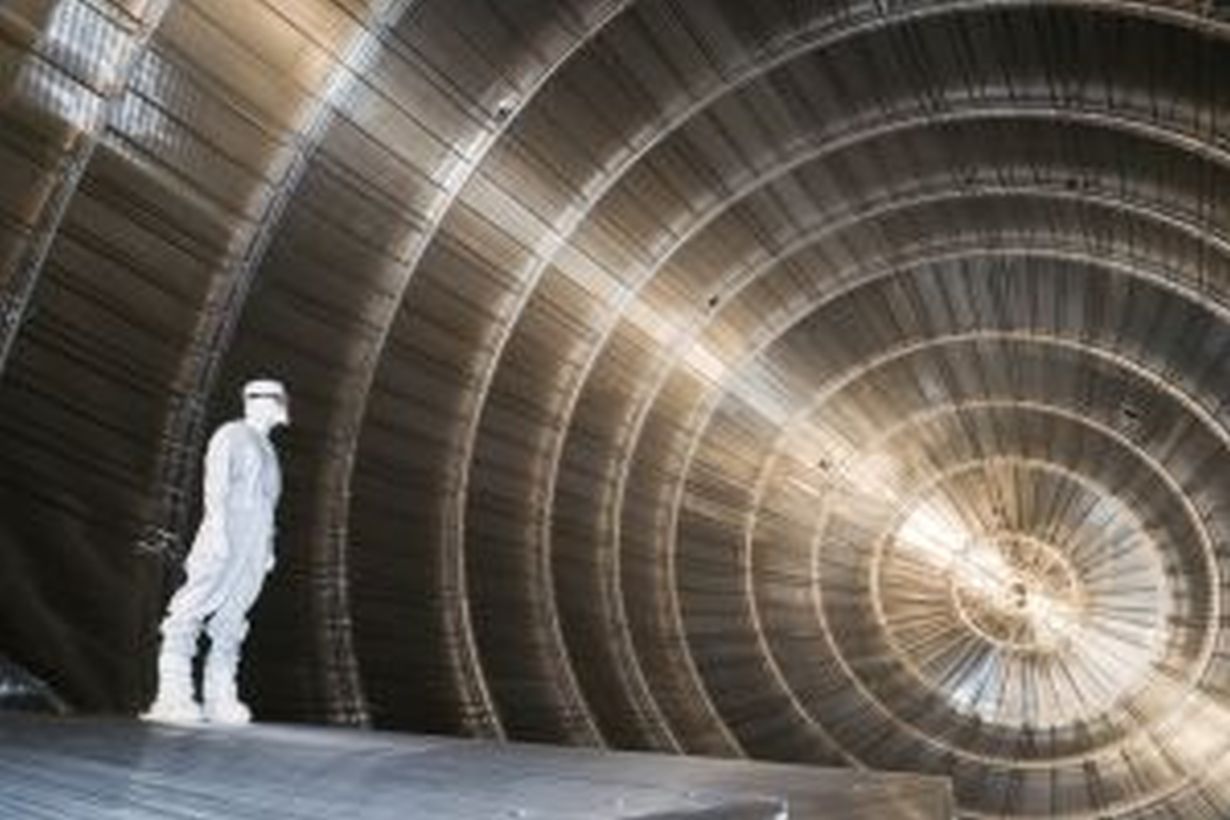 What is the mass of neutrinos?  To answer one of the most fundamental and important open questions in modern particle physics and cosmology, the KATRIN Karlsruhe Tritium Neutrino Ex-periment was designed and built by an international collaboration at Karlsruhe Institute of Technology (KIT) in southwest Germany. A special Inauguration Colloquium on June 11 marks the start of its long-term data taking phase.

The Karlsruhe Tritium Neutrino Experiment KATRIN now starts to weigh the mass of neutrinos. Following the electrostatic spectrometer and the detector unit, the tritium source was installed as the last of the large components of KATRIN. The ambitious and highly motivated team of physicists, engineers, and technicians is well-trained and looks forward to the challenges in determining the neutrino mass.

Germany’s Federal Minister of Research Anja Karliczek says: ”KATRIN is an experiment of superlatives and will complement the knowledge about our universe by a decisive piece of the puzzle. I congratulate the KIT and the research collaboration on the successful assembly of this complex experiment. Together with you, I look forward to the start of the measurement phase and the first research results. Such an important experiment on German territory strengthens Germany as a location of research.” With a share of around 75%, the Federal Ministry of Research was the biggest funding partner by far. It invested about 50 million euros in the building of KATRIN.

“Large-scale research facilities promote technological development and provide an inspiring work environment for researchers and students at KIT, the Research University in the Helmholtz Association,” concludes Professor Holger Hanselka, President of Karlsruhe Insitute of Technology. “With KATRIN, an international research community has found its home at KIT, and it will be interesting to see which fascinating insights into the universe will be opened up by this creative interdisciplinary team.”

“Neutrinos have adopted the role of much-noticed superstars in the zoo of known elementary particles, and their impact on our modern view of the macro- and microcosm dwarfs that of other particles” outlines Guido Drexlin, Professor of KIT and Scientific Co-spokesperson of KATRIN. Also cosmologists pay a great deal of attention to the unique role of the large number of relic neutrinos as “ghost particles of the universe” in shaping the large-scale structures in our cosmos. Their exact role as cosmic architects depends on their rest mass, which is unknown at present.

“It is only in the last two decades that we know neutrinos to possess a finite rest mass – in sharp contrast to long-held expectations of particle theorists. This breakthrough is due to professors Arthur B. McDonald (Queens University, Canada) and Takaaki Kajita (Tokyo University, Japan) and their international teams,” Guido Drexlin continues. They were the first to obtain irrefutable evidence of neutrino flavor transitions, which earned them the Nobel Prize in Physics in 2015. Today, the non-zero rest mass of neutrinos remains the sole indication of novel physics beyond the Standard Model to have been verified in the laboratory.

The discoveries of McDonald and Kajita show that neutrinos have mass, but do not tell us how much. KATRIN will make use of different physics principles and experimental methods to perform a model-independent measurement of the neutrino mass. The two Nobel laureates, who are in close contact with KATRIN, will attend the Inauguration Colloquium, as will many other international colleagues. “KATRIN is an international flagship mission, and we are very keen to learn about its first results,” stated both laureates prior to the milestone event, where high-purity molecular tritium gas will be injected for the first time into the KATRIN source as ß-emitter.

Later, about 100 billion ß-decay processes of molecular tritium per second will release an electron and a neutrino each, which share among them the 18.6 keV decay energy in a statistical process. In extremely rare cases, the neutrino turns up almost “empty-handed,” while the electron obtains nearly the entire energy. Einstein´s famous formula E=mc² tells us that the invisible neutrino has to carry away at least its rest mass, which the electron then lacks. It is this minute amount of missing energy in the electron energy spectrum that the KATRIN neutrino scale hunts for, down to a level of 0.2 eV (corresponding to the inconceivably small mass of 3.6 x 10-37 kg), which is an order of magnitude more sensitive than previous experiments. This called for an unprecedented tritium source strength, scaled up by a factor of 100, and much improved spectroscopy properties. “KATRIN is a true technological marvel,” raves Ernst Otten, emeritus professor of Mainz University, one of the founding fathers of KATRIN, who headed the former Mainz neutrino mass experiment.

During the commissioning phase, the KATRIN team successfully tested many technological novelties and reached several world records. “An incredible success story is our ultra-precise high-voltage system and the 700 m² wire-based electrode system for the very large spectrometer,” says Christian Weinheimer, Professor of the University of Münster, who also is Scientific Co-spokesperson of KATRIN. He and his team have developed and built several important key com-ponents and, thus, contributed significantly to the success of the project. Several novel technologies developed for KATRIN now are used in other experiments as well and are applied by other disciplines. The international KATRIN team recently succeeded in mastering a final challenge: The very stringent requirements on the stability of the source parameters were improved by one order of magnitude.

The tritium source of KATRIN is housed inside a 16 m long highly complex cryostat that is located – as are all other source components – in the Karlsruhe Tritium Laboratory (TLK). TLK offers a unique tritium infrastructure and expertise worldwide, which is the reason why KATRIN is located at KIT. Electrons in huge numbers from the source are guided by strong superconducting magnets to the very large electrostatic spectrometer, the heart of KATRIN. In 2006, this enormous vessel was shipped in a spectacular sea-going voyage from the manufacturer in Upper Bavaria to KIT via the Danube river, the Mediterranean and the North Seas, and the river Rhine. For many years now, the spectrometer has held the record of being the world´s largest ultra-high vacuum vessel with a final pressure as low as on the lunar surface. A system of active and passive pumping systems ensures that no tritium molecule advances to the extreme vacuum of the spectrometer.

After several years of planning, construction, and commissioning of the major components of the 70 m long setup, the nearly 200 members of the international KATRIN Collaboration from 20 institutions in 7 countries now look forward to the imminent start of the measurements in June 2018. “I am very proud of our enthusiastic team with its great commitment and its broad expertise,” emphasizes Drexlin, who also coordinated the assembly of KATRIN at KIT as a project head. “My cordial thanks go to the Federal Ministry of Education and Research and the Helmholtz Association which supported and financed the setup of KATRIN over a period of many years.”

“The unique properties of source and spectrometer are of major importance for the complex KATRIN data analysis”, emphasizes Dr. Kathrin Valerius, who leads a Helmholtz Young Investigator Group at KIT. Together with her young female colleagues, professors Susanne Mertens from the Max Planck Institute for Physics and the Technical University of Munich and Diana Parno from Carnegie Mellon University, USA, she leads and coordinates the work of the international analysis team. “The first weeks of data taking under nominal conditions will be most challenging and exciting, as we enter uncharted experimental terrain,” the three young analysis specialists agree. Their international team consists of postdoctoral and PhD researchers as well as master’s and bachelor’s students. The ambitious and highly motivated team is well-trained and looks forward to the challenges in determining the neutrino mass.

With the official Inauguration Colloquium on June 11, the KATRIN team has realized a long-standing dream. “Only with determination, enthusiasm, and a good dose of boldness can a pioneering project, such as KATRIN, be implemented,” Hamish Robertson, Professor of the University of Washington in Seattle, USA, and long-term US Spokesperson of KATRIN, summarizes the long way from the first ideas in 2001 up to today. As inventor of the gaseous molecular tritium source in use at KATRIN and coordinator of the important US activities for KATRIN, he can look back on several decades of milestones in neutrino research.

The two co-spokespersons explain: “Our path has been full of challenges. Now, we are at the start of data taking and look forward to exciting KATRIN results, as was good tradition in experimental neutrino physics over the past decades.” They and the entire team expect the future measurements which will last well into the next decade to produce high-impact results.

Further Material
Video "How much does a neutrino weigh? The KATRIN experiment at KIT": https://youtu.be/bLfSc0LIqiw