Moving towards Fast Internet on the Plane

For the First Time, Researchers Reach a Data Transfer Rate of 8 Gigabits per Second Between Plane and Ground 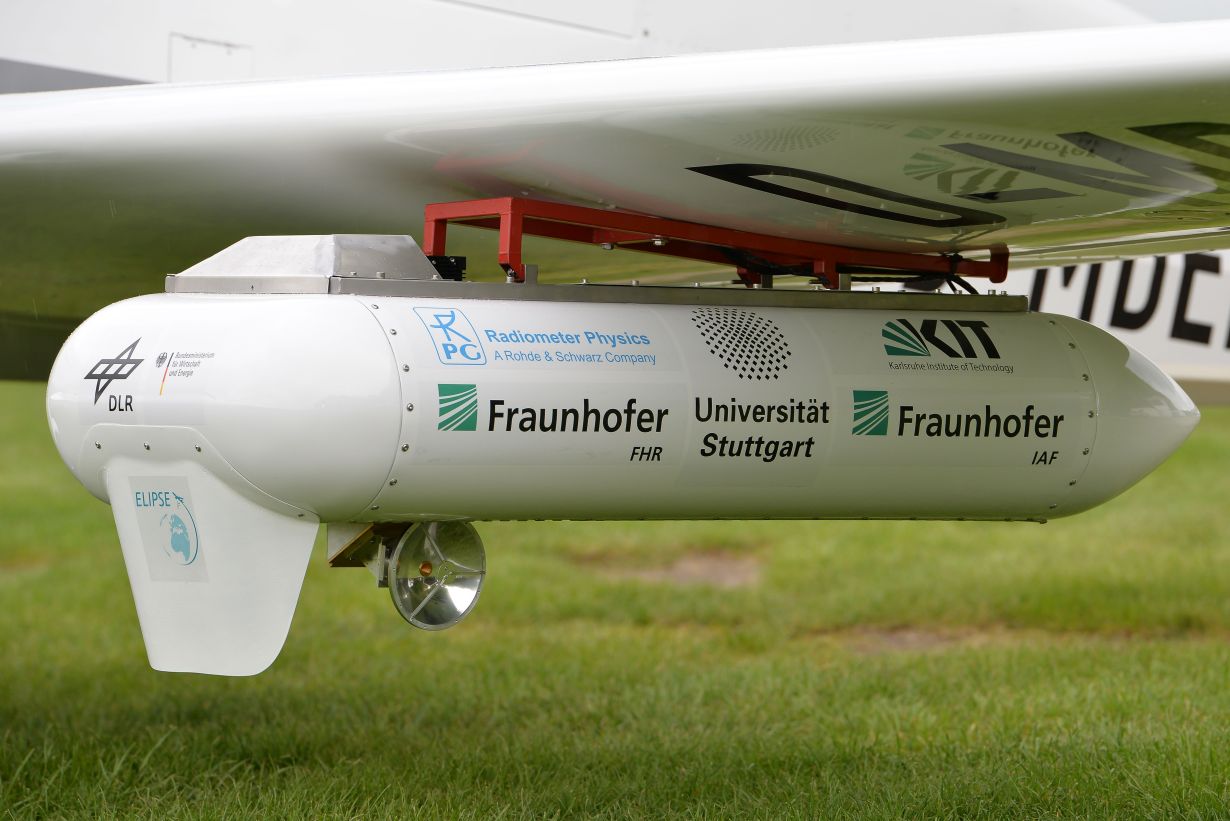 Transmitter attached to the wing of the aircraft. A small parabolic antenna ensures correct orientation towards the ground station. (Photo: R. Sommer/Fraunhofer FHR)

Streaming films and music or accessing business data in the cloud when flying to the holiday destination or to business meetings – this is the dream of passengers as well as airlines. So far, however, fast internet on the plane has failed due to the lacking capacity of data connections between the plane and the ground. For the first time now, a team of researchers also of Karlsruhe Institute of Technology (KIT) has transferred signals at a rate of 8 gigabits per second between an airplane and a ground station.

The researchers reached this high data rate by using the radio frequency range between 71 and 76 gigahertz for the air-to-ground radio connection. In this range just released by the authority for such purposes, large bandwidths are available for achieving multi-gigabit data rates. In the future, broadband internet and video-on-demand might be made available on passenger airplanes. Or high-resolution videos or sensor data might be transferred continuously and uncompressed from an airplane, an earth observation satellite, or a drone to the ground.

“The frequencies now available represent a good compromise between the achievable data rate and susceptibility to interference,” says Thomas Zwick, Head of the Institute of High-Frequency Technology and Electronics of KIT. The data rate achieved now enables simultaneous transmission of up to 600 different 4K video streams, corresponding to about 16 megabits per second. World-spanning satellite networks seamlessly integrated in glass fiber and radio networks on the ground by this technology can provide globally available broadband internet and enable an increasing number of data-intensive services on the internet of things. Moreover, it will be possible to read out constantly growing data volumes on the operation of the airplane within shortest periods of time from the onboard storage system, as the aircraft approaches or passes by. Today, this is still done by cable while the plane is on the airfield, which takes time and, hence, makes the novelty highly interesting for the airline companies.

During the test flight, the research aircraft circled around the receiver station at a radius of five to twelve kilometers and a height of 1000 m. A KIT-developed control system for the parabolic antenna on the ground ensured precise orientation to the airplane. The broadband connection remained stable for three minutes during a complete overflight at a radius of five kilometers. With a data rate of 8 gigabits per second, this corresponds to a data volume of 180 gigabytes. The connection also works under bad weather conditions with clouds, rain, and fog. The experiment was carried out under the research project “ELIPSE” funded by the German Aerospace Center and the Federal Ministry for Economic Affairs and Energy. Apart from KIT, Stuttgart University, Radiometer Physics GmbH, and the Fraunhofer Institutes for Applied Solid State Physics IAF and for High Frequency Physics and Radar Techniques FHR were involved.