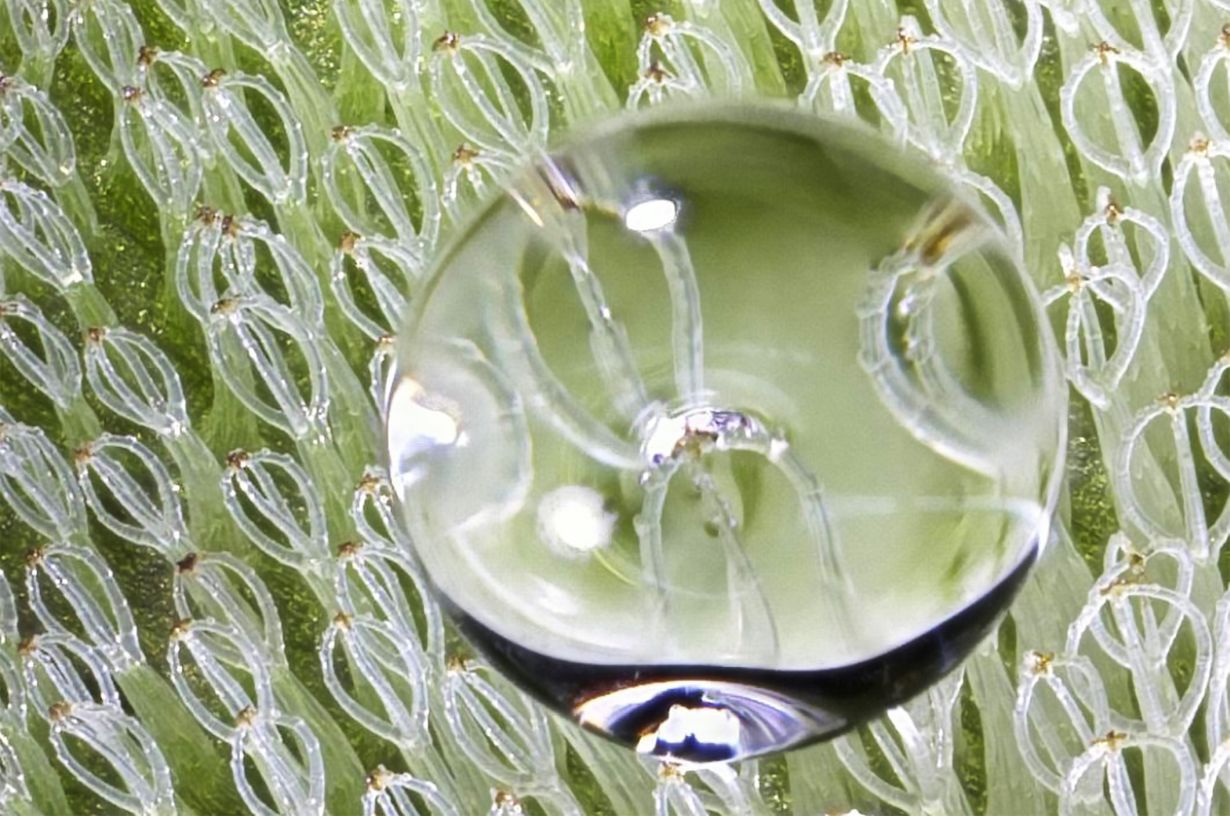 The highly water-repellent surface of floating fern (salvinia) serves as a model of the AIRCOAT technology. (Photo: Schimmel Team, KIT)

Under the AIRCOAT project, researchers from all over Europe develop an air coating that reduces frictional resistance of ships. They use the salvinia effect studied by Karlsruhe Institute of Technology (KIT). It allows an air layer to permanently exist under water. The European Commission funds AIRCOAT with a total of EUR 5.3 million. Of these funds, KIT receives about 1 million euros. The project is coordinated scientifically by physicist and nanotechnology expert Professor Thomas Schimmel, KIT.

The project started on May 01, 2018 and is scheduled for a duration of three years. It is coordinated by the Fraunhofer Center for Maritime Logistics and Services (CML), Hamburg. AIRCOAT (Air Induced friction Reducing ship COATing) is aimed at developing a passive air lubrication technology for ships, which contributes to the protection of the seas and the atmosphere. A self-adhesive foil attached to the ship’s hull generates a thin air layer that significantly reduces frictional resistance and, at the same time, acts as a physical barrier between the hull’s surface and the water. As a result, fuel consumption and exhaust gas emission of the ship can be reduced considerably. The air coating also reduces the emission of noise. Moreover, it prevents sea organisms from settling on the hull, so-called fouling, and a release of biocides from coatings below into the water.

The innovative air coating method is a bionic application modeled on nature. AIRCOAT is based on the salvinia effect discovered jointly by botanist Professor Wilhelm Barthlott of Bonn University and physicist Professor Thomas Schimmel of KIT. This effect enables certain plants, such as floating fern (salvinia), to breathe under water. They retain a thin air layer on the surface of their leaves, which is covered by hair-like structures and is highly water-repellent. The AIRCOAT project technologically implements this effect of maintaining air layers on surfaces under water on a self-adhesive foil system.

The scientific coordinator of AIRCOAT, Professor Thomas Schimmel, who works at KIT’s Institute of Applied Physics (APH), Institute of Nanotechnology (INT), and at the Center for Functional Nanostructures (CFN), and his team, together with the universities of Bonn and Rostock, studied the salvinia effect under the ARES project funded by the Federal Ministry of Research and under a project funded by the Baden-Württemberg Foundation. “After we understood the salvinia effect, we recognized the enormous economic and ecological potential of its technical implementation,” Thomas Schimmel says. “We developed a method to produce an artificial surface that imitates the effect in the laboratory. An early prototype that was put under water more than five years ago, still is covered by a permanent air layer!”

The AIRCOAT consortium now optimizes the new technology and studies the surface properties experimentally and numerically. Afterwards, the researchers plan to demonstrate the efficiency and industrial feasibility on the laboratory scale, on research ships, and on container ships. A comprehensive validation process will prove the benefit for industry and the environment. Scientists of various disciplines collaborate under AIRCOAT, from applied physics to nanotechnology, experimental and numerical fluid mechanics, bionics, to ship technology and ship emission modeling. In addition, industry experts in the areas of ship coating, eco-toxicology, and self-adhesive foil technologies as well as container ship operators are involved in the project.