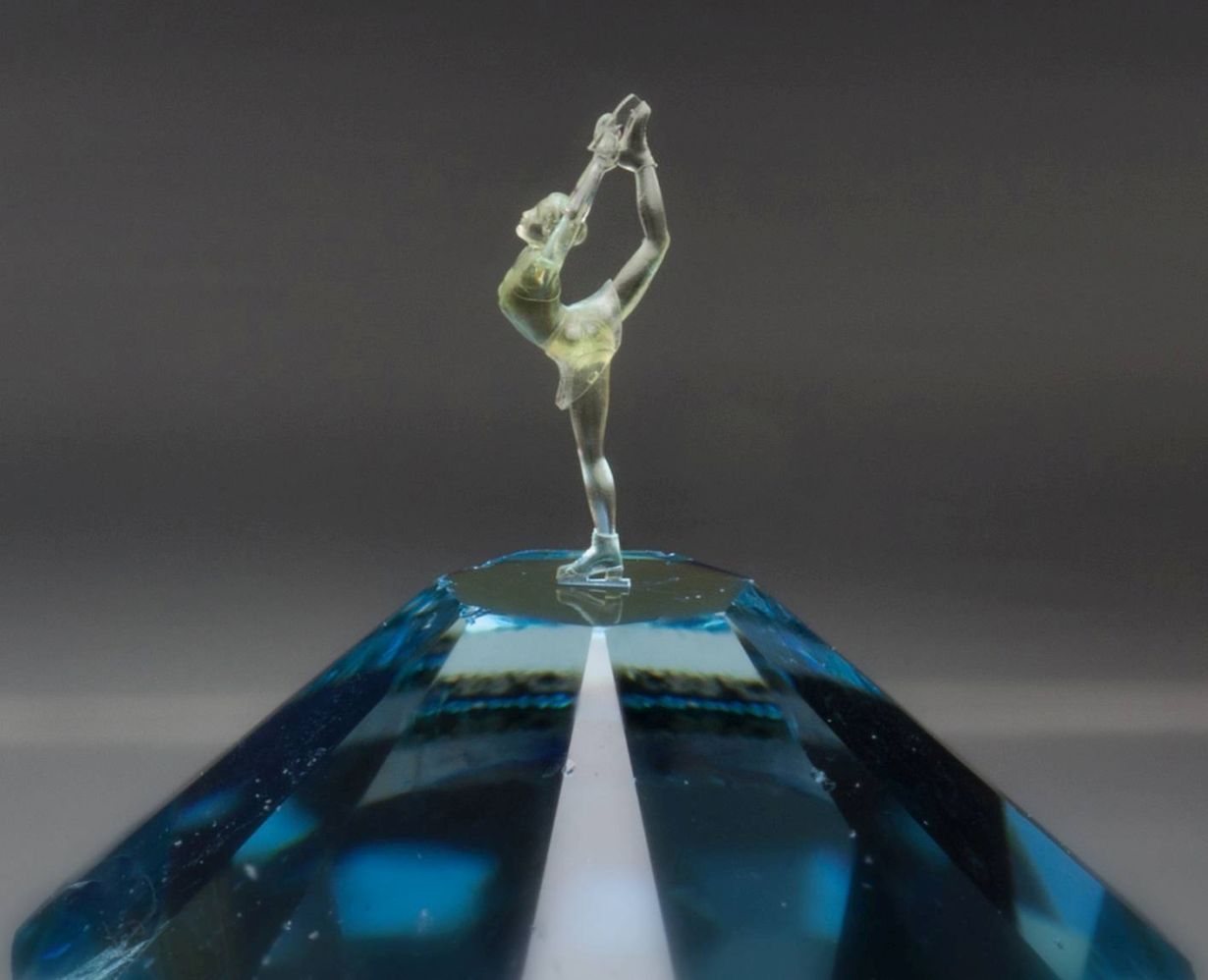 The figure skater of only 3 mm height was printed onto the tip of a crystal. (Photo: Nanoscribe)

Taking sharper photos with the smartphone, stimulating nerves electrically with a clamping lock, or growing cells in an optimal environment, all this is made possible by a revolutionary superprecise 3D printing process developed by researchers of Karlsruhe Institute of Technology (KIT). A manufacturing method that once was a scientific niche has quickly evolved as a business into a world market leader with revenues in the millions in a booming high-tech market. For this translation of scientific findings into economically successful and useful products, the Institute of Nanotechnology and the Innovation Management Service Unit of KIT as well as the Nanoscribe company are granted the Technology Transfer Prize by the German Physical Society (DPG).

In 3D laser lithography, a computer-controlled laser beam hardens structures in a photoresist, whose smallest dimensions are less than one thousandth of a millimeter. The technique can be applied, for instance, to produce highly stable materials composed of miniature grids, very small and very precise lenses for sensors and optics, and tiny scaffolds for cultivating cells in body-like environments. Originally, the process was used for manufacturing so-called photonic crystals for optical telecommunications only. Martin Wegener, Professor of the Institute of Applied Physics and one of the Directors of the Institute of Nanotechnology of KIT, however, recognized that this technique is suitable for the production of almost any complex three-dimensional micro- or nanostructure and perfected it with his research group. “In the beginning, it appeared to be completely out to lunch and to be of interest to a few freaks only. Today, it is the most precise 3D laser printer on the market, offering all options and strengths of 3D printing,” Wegener says.

Interest of science and industry worldwide in the laser printers made in Karlsruhe is great: “Today, more than 150 of our devices are in use in more than 30 countries in the world,” says Nanoscribe Managing Director Martin Hermatschweiler, who established the company in 2007 together with Wegener. They started with four persons. Today, Nanoscribe GmbH, with a revenue in the double-digit millions, has around 60 employees and intends to employ even more. “Licensing of several patents by KIT’s Innovation Management Service Unit and the partnership with ZEISS contributed decisively to this success,” Martin Wegener says. In late 2019, the company plans to move to the new ZEISS Innovation Hub at KIT. It is currently being built with investments in the amount of EUR 30 million by the Technology Group that is based in Oberkochen. In the close vicinity of KIT, the Hub will offer spinoffs like Nanoscribe an optimal environment for successful growth. ”Support of startups and of the teams founding them is one of our core tasks in technology transfer,” Dr. Jens Fahrenberg, Head of the Innovation Management Service Unit of KIT, says. “In the case of Nanoscribe, this ranged from the first grants to licensing to establishing the company in our incubator,” he describes the way from the business idea to economic success.

All parties consider the DPG prize another recognition of their joint efforts. The Technology Transfer Prize will be handed over by the DPG on Wednesday, March 07, in Erlangen.